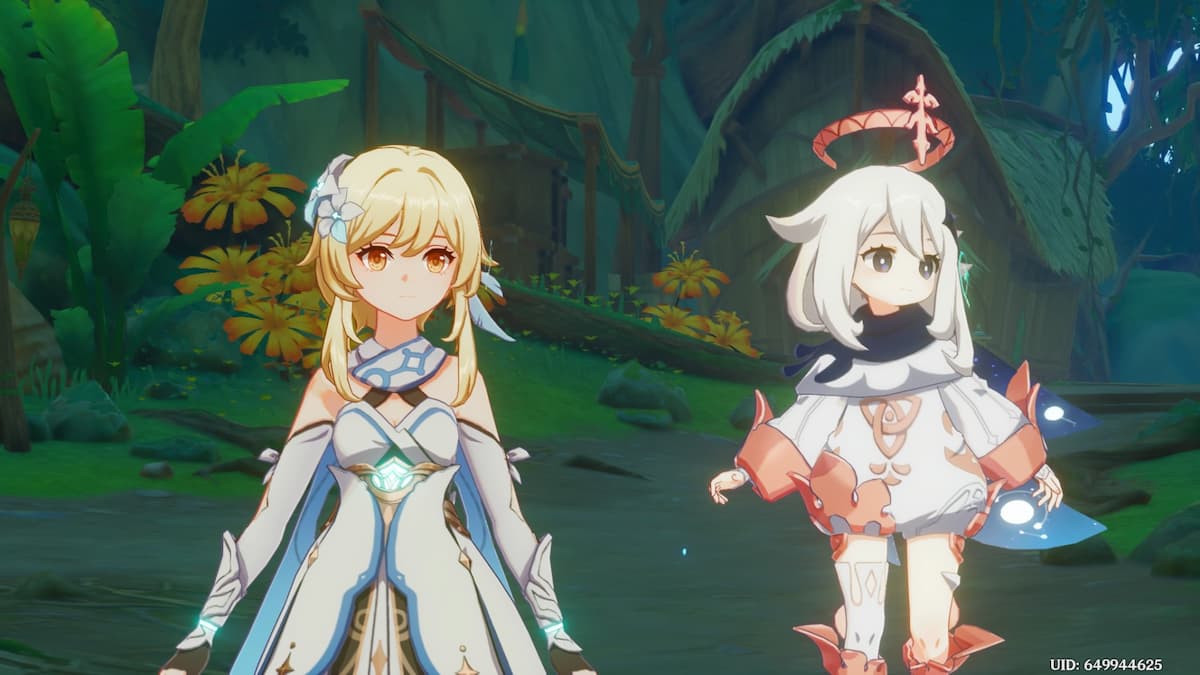 The latest Version 3.0 update of Genshin Impact features the next storyline in the Archon quests that introduces the latest lineup of characters. So, to help you with this new map, we’ll provide you with a step-by-step guide to the first mission of the area, Through Mists of Smoke and Forests Dark. Additionally, we’ll show you what conversation options you need to pick and the requirements you have to meet before starting a task.

After you’ve completed the previous Archon quests in Genshin Impact, a waypoint for the Through Mists of Smoke and Forests Dark quest will spawn near The Chasm (this will be the entrance to Sumeru.) While you explore the new map, you’ll start following a resident of the area. But, just as you get closer to this mysterious person, the Traveler begins to feel light-headed and enters a dream-like state in a magical domain.

When the character finally wakes up, they are greeted by Tighnari and Collei, who are rangers of the Avidya Forest. At this point, you’ll need to help them with the following quests:

The Trail of the God of the Wisdom

Tighnari will tell you to go to Sumeru City, where you’ll learn about the Akasha Terminal system that allows you to access any knowledge you need. Players must also use this time to give the researcher, Rohawi, the letter that Tighnari previously gave them.

The primary goal of the Through Mists of Smoke and Forest Dark quest is to meet the Dendro Archon, similar to other missions of Genshin Impact. Unfortunately, the people of Sumeru can only provide you with vague information about the Lesser Lord Kusanali. Thus, you’ll need to wait until you meet Dunyarzad and Dehya to gather more knowledge.

The two characters will introduce you to Nilou, a performer of the Zubayr Theater, and ask you to celebrate the Sabzeruz Festival with them. During this time, you’ll need to walk around the Grand Bazaar and interact with five residents that will have waypoints on the map:

Before you continue to the next narrative in Genshin Impact, you should finish The Unappreciated Carving quest (a side story that will spawn after you complete The Trail of the God of the Wisdom.) If you don’t do this mission, it will prohibit you from doing one of the tasks within Lost in Prosperity.

The Unappreciated Carving shouldn’t take too long to finish since it mainly consists of dialogue scenes between various characters. The only instance where you may run into some trouble is when you have to search for three items on the Aranara’s trail, which you can find here:

Once players have collected enough information from Sumeru City, they’ll embark on an adventure to Port Ormos. While you are here, you must pose as a student from Akademiya, so try to stray away from telling anyone about your true origins. For example, when you question the Eremites, tell them, “I’m a student from the Akademiya,” to avoid suspicion. Moreover, you must give them 500,00 Mora to get details about Greater Lord Rukkhadevata (you’ll get this money back at the end of the conversation.)

Then, players will meet the character, Alhaitham, who will send you on a quest to befriend Dori. In this discussion, he will explain how to use Elemental Sight on two objects, and you’ll need to choose ‘The one on the left shines brighter.’

Alhaitham will give a set of instructions that you’ll need to follow. Here are the correct options that you must select for this current task of the Through Mists of Smoke and Forests Dark quest:

In the last phase of the Genshin Impact quest, you’ll partake in several combat tests and use the Canned Knowledge in your inventory. After players complete the challenges, they can use the Paimon menu to change the clock to 7:00 (the Day After Tomorrow.) As time passes, you must battle the Eremites you previously talked to, ending the Through Mists of Smoke and Forests Dark quest.

Now that you have completed the Through Mists of Smoke and Forests Dark quest in Genshin Impact, you can be ready for the second Act of the Archon storyline. If you want more content about the game, you can explore the relevant links below and view the latest details about Version 3.1.