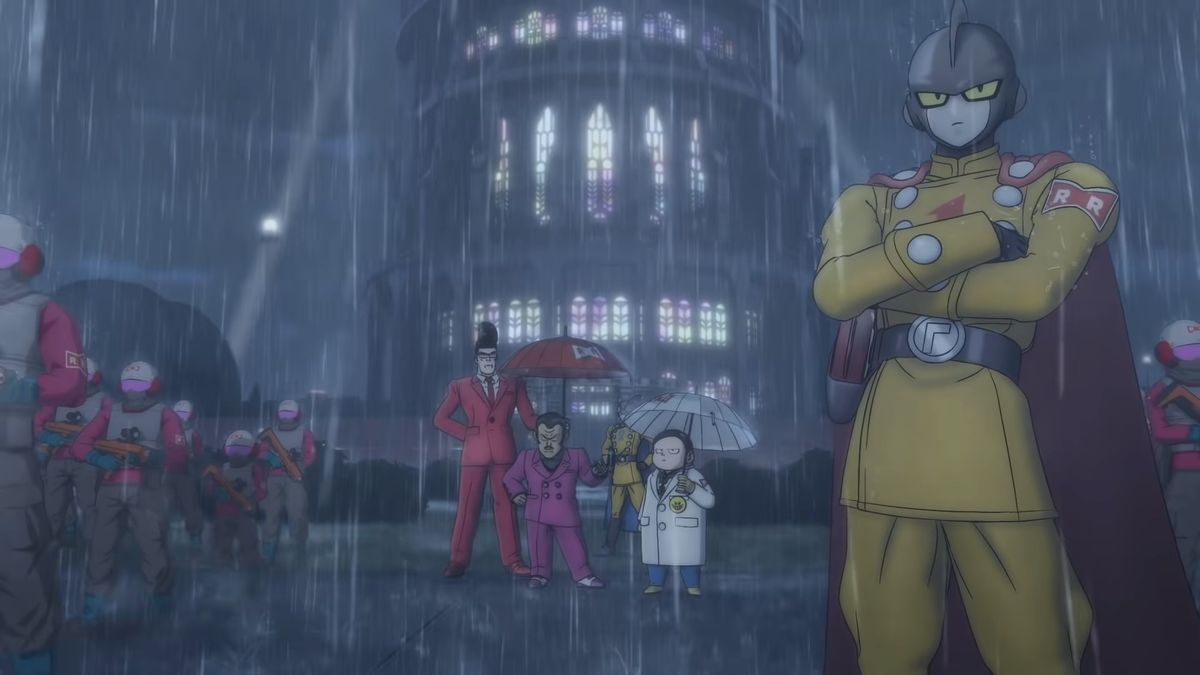 The villains of Dragon Ball Super: Super Hero are the returning Red Ribbon Army. The villainous organization first appeared as major antagonists to Goku in his earliest adventures as a child in the original Dragon Ball anime, and are best known for the creation of the androids. It was thought that the RR Army was gone for good when their last member Cell was defeated by Gohan in Dragon Ball Z, but DBS: Super Hero reveals that the organisation have restructured themselves as Red Ribbon Pharmaceuticals.

The RR Army hasn’t posed a threat to Goku and the Z Warriors for some time, but their new leader Magenta desperately seeks revenge on Goku’s family while returning the Red Ribbon Army to their former glory in the process. Below are the key members of the new Red Ribbon Army.

Magenta is the president of Red Ribbon Pharmaceuticals and the son of Goku’s old enemy Commander Red, the leader of the original Red Ribbon Army. Seeing the organisization as a shell of its former self, Magenta seeks out Dr. Gero’s grandson – Dr. Hedo – to construct new androids to combat the Z Warriors.

While Magenta is the public face of his pharmaceutical company he is also the ruthless leader of the small cluster of RR Army troops still remaining. Magenta holds a grudge against Goku and his family and enacts the plan to take out Gohan after kidnapping his daughter Pan. In the Dragon Ball Super: Super Hero dub Magenta will be played by legendary voice actor Charles Martinet who is best known as the voice of Mario!

Dr. Hedo is the grandson of the Red Ribbon Army’s chief scientist Dr. Gero who was responsible for the creation of the RR Army’s androids and Cell. Hedo is a superhero fan and isn’t too fond of his connection to his Grandfather for the trouble it caused his family. However, Magenta is able to manipulate him and persuades him to construct the ultimate android superheroes after making him believe that Capsule Corporation serves as the base for a race of aliens set on world domination.

Dr. Hedo isn’t much of a physical threat but through his experiments he’s managed to toughen his skin and is aided by his robotic spy, Hachimaru.

Carmine is Magenta’s second in command, chauffeur, and confidant. The relationship between Magenta and Carmine directly contrasts the relationship his Father Commander Red had with his second in command, Staff Officer Black. Commander Red regularly abused and undermined Staff Officer Black while Carmine and Magenta have a respectful relationship. Carmine is dedicated to Magenta’s cause to restore the Red Ribbon Army and will go to any means neccessary to achieve that.

Gamma 1 and 2 are the ultimate superhero androids created by Dr. Hedo to protect the public image of Red Ribbon Pharmaceuticals. The two were designed by Dr. Hedo to resemble a superhero he met a signing event and throughout the film combat Gohan and Picollo. Both Gamma 1 and Gamma 2 are firm believers in justice and at times question the motivations of the Red Ribbon Army. Similarly to Carmine and Magenta, these two androids have a contrasting relationship with their creator. Both Androids 17 and 18 despised Dr. Gero where as both Gamma 1 and 2 are prepared to put their lives on the line to protect their creator Dr. Hedo.

That’s everything we know about Dragon Ball Super: Super Hero. It’s a huge week for Dragon Ball so be sure to check out twinfinite for more coverage on DBS: Super Hero and our guides to Fortnite’s Crossover event with Dragon Ball.