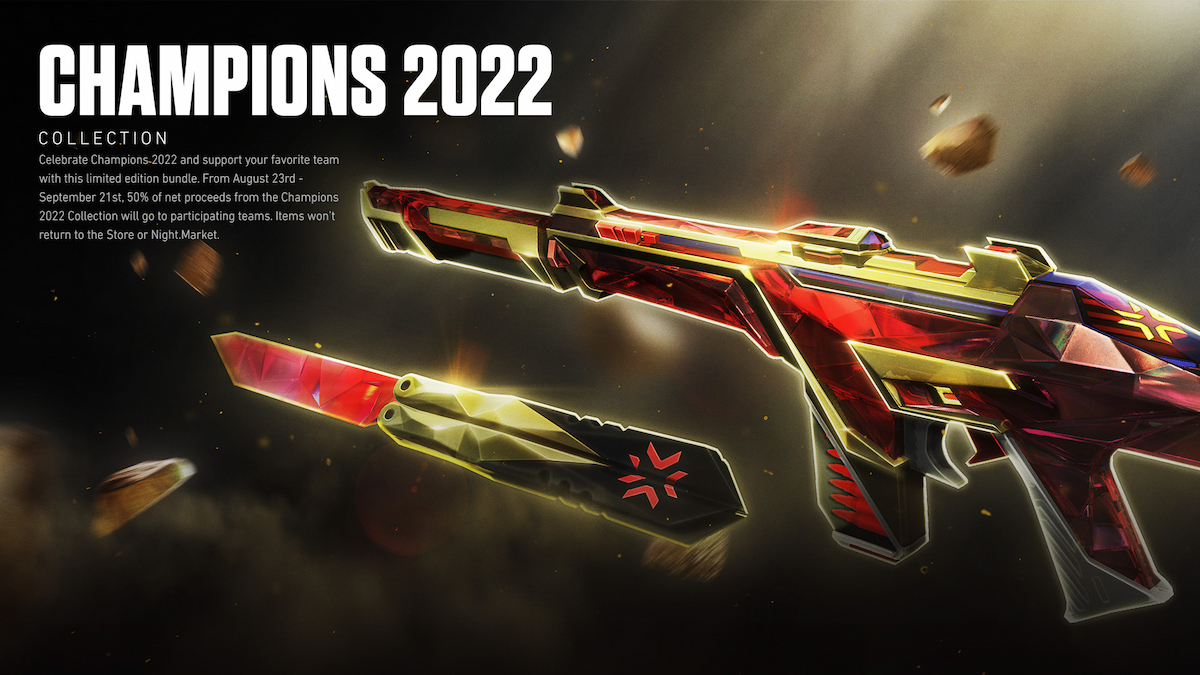 With the Valorant Champions Tour set to culminate in a major tournament kicking off at the end of this month, Riot Games is back again with another themed bundle to mark the occasion. Aptly named the Champions Bundle (as it was last year), this time around it features a Phantom and Knife with a unique design that is punctuated by a kick-ass musical finisher and an evolving visual effect. Once again, 50% of the proceeds earned from the bundle will go to the teams competing at the event.

“When we were designing the Champions 2022 weapons, we wanted to give players a skin with the same feeling as last year: something that was aspirational and bold, that let you flex and show off your skill whether you’re popping off in ranked or dropping 30 on the VCT broadcast.” – Laura Baltzer, Producer

This year’s skin includes a custom model change and two new features as part of the Champion’s Aura: a visual effect that evolves every 5 kills (maxing out at 25 kills), and a special easter egg on the butterfly knife that triggers if you’re top fragging and have at least 25 kills.

“We spent almost a year developing this tech because we felt that it was an important piece in making the Champion’s Aura feel complete this year. We wanted to make the skin feel like it progressed during the course of the game.” – Stefan Jevremovic, Art Lead

Flex more than just your skills with the new #VALORANTChampions collection.
Available starting August 23rd for a limited time, get the Champions Phantom Skin, Butterfly Knife, and more in the store! pic.twitter.com/OGqZH2DvEH

The Valorant Champions bundle will release on Aug. 23 and run through until the start of Champions on Sept 1. 50% of net proceeds from the Champions 2022 Collection will go to participating teams. The Collection is limited edition, which means it won’t return to the Rotating Store or Night Market.

In addition to the bundle, there’s also a free themed event pass coming to Valorant, which features seven levels for players to grind through as they play the game throughout the period. Rewards include sprays, player cards, titles, and Radianite points. The event pass also runs from Aug. 23 to Sept. 21.

It’s also worth noting that there will be Twitch Drops available to those who tune into Champions on Twitch, which can be earned by simply linking your Valorant and Twitch/Youtube account. There are three different drops — a title, spray, and card. Each item will be available during a different week of the tournament: