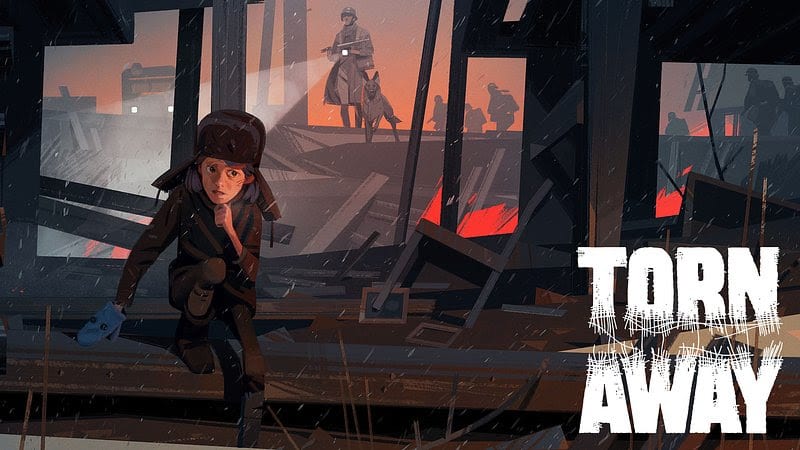 Publisher Nordcurrent and developer perelesoq released the first brief teaser for their debut game, Torn Away, a non-violent indie game about a refugee during World War II. With World War II as its bleak backdrop, the title aims to tell a story about Asaya, a 10-year-old girl who’s been ripped from her home and forced into a Nazi labor camp. Eventually, she’s able to seize an opportunity to escape.

Based on children’s war-time diaries, the game follows Asaya on an eastward journey across Germany and Poland after her escape. Torn Away hopes to present war in a much more tragic light, focusing on the traumatic experiences of war from a child’s perspective, rather than a soldier’s.

This also means that Asaya won’t be able to use violence to survive on her journey. She’s forced to brave the harsh, war-torn countryside as she makes her way home.

Throughout Asaya’s journey, Torn Away will pit her against the elements as frequently as it will test her mettle in other ways. Unable to do harm, the player will have to find new ways to avoid and evade soldiers while finding food and shelter on the way. Perelesoq hopes to tell a story about surviving without, “losing that which makes us human.”

Featuring a unique, painterly art style, a chilling soundtrack, and a bleak premise, Torn Away looks set to tell a unique story with a largely unexplored perspective and theme. It’s the first game from the small, but impressive team at perelesoq, which includes an Oscar-nominated art director, Sergei Ryzhov.

Although they initially teased the game as far back as late 2019, the Moscow-based developer hadn’t launched the game’s Steam page until today. Set to release later this year for PC, you can wishlist Torn Away on its new Steam page right now.