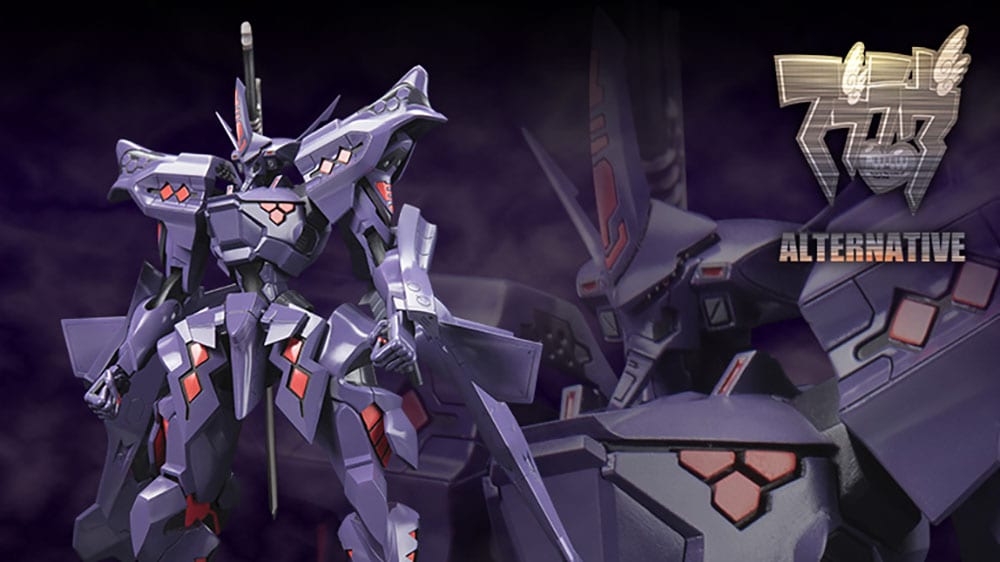 The models, that have gone out of print several years ago, represent Meiya Mitsurugi’s purple Type-00R Takemikazuchi (in its basic 1/144 form and in the deluxe 1.5 version) and the blazing red Type-00F Takemikazuchi 1.5 version piloted by Mana Tsukuyomi.

The models were part of a much larger line of kits that extended to other branches of the Muv-Luv visual novel and anime universe, including Muv-Luv Alternative Total Eclipse and Muv-Luv Unlimited The Day After.

This is likely in preparation of the airing of the upcoming Muv-Luv Alternative anime that will come in October. That will be the crowning jewel of the recent resurgence of the beloved visual novel series, which is considered by many one of the best of all time, if not the best.

“Next up in the hit line of amazing model kits celebrating the giant robots of Muv-Luv Alternative is an upgrade on one of the specific Japanese high-performance Tactical Surface Fighter sub-type, the TAKEMIKADUCHI TYPE-00R VER. 1.5! Specially designed for its battle prowess, the Type-00R version of the third-generation TSF is reserved for the general, also known as “shogun.”

That’s also where it gets its stunning color palette with vivid red and purple, the symbolic color of the Shogunate. The 00R Ver. 1.5 is a powerful combatant with massive angular armor plates, large clawed feet, and of course the distinctive horned head that’s immediately recognizable.

The new version of the Takemikaduchi is comprised of 450 pre-colored pieces so no painting is required. With multiple included weapon options including swords and guns (many of which you can store on its back!) you can arm your new Type-00R as you like, and multiple points of articulation let you pose it in any dynamic battle stance! The elite TSF stands over 7 inches tall and looks great by itself or alongside other Muv Luv plastic model kits and Ani*Statues from Kotobukiya.”

“A special TSF made only for the shogun’s exclusive use, the purple coloring of the body is recreated within the model’s color scheme.

With the eyes and the lit areas being recreated with clear parts, users can recreate a finish that is close to TAKEMIKAZUCHI TYPE-00R by just assembling the model.

Also, the compact scale of this model allows for a fewer number of parts and lower pricing, which makes it easier for beginner plastic model builders to also enjoy this model kit.

Using the popular NON-scale design for each part, best proportions and the dynamic aspect of TAKEMIKAZUCHI TYPE-00R were recreated.

The “Type-74 PB Blade”, “Type-87 Assault Cannon”, and the “Blade Mount” and “Gun Mount” equipped on its shoulders are also included to create a complete model kit.

This model is compatible with the various Flying Bases for users to recreate a variety of dynamic poses.”

“Specifically a Type-00F, this giant robot is the personal unit of pilot Tsukoyomi Mana who used it in several famous battles including the Defense of Yokohama Base. The Takemikaduchi is a powerful TSF with massive angular armor plates, large clawed feet, and, of course, the distinctive horned head that’s immediately recognizable.

Mana’s version features a super bright red color with details in black, purple, and gray that make it stand out from other similar units. With Ver.1.5, this model is recreated with a glossier finish compared to the standard version.

The eyes and the lit areas of the character are recreated with clear parts and all other parts are pre-painted, so you can recreate a finish that is close to TAKEMIKAZUCHI TYPE-00F Tsukuyomi Mana by just assembling the model. With multiple included weapon options including swords and guns as well as waist-mounted thrusters, you can arm and display Mana’s TSF as you like, and multiple points of articulation let you pose it in any dynamic battle stance!”

If you’re interested in the Muv-Luv franchise in general, during recent events we saw the reveal of the official title of Muv-Luv Resonative (which is the continuation of The Day After) and of more artwork from the upcoming Muv-Luv Alternative anime. The new game Project Mikhail is now coming for PC and Nintendo Switch and a new social project named Muv-Luv Verse is also in the works.