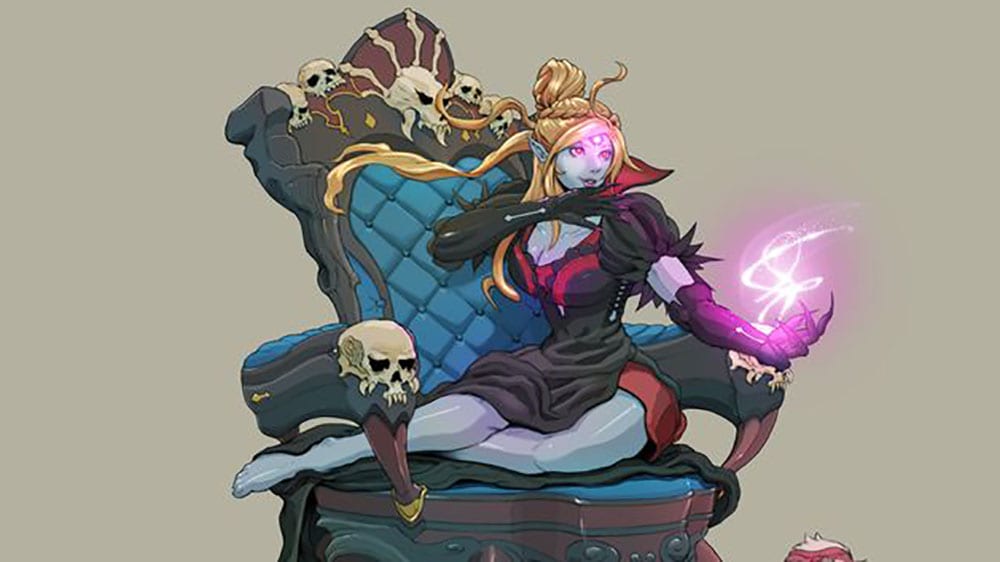 The update introduces new monsters and a new character, on top of providing a message from Suikoden creator Yoshitaka Murayama and his team.

First of all, we get to see two monsters, the Dead Countess (and her castle) and an Evil Spirit, on top of a new playable character named Ivy.

Profession: Engineer from an imperial workshop

Ivy’s two massive “rune arms” are her own invention. They’re powered by rune-lenses and pack exactly the juggernaut punch you’d expect. Her diminutive stature is a bit of a sore spot with her, so the arms are her way of compensating.

“Sorry, did you say ‘shorty’? Oh, you did NOT! All right… We’ll see which of us is puny after I rune-slap your scrawny ass into next week!”

A Demon that deceives people, turns them to undead, and recruits them to her kin. She has a distinct air of beauty and loves to decorate her surroundings.

Castle of the Dead Countess

Once a castle of man, after this abode was abandoned and fell into ruins, Dead Countess and her kin took up residence.

The interior of the castle is crumbling, but it is said that the top floor where the dead countesses are located is furnished with luxurious items in far better shape than the castle’s furnishings, and that the undead hordes raided the surrounding territory to obtain them.

Word has it that the castle floats due to the power of a rune-lens cast by its previous owner.

A spirit-type monster found in ruins and caves. They are said to be what will become of a living thing that dies with an obsession.

Here’s what Murayama-san had to say.

“We are now in the process of fleshing out the details of the game design that were vague before. Right now, a lot of ideas have come from our team members, and my job is to pick and choose what works in the context of the game “Eiyuden Chronicles”.

However, I’m often stumped when I’m faced with ideas that are equally good and difficult to decide on. I often wonder whether I made the right choice or not.

And the biggest job I have at the moment is the foundation of the story, the plot. The plot is not only important to the final outcome of the story, but it’s also a very important part of the framework of an RPG game.

How many dungeons and towns do you need to create based on the plot, and what kind of design will they be?

They will be affected by the plot, so I have to think about those factors as well.

Unlike regular scenarios, game scenarios are closely intertwined with the gameplay.

How long does it take for the player to be able to control the game on their own after the game starts? Things like that also affect the feel of the game.

With this in mind, I have to keep in mind the biggest challenge of a story, which is to portray how people thought and acted, and how these characters lived, otherwise it will lose its appeal.

The biggest difficulty is maintaining a balance between the plot as a stage for portraying the characters’ lives, and the plot as a framework for playing the game.”

We also get a message from the rest of the team:

“While Murayama-san has been handling monthly development updates, we wanted to offer a space in each update for a different key member of the development team to share their thoughts on the progress of the game. For our first Word From the Team, Director Komuta-san!

“We decided to introduce the core members’ messages from this update as well, and I have been appointed as the top batter.

It’s been a couple of months since we finished our Kickstarter campaign. The planning team has been discussing a “war event” for a while now.

“Let’s have a bunch of characters active in the war at the same time.”

“I want to show a big army advancing on the battlefield.”

The members of the planning team and Murayama-san would work together to come up with ideas for the game and establish a direction for it. How are we going to show a lot of characters? What should it look like visually? What kind of game should it be so it’s interesting to play? How should a war in Eiyuden Chronicles be fought? Why not create multiple units with a captain and second-in-command, with a platoon leader-like character among them, and have the player dictate the actions and routes of each unit? I don’t think it’s suitable for Eiyuden users, or users who want to play RPGs, so let’s make it a turn-based type of game. But we don’t want to make it a visual representation of just advancing pieces on a hex!…

It’s exciting to see the “core of the project” of the blurry war event slowly taking shape.

Sometimes, when a planner says dreamy things like, “Personally, I definitely want to make siege warfare with siege weapons and larger weapons a reality!” they get shot down by engineers and designers…… But I love Eiyuden team members for they are very energetic, asking questions like, “how can we make it happen?”, “Maybe it’s better if we do it like this!”, “Let’s make it look like this!”, “It could be more interesting if we used this technology!” Thanks to everyone’s support, the team is in a great spirit as we work on this game.

Right now, the team is in the middle of developing prototypes of battles and towns that have been put into specifications after going through the planning process. We’ve shown you a little bit of the battle scene footage and the battle system in the Kickstarter campaign, but in order to achieve the goal of Eiyuden’s battle with natural formations, using height differences and obstacles, we’ve also been playing with implementing special “gimmicks” in the prototypes. We’re also working on the concept of creating a “living city” through trial and error, including NPC behaviors.

I’ll be teasing you all when it’s ready for presentation.

Thank you for your continued support.”

Incidentally, the Kickstarter survey has been launched, so if you have backed the game, you may want to check your mail to select your platforms and rewards.

Eiyuden Chronicle: Hundred Heroes’ campaign was launched on Kickstarter a few months ago, reaching its basic founding goal in two hours and unlocking console platforms shortly after. It ended at a whopping $4,571 million, making this the third most-funded game on the platform.

For the sake of full disclosure, you should keep in mind that the author of this article is among the backers of the game.