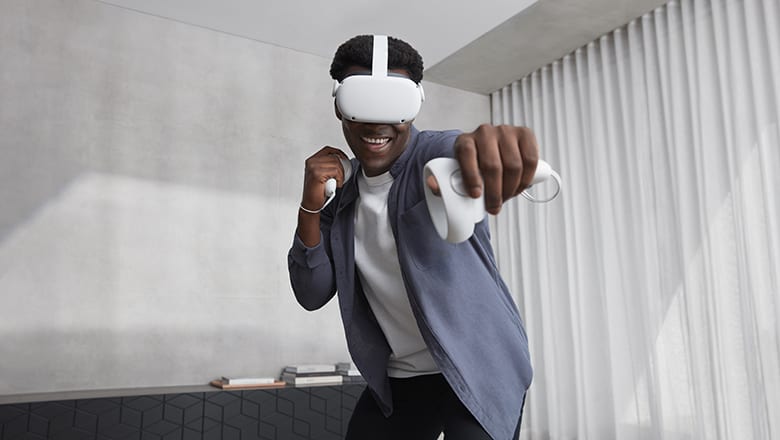 I’m pretty sure it is written somewhere that you can’t write a list of the best games for a VR headset without mentioning Beat Saber. That’s for a good reason, though, as the game is simply one of the best experiences not just in VR but gaming in general. This should easily be your first purchase on the Oculus Quest.

It’s an easy concept to jump into. Swing two lightsabers around to the beat of the music which can quickly amp up on the harder difficulties.

It is an enjoyable time trying to perfect each level, plus it can be a really good workout on the expert difficulty.

I Expect You to Die

If you are a fan of puzzles, I Expect You to Die is your ticket.

Evidenced by the name, the game takes some clear inspiration from James Bond with a satirical twist. You play as a secret agent put into various escape room-like scenarios in which interacting with your environment is the key.

Aside from its puzzle gameplay, I Expect You to Die is also very funny. It pokes fun at some of the most famous Bond-tropes while still making you feel cool throughout the process.

If you’re looking for a very trippy VR experience on your Oculus Quest, look no further than Thumper.

Thumper is a rhythm-based game following a beetle grinding on a rail that has to avoid various obstacles in-sync with the music.

Like many games on this list, it is a simple gameplay concept that has a lot of depth as the levels go on. The surreal visuals help you forget your own reality and make you accept your true calling as a space beetle.

Out of all the games on this list, Real VR Fishing is by far the best-looking one on the Oculus Quest. Fishing has been done in many games, but doing it in VR across some stunning real-world backdrops takes it up a level.

It is a nice one to chill out to and maybe listen to a podcast, which the game makes easy by including an in-game MP3 player and web browser.

A recent update to the game also made it so that fishing with friends in VR is now possible. There are some points subtracted though, since the name isn’t Reel VR Fishing.

Like Beat Saber, Superhot VR is another widely popular title that earns its spot on every VR list. Superhot pits you against enemies which you’ll defeat with your fists, guns, and any other nearby objects. The catch is that time only moves when you move, which adds in a bit of a strategic element.

Superhot VR benefits a lot from being wireless on Oculus Quest by being able to move freely without sacrificing many visuals on the weaker hardware. Punching a red crystal person and catching their gun in midair to shoot two others is simply as awesome as it sounds.

A 3D-platformer may not initially seem like the first thing you’d want to play in VR, but games like Trover Saves the Universe make it clear that they’re extremely viable. While it doesn’t have the top-notch level design of PSVR’s Astro Bot Rescue Mission, it is still an enjoyable one that stands out thanks to Justin Roiland’s brand of comedy.

The game’s visuals are solid, though you will notice a texture or two that don’t look too hot up close. Trover Saves the Universe is still one I recommend picking up, particularly if you are a fan of Rick and Morty.

For team-based multiplayer action, Echo VR can satisfy your need. The game involves two teams attempting to throw a disc into each other’s goals in a zero-gravity environment.

Playing with others in VR is a whole different experience than traditional gaming, with spatial sound and actually seeing their body move in natural ways, making it feel all the more real.

Just moving around in the game is fun but can be a bit disorienting at first because of the zero-gravity. If the Oculus Quest is your first VR headset, I definitely recommend keeping Echo VR for last until you get your VR legs under you. It is free though, so no worries about possibly wasting your money if it does make you sick.

The other trippy VR experience on this list, Tetris Effect, brings a whole new way to experience Tetris’s long-perfected gameplay. The visuals each stage brings truly immerse you into different worlds with an excellent soundtrack to go with them. All the stages take various influences from different parts of Earth’s cultures and geography, highlighting just how cool our planet is.

If you have a Bluetooth-capable controller, then I highly recommend pairing it to your Quest for this one. Playing Tetris on the Touch controllers’ analog sticks is simply not a great substitute for a real d-pad.

The Thrill of the Fight

Rounding out the list is a fun and really great workout experience. The Thrill of the Fight is a boxing sim that is as close to the real thing in games that you can probably get. Unlike other VR boxing games like Creed, Thrill of the Fight doesn’t enforce any stamina bar and fully relies on your actual abilities.

This is another game that takes advantage of the Quest’s lack of wires and the ability to make a large play space (which is required in this game to move around the ring). If you are looking to break a sweat on the Oculus Quest, Thrill of the Fight should be your go-to.

Wrapping up the list is not really a game but still a cool experience for Oculus Quest owners. Bigscreen Beta allows you to watch movies and TV in theaters with other people. You can rent films or check into their official lobbies to watch stuff for free (like a 007 channel which runs Bond movies 24/7).

Because of the Quest 2’s sharper screen, you really feel like you’re in the theater. One of the coolest experiences I’ve had with the Quest so far was watching SpongeBob with complete strangers. As a free app, Bigscreen Beta is an easy recommendation.