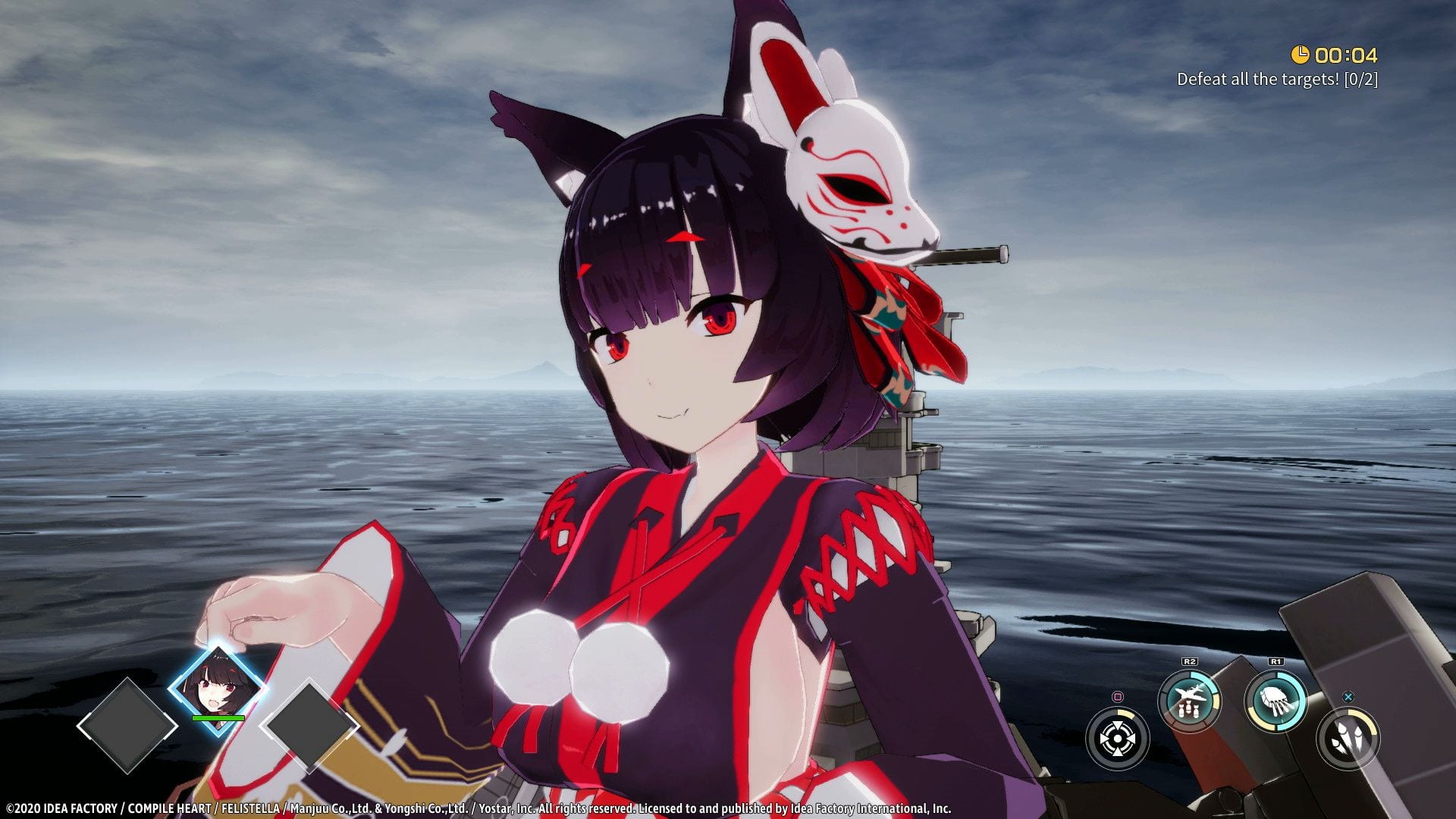 First of all, we get to see a few more options available within the rich gameplay suite, on top of more shipgirls.

To be more precise, we take a look at Yamashiro, Yukikaze, Laffey, Unicorn, Eldridge, and Columbia.

We also get some gameplay details related to the screenshots in today’s batch.

Learn more about your favorite Kansen in Episode Mode: Knowing is half the battle, and with Episode Mode, Commanders can get to know more of their favorite Kansen through special dialogue scenes! Because Azur Lane: Crosswave takes place in an alternative universe, fans of Azur Lane mobile can experience special events and dialogue between characters that never spoke to one another in the mobile version. Watch unexpected friendships to bloom!

When scouting a new Kansen, Commanders will also notice special bonus buffs known as “Fleet Effects.” Depending on a Commander’s fleet, additional buffs that strengthen the party are added!

Shop ’til You Drop: Upgrades are necessary as you progress through the game and with Shiranui’s Shop and Akashi’s Research Lab, Commanders will find helpful items to strengthen their fleet. Keep an eye out for a “Good find” notification on the shop game menu. When the notification pops up, head to Akashi’s Research Lab and grab these “Good find” items for a limited time. As soon as you head to a game mode, the “Good find” item will disappear, so be sure to have enough Coins to purchase these items.

On top of that, we learn about the shipgirls:

A shrine maiden associated with the Sakura Empire. Maybe it has something to do with her association with the naval vessel of her namesake, but she seems to constantly bring bad luck with her. Despite that, she is very skilled with being able to purge evil and in handling various rituals. The bad luck and failures she brings is overwhelmed by her bright personality, which helps her get along with her fellow peers. But one day, a certain trial befalls her: she is separated from her older sister, and is partnered with Kongou instead to attend the Joint Military Exercise. With many new challenges to face, Yamashiro’s adventure has just begun.

Those in the Sakura Empire refer to her as Yukikaze of the Kure City. She’s often found bragging about how lucky she is, but most people let her say what she wants since she’s proven herself to be powerful. Despite being childish, she does give praise where it’s due and has learned to respect Shimakaze and Suruga as their senior. By happenstance, she partners with Ayanami during the Joint Military Exercise. She tries her very best in proving herself better than a certain someone who she rivals.

Royal Navy girl who always seems to be cuddling a mysterious plushie she calls “Ugean.” She doesn’t speak much, but admires the graceful maturity that Illustrious possesses. The efforts she displays brings courage to her allies, all of whom rely upon her. Suruga helped her when she lost her passport, so Unicorn tries her very best to repay Suruga as much as possible.

A member of Eagle Union. She speaks in a lethargic fashion, and is often found with a sleepy expression on her face. Most of the time, she’s quiet like some small animal, but she has a very strong will, and will not let anyone get away with bringing harm to her friends. Her battle prowess is also quite impressive, and this led to the invitation for her to attend the Joint Military Exercise. She decides to participate, although reluctantly.

Eldridge seems to possess various powers (?), possibly due to her vessel’s historical background. She can emit electricity, make things float, and even teleport, but unfortunately… none of her powers are useful in battle (or so it seems…). For some peculiar reason, Eldridge ends up joining the Joint Military Exercise, which surprised her guardians.

One of Cleveland’s younger sisters, and one of the very few who understands and supports her. She approaches Cleveland like she is her friend, and seems to have the knack of knowing her well enough to either lift her spirits or knock them down. She’s very strong, loves being en vogue, and displays qualities that can potentially exceed Cleveland. She’s participating in the Joint Military Exercise to offer support to Cleveland and everyone there.

If you want to learn more about Azur Lane: Crosswave, you should definitely read the interview we pubished a few weeks ago, in which Compile Heart President Norihisa Kochiwa talks in depth about the project. You can also check out more shipgirls revealed a few days ago,  a second batch, a third one, a fourth, a fifth, and a sixth.