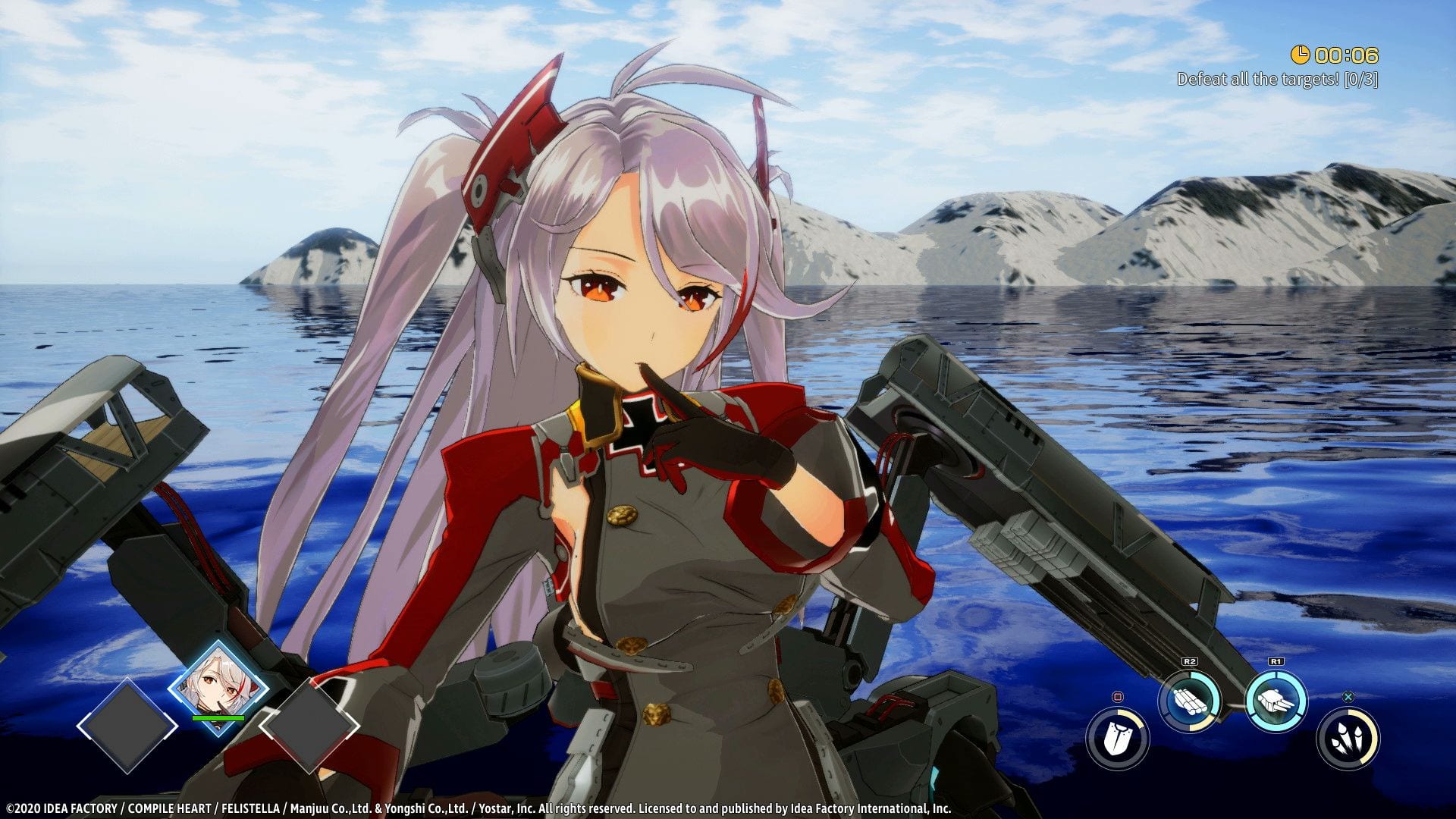 First and foremost, we learn about the four modes that you can enjoy in the game.

Those are Story Mode, Extreme Battle Mode, Photo Mode, and Episode Mode. On top of those, we also get to see six more shipgirls including some fan-favorites, Hood, Prinz Eugen, Belfast, Portland, Victorious, and Vestal.

You can catch all the screenshots below, keeping in mind that Victorious and Vestal are support ships, so they don’t have their own 3D models in game and cannot be controlled directly.

Below you can find an explanation of each mode:

A New Adventure:
Amateur and veteran Commanders can now experience a unique through the lens of 2 newcomers, Shimakaze and Suruga. Experience the Azur Lane: Crosswave universe with the Prologue and 7 chapters fully voiced in Japanese.

Replay System:
Commanders can replay any stages they’ve cleared at no cost. By replaying previous stages, Commanders can grind for more experience, gather A Points – a type of currency that can be used to scout ships, and even collect character-specific items.

Sub Events:
Commanders will notice Sub Events that will pop up when they’re on the Ocean Map. Characters other than Shimakaze and Suruga will make an appearance in these sub events and provide additional background on what is happening during the Joint Military Exercise. A sub event may even unlock a special CG…

Gather A Points and Scout More Characters:
After every victory, Commanders will gather A Points – a currency that can be used to purchase unlocked ships. Some ships may require a lot of A Points, so use it wisely.

Meet Shiranui and Akashi to Purchase and Upgrade Equipment:
There are 2 shops Commanders can visit: Shiranui’s Shop and Akashi’s Laboratory. You can buy and sell equipment at Shiranui’s Shop that can be useful for your next battle.

Akashi’s Laboratory can help Commanders create new equipment with the use of blueprints, convert special materials into equipment, and exchange rewards. Some equipment require certain blueprints and/or Coins to create, so Commanders may need to grind to grab the necessary blueprints and Coins needed.

Challenge over 100 Teams in Extreme Battle Mode:
For Commanders who seek for a challenge, this mode is for you. Special opponents also may appear during Extreme Battle Mode depending on specific criteria cleared, so take extra precaution and prepare your fleet!

Pose your favorite Azur Lane characters:
Ever wanted to be a professional photographer? With Photo Mode, Commanders can select from a handful of stages, pick their 3 favorite characters, pose each ship and change their expressions, and photograph a picturesque moment!

Find more about your favorite Azur Lane characters in Episode Mode:
With 50+ sub stories in Episode Mode, Commanders can get a better sense of character personalities, quips, and hijinks! Some character-specific episodes can only be unlocked when all the related characters join the Commander’s fleet. For example, Commanders will be able to see a particular event where Ayanami, Laffey, Javelin, and Z23 all appear only when they are all part of your fleet.

Next, we learn about each shipgirl:

A graceful noble who holds a very high rank among those in Royal Navy. Not only is she refined, but she is also skilled both with the pen and sword, and is the admiration of all who seek to become a Royal Lady. She is one of the very few who can voice her opinion to Queen Elizabeth, and acts in full support of her administration.

She is partaking in the Joint Military Exercise as a representative of Queen Elizabeth. Despite being someone of a lofty position, she is quite approachable and charming. The question is who she will show her charming side to during the event…

An Iron Blood elite who knows her way around the advanced technology that her nation has researched. Her aura is seen as mature and alluring. Outside of missions, she is very free willed, making it hard to predict what she may be thinking in any moment.

As soon as she engages in battle, however, she annihilates without mercy. It’s hard to know why she thinks the way she does. Her older sister, Admiral Hipper, is always on her case. She joins the Joint Military Exercise to oversee Z23 and to ensure that their place in the world will not be marred by whatever is to come.

Belfast is as intelligent as she is a perfectionist. As housekeeper of the Royal Navy’s maids, she is known to many. She knows exactly how to approach others; she treats her superiors with dignity, she treats her friends openly, and she treats her enemies with respect.

The skills she exhibits in battle come from a wide study of various subjects which have taught her how to do her very best in battle. Her daily life is meant to serve the Royal Navy with the grace it deserves. It seems as if she’s in charge of security at the Joint Military Exercise, but…

An Eagle Union member who brags about her younger sister. The love she displays can be too much, which makes others uncomfortable. She began to feel depressed when she was selected to join the Joint Military Exercise before her younger sister, but her positive nature allowed her to quickly brush away the creeping sadness.

As she prepares for the event, one can find in her mouth the latest copy of a “special” kind of magazine dedicated to her dear younger sister…

The second-in-command, Illustrious-class aircraft carrier. She loves all things beautiful and, above all, achieving victory. Unlike her older sister, Illustrious, she is quite bold and daring (with a touch of narcissism). She seriously believes that brute force is the fastest solution to everything, which causes a bit of a stir, even among her friends.

She sees Illustrious as a rival who got in to the Joint Military Exercise ahead of her, and decided to join as support instead.

Eagle Union’s ace and Enterprise’s friend. She’s very gentle, calm, and very capable as a repair ship. She has supported the Eagle Union and their members, including Enterprise, in times of need.

She was summoned by Enterprise to participate in the Joint Military Exercise as support and to help oversee the event.

If you want to learn more about Azur Lane: Crosswave, you should definitely read the interview we pubished a few weeks ago, in which Compile Heart President Norihisa Kochiwa talks in depth about the project. You can also check out more shipgirls revealed a few days ago,  a second batch, a third one, a fourth, and a fifth.