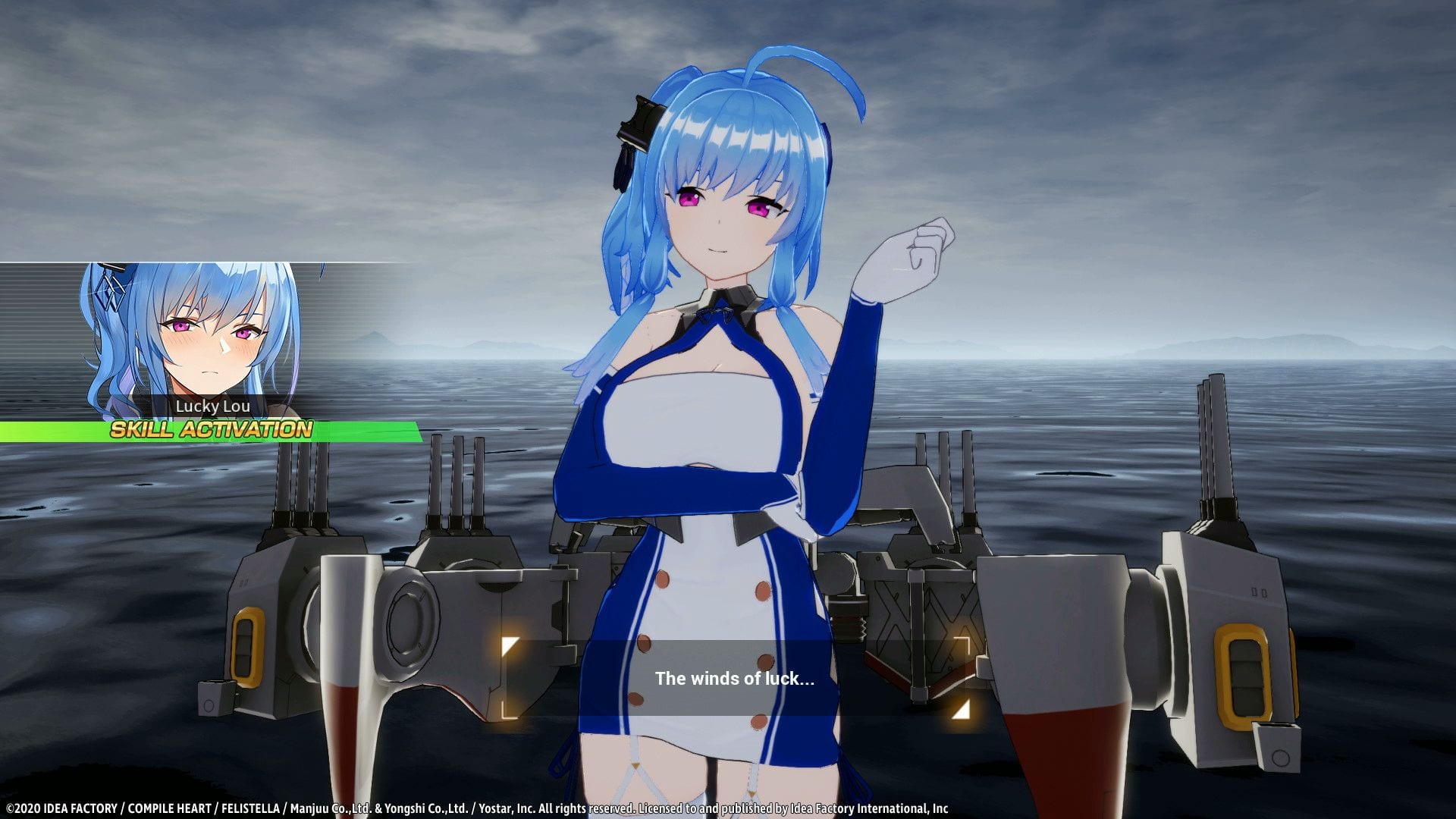 You can check them, all out below. You should keep in mind that Abukuma, Amazon, and Arizona are available exclusively as support and secretaries, which is why they have no 3D gameplay images.

On top of the screenshots we also get lots of gameplay details about several features.

Azur Lane: Crosswave allows Commanders to choose a Secretary Ship that talks and greets you right from the start! By setting your Secretary Ship, you can increase their affection. Once the ship’s affection reaches the “Love” status, Commanders then have the opportunity to marry their favorite character!

The Story Mode contains an original story following the journey of two new Sakura Empire recruits, Shimakaze and Suruga. The story begins with all four Nations living harmoniously. Suddenly, a Joint Military Exercise was enacted causing all the Nations to train even harder than before. But all of the Nations began to question… how did this event come to be?

Players will travel on an Ocean Map, which changes each chapter, and can encounter various events, battles, and also items. Players will engage in 3 VS 3 battles and also experience conversation events that can be reviewed in the Gallery.

Through the 3 VS 3 battles, players can accumulate A Points which they can use to scout allies to create even more fleets!

Players can challenge themselves in Extreme Battle Mode as their fleets become stronger. The difficulty of the stages increase as players progress. Here players can fight powerful enemies and collect rare items. Some of these items can lead to very special events…

Can you build a fleet strong enough to clear the highest level stages?

A mode where you can take pictures of your favorite characters! You can place up to 3 characters on an open stage and have them pose as you’d like.Snap a pic and share it with the world!
Episode Mode

Players can view hidden events that are unlocked through clearing certain criteria. Through these events, discover a new side to the 66 characters that appear in the game!

Each character also belongs to one of the four Nations participating in the Joint Military Exercise: Sakura Empire, Eagle Union, Royal Navy, and Iron Blood. Learn more about the four Nations below!

Sakura Empire: An island nation in the east which abides by its culture of honor and tradition.

Eagle Union: The democratic federation which values the principles of freedom and harmony.

Royal Navy: The constitutional monarchy which prides itself in its glorious history of nobility.

Iron Blood: The military empire which strives for phenomenal advancements in technology.

We then get some more details about the shipgirls showcased today.

A young Royal Navy girl who has reached the pinnacle of both cuteness and slyness. Her happy-go-lucky attitude masks her clever nature very well. She becomes friends with almost anyone due to her bright smile and kind nature. She’s secretly in charge of demonstrations in preparation for the Joint Military Exercise.

A member of the Iron Blood whose nickname is “Zed.” She’s always looking for ways to improve herself, and she’s also passionate about research. She’s very critical of herself and others, but will always give praise to those who she deems as worthy. She’s often found acting as a commander in battle. She was chosen to represent the Iron Blood in the Joint Military Exercise by her peers. She’s doing her very best to rise to the occasion and lead her friends to victory.

Eagle Union’s Light Cruiser nicknamed “Lucky Lou.” She speaks with conviction, which comes from the power she holds, and her mature aura gathers the attention of even her peers. She is the older sister to Helena, and though they seem like two opposites, they both know how to approach others with kindness, which reminds everyone of their sisterly bond. Among the many that Eagle Union sent to the event, she is one of the few who actively supports her friends.

She looks like a demon, but acts a lot calmer than she looks. In fact, she’s so calm that it almost feels like she’s already seen everything life has to offer. This, coupled with her general personality, attracts many to her. When she has time, she is usually found munching on torpedo tempura her older sister Nagara made or simply passes the time fishing and playing Japanese chess. She decides to participate in the Joint Military Exercise event so long as she would only be in charge of support.

Perhaps it’s because she has the vessel history of being a flotilla leader, but in any case, Amazon acts like a veteran, and has a wanton need to lead others as Royal Navy’s young instructor. She lacks height, and is often mistaken for being younger than she is, which riles her up quite easily. On the other hand, she has the humility to apologize when she is in the wrong, and has the capacity to accept apologies too. She joins the Joint Military Exercise to offer support, and to keep watch over the participants.

Maybe it’s because of her vessel’s history, but she is very sensitive and has a general aura of sorrow surrounding her. She has a tendency of talking too long, but she is very brave on the battlefield, and has what it takes to be a Kansen. She believes that being proactive will make her better, so she decides to join the Joint Military Exercise as support.

If you want to learn more, you should definitely read the interview we pubished a few weeks ago, in which Compile Heart President Norihisa Kochiwa talks in depth about the project. You can also check out more shipgirls revealed a few days ago,  a second batch, and a third one.