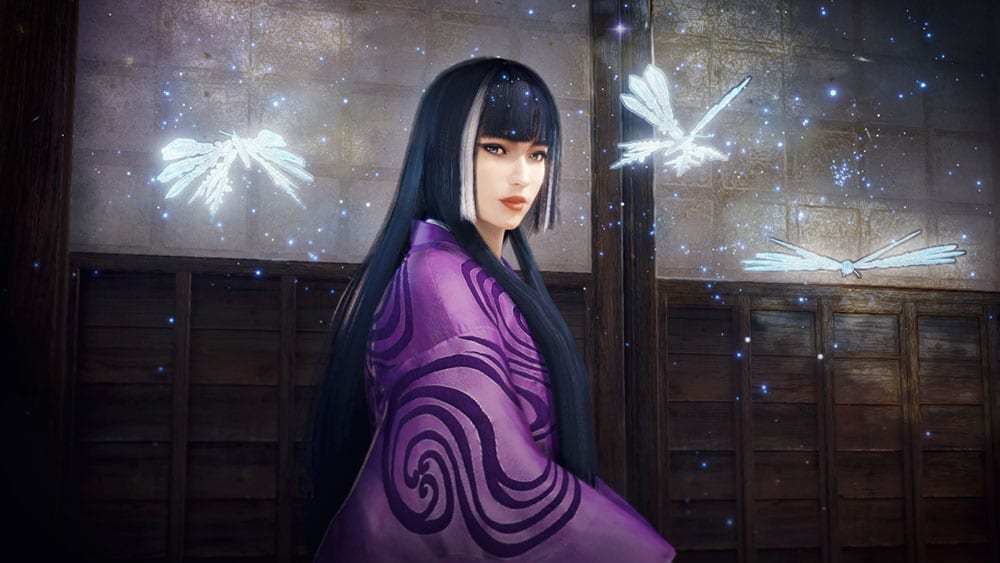 The trailers also include clips of cutscenes from the game.

On top of that, we take a look at a new character and a returning one.

Imagawa Yoshimoto is a daimyo known as the best archer of Tokaido. His existence is a huge wall between Oda Nobunaga and his dream of unifying Japan.

Nouhime is the waif of Oda Nobunaga and she is a woman of dignified beauty and grace. At times she seems cold, but she loves her husband dearly.

It’s saie that the ice butterflies embodying her guardian spirit Usura-hicho; have a deep connection with the souls od the dead.

Incidentally, in this game the hero can acquire the guardian spirits of defeated enemies.

Usura-hicho attacks all enemies within range with water elemental damage. On the other hand, Imagawa Yoshimoto’s Rokugezou can unleash lightning over a wide area.

Enenra is a demon dwelling in ordinary smoke, born of the feeling of resentment of those who have been swallowed by darkness. It’s said that people are attacked by steam and smoke rising from baths and ovens.

Waira is a mysterious youkai with a huge body and a single talon attached to its arms. It’s portrayed in scrolls but its lower body is never showcased and the whole picture is unclear. It’s said that it ambushes humans to eat them.

Ippondatara is a youkai with only one leg. It’s said to have been a blacksmith who had his legs and eyes damaged due to the harsh labor conditions and then became a demon. While it carries weapons, his strong leg is especially dangerous.

Last, but not least, we get to see two levels. The town of Tatara used to be a lively blacksmithing village, but its prosperity is gone and it’s now in disrepair.

It’s said that only a few blacksmiths can enter the tower in the middle of the village.

Okehazama is a valley surrounded by steep mountains near the western border of Owari. Often used as a place for armies to rest, its inhabitants are long gone. At times outlaws and deserters come here to hide from their pursuers, and they’re never seen again. The wind blowing in the valley sounds like someone is whispering.

Incidentally, Okehazama is the location of the historic battlefield where Oda Nobunaga defeated Imagawa Yoshimoto.

NiOh 2 will release for PS4 in early 2020. If you want to see more, you can enjoy the previous trailer, the latest multiplayer gameplay, another set of videos, the latest batch of screenshots, and plenty more images from the day before.