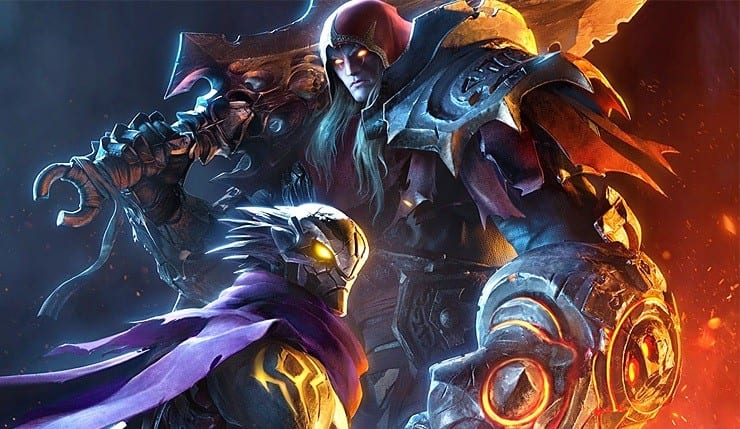 THQ Nordic and Airship Syndicate revealed a new Darksiders Genesis trailer today for the second playable character War, showing off both his introduction and gameplay.

If you missed our initial coverage of the game, it takes place with the fourth horseman Strife and his brother War diving into hell to face off against Lucifer.

Unlike other Darksiders titles, Genesis can be played single-player or in co-op, as players can opt to play as either Strife or War.

Taking cues from Diablo with both combat and exploration, Genesis has similar top-down combat where players can expect to collect items, upgrade skills, abilities and enhance weapons through destruction they will pave through hell.

Strife dual wields handguns which leads to some faster paced combat unlike the other horsemen that used melee weapons (War, Death, and Fury) in the other games from the series. War still wields his massive sword Chaoseater, and as seen in the trailer can ride his phantom steed Ruin to dispatch enemies from horseback.

Earlier this year we covered the announcement for preorders of the Nephilim and collector’s editions of the game, but you’ll have to act fast for the Nephilim edition, with only 5,000 units are being released worldwide.

The Nephilim edition includes a Strife figurine, steelbook, artbook, soundtrack, stickers, and a limited release of the official board game Darksiders: The Forbidden Land.

Taking place in hell, Genesis will have players fighting angels, demons and anything else hell has in store for them. THQ Darksiders Genesis is releasing in late 2019 for Xbox One, PlayStation 4, Nintendo Switch, PC, and Google Stadia.

10 Video Games That Dragged on for Way Too Long

10 Video Games That Dragged on for Way Too Long