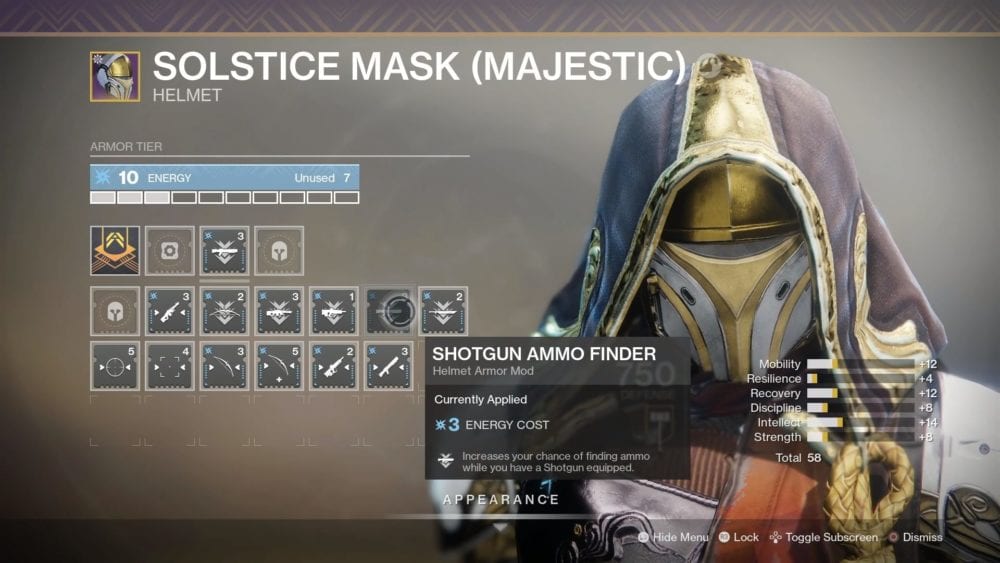 Finally after years of requesting it, and months of anticipation, Destiny 2 fans finally got a clear look at how transmog will work when it is released alongside the Shadowkeep expansion later on Oct. 1.

The armor 2.0 stream was structured around giving three developers a chance to customize each of the three classes. They created builds around their preferred playstyle to show off how much more agency players will have in creating an armor set that works for them, and how much experimenting they can do now.

Before diving into that though, it’s worth noting some of the new things that are being added, and re-added into Destiny 2 with the armor 2.0 update.

Destiny 1 stats: Intellect, Discipline and Strength are all returning with armor 2.0 and will function the same way they did in Destiny 1, reducing the cooldown of your super, grenade, and melee attacks respectively. Initial stat rolls will be randomized with each armor piece that drops, preserving some of the function of looking for your own “god roll.”

All stats old and new will now scale up to 100 instead of 10, and every 10 points will unlock a new tier of bonuses and will be listed on armor 2.0 gear which will drop from all legendary engrams once Shadowkeep launches.

You can examine any armor and play around with any mod combinations that you have obtained at least once. You don’t need to obtain multiple mods anymore, you can just slot, remove, and experiment to your heart’s content once you have found/purchased a mod at least once on as many armor pieces that you want. All pre 2.0 mods are carrying over in addition new mods such as Boss Resist.

Mods in Shadowkeep will be obtainable through the Gunsmith either directly purchased via Mod Components, or discoverable through engram rewards from him. Some will also be discoverable from out in the world and activities such as raids as well.

There’s a budget for mods though. As you masterwork a piece of armor you gain more currency towards your mod budget. So you only have room for five points worth mods at five masterwork, and that will increase to ten as you masterwork your gear more. Fully masterworking gear will give you +2 to all stats as an added bonus.

There are also new items in addition to Enhancement Cores that you’ll need to fully masterwork new 2.0 armor such as Ascendant Shards and Enhancement Prisms.

Here’s an example of what we mean. The Paragon mod costs four energy, while a void resistance mod only costs one. Three different socket types will house different types of mods.

There’s also some tweaks to some mods as well. For example, ammo dropped via the Ammo Finder perk will actually have a different look to them now so you can see how well it’s working.

Transmog like we mentioned is finally a thing. It is limited to universal ornament items which include Eververse gear and gear from seasonal events such as The Dawning.

These items can be swapped onto any armor you own to change the look of them for as long as you like. A quick note: glow from Solstice Armor will carry over as well.

Finally, throughout the stream the presenters also dropped some other tidbits of news not directly related to armor 2.0.

The glimmer cap was bumped as one character had 250,000 glimmer. Also (unsurprisingly) power level will be higher. And instead of showing the level of a player by their name, it will show what class they are (Hunter, Titan, Warlock).

There was also something about gear bonuses that related to your power level, but that was left unexplained.

However most excitingly though is the buff of several under performing skill tree paths for certain subclass.

The most exciting is the return of Weapons of Light to the Ward of Dawn subclass which will be music to the ears of Destiny 1 Defenders. Bottom path Nightstalker also has received a buff as well. Its melee and grenade abilities will now feed into each other giving you frequent access to both. Great for those that enjoy using the Smoke Grenade often.

It was a long stream, we’ll try and go back over it another time to find any other little details we missed but that’s the long and short of it. You can take a look at some of the new UI below.

More info about some of the things left unsaid today will be coming tomorrow and on Monday we learned more about Cross Save, so exciting times ahead for Destiny 2 fans indeed.

All images via Bungie.