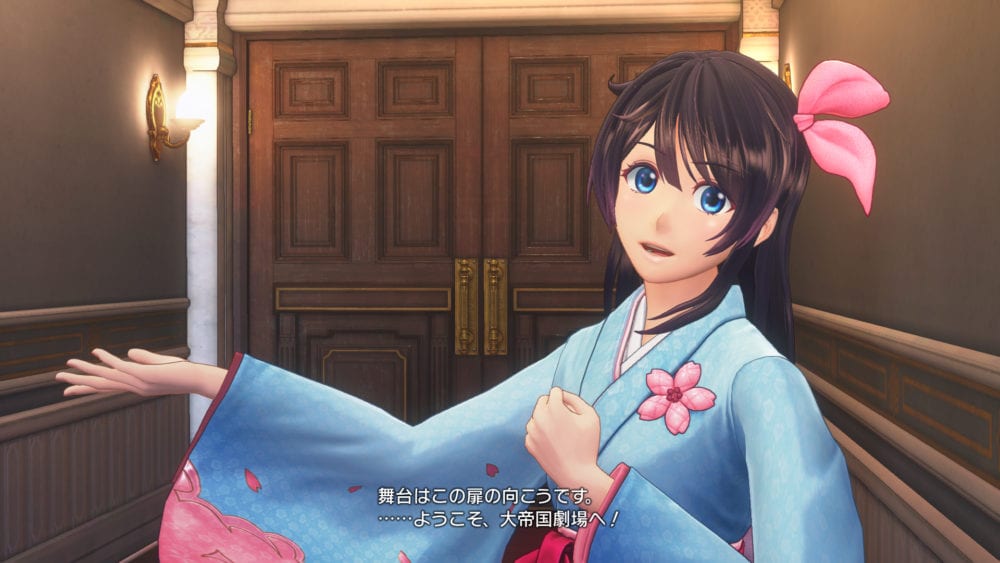 First of all, we take a look at the first episode of the story, titled “A New Wind.”

In the 29th year of the Taisho era, hero Seijuro Kamiyama arrives in the Ginza district of the capital city of the Empire, Tokyo.

He had been on a special mission at sea after graduating from the Naval Academy with excellent results, but his new orders confine him on land, stationed at the Great Imperial Theater. Once arrived, he meets his childhood friend “Sakura-chan” (heroine Sakura Amamiya) who he hadn’t met for ten years.

She greatly admires former heroine Sakura Shinguji, and she enlisted in the Floral Revue following her dreams.

Our hero then meets Sumire Kanzaki, former star of the Floral Revue, who tells him that the theater is the base of the new Revue and that his new mission is to be its commander. He is impressed by Sumire, but he also learns that, unfortunately, the Revue is short on budget and human resources. The mission is going to be challenging.

As he meets other members like Hatsuho Shinonome and Clarice, he realizes that the facilities are riddled with issues, performance is bad, the Koubu are poorly maintained and outdated, and his own last-generation Koubu isn’t available yet. He doubts whether he can really help rebuild the Floral Revue, as the situation seems hopeless.

On top of that, the Imperial Army threatens to disband the Floral Revue if results aren’t produced. While Seijuro and the others are inclined to give up, Sakura keeps spurring them to hold on.

During such dire times, a large number of enemies attacks the Imperial Capital, which had not seen such a threat in ten years. While the Floral Revue manages to intercept them in their Koubu, the area is engulfed in the “magic space” created by someone’s intense spiritual power.

Despite being in a desperate situation, the Floral Revue manages to dispel the magic space. Despite the victory, the sudden return of the enemy demons after ten years of peace has Sumire greatly concerned.

We then move on to gameplay, and we see how the player can progress the story by exploring the map and triggering events marked with exclamation marks. It’s also possible to find sub-events and items that can be examined.

Shining spots mark bromides that can be collected, and the action required to advance the story is showcased in a box on the top-right of the screen. There are also limited-time events that need to be cleared before time (indicated by a gauge at the top of the screen) runs out.

Last, but not least, we take another look at the locations of the Imperial Theater, including the main lobby, the theater itself, the courtyard which houses a large spirit crystal, Sumire’s office, the hero’s room, the baths in the basement, and the underground bay.

If you’d like to learn more about Project Sakura Wars, you can enjoy the original reveal, a lot of additional information directly from the developers, and more comments from Sega CEO Haruki Satomi. You can also check out the latest screenshots, the previous screenshots including the first glimpse of gameplay, and the latest extensive gameplay reveal.