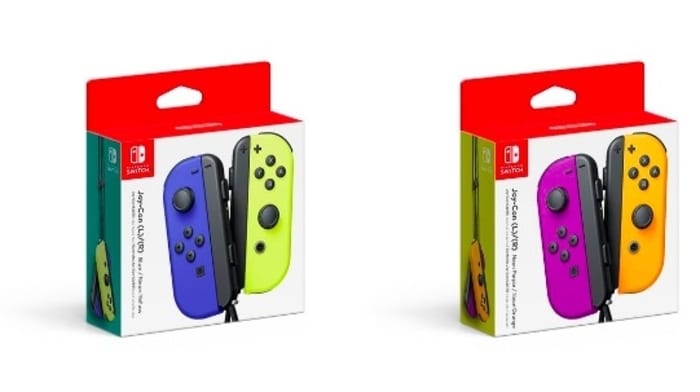 Tired of using the standard red, black and blue Joy-Cons for your Nintendo Switch? Are Cosmo and Wanda (pink and green Joy-Cons) no longer slick enough for you? Are your friends complaining there aren’t enough Joy-Cons for everyone to gang up on each other in Super Smash Bros. Ultimate?

Whatever the case may be, Nintendo has announced two new pairs of Joy-Con controllers painted in four more wacky colors. One pair comes in Blue and Neon Yellow, while the other pair is painted in Neon Orange and Neon Purple.

These color Joy-Cons will be released on Oct 4, just two weeks after the Nintendo Switch Lite, which already comes in three limited colors.

Since the Switch Lite doesn’t carry Joy-Cons and built-in motion controls, it wouldn’t be a bad idea to buy either combination of the new Joy-Cons to accompany it to make certain games playable, should you plan on buying the new console.

Just like other Joy-Con combinations, the new pairs will cost $79.99 at launch.

For more on the Switch, check out our review on Mario Maker 2, an opinion on the Switch Lite’s lack of “Switching,” and fast facts you should know about the upcoming handheld-only console.