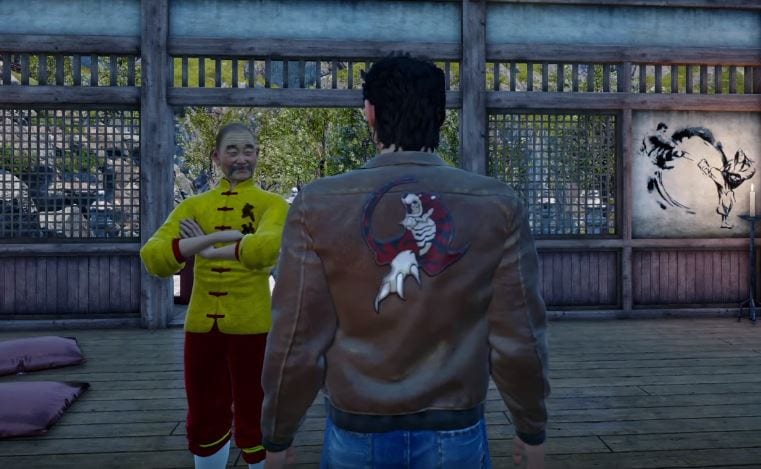 Shenmue III finally gets some gameplay footage today thanks to IGN Japan who released the video of Ryo doing training exercises and sparring with another student.

Many fans of the game and people who backed the Kickstarter project have been a bit worried about the status of the game as all we’ve seen thus far are cinematic trailers with little to no gameplay.

In the first video seen below, we see Ryo doing training exercises such as poses like the “Horse Stance” and practicing the “One-Inch Punch” technique. These mini-games appear to be focused on keeping these imaginary bars level, most likely done by using analog sticks to balance Ryo.

Doing these exercises will boost Ryo’s skills such as his Attack Power, Endurance, and even another level up bar labeled “Kung Fu.”

After this segment, Ryo is in the dojo as he interacts with one of his fighting instructors. While interacting with this teacher, Ryo can ask for advice, spar, fight, or leave.

In this scenario, the player chooses to fight and the mentor tells Ryo that Red Tiger (who is 1st Duan rank) is a good match for his skills.

We then finally get to see some footage of the melee combat in Shenmue III. Here we can see Ryo practice moves such as the Tornado Kick, Elbow Assault, and the Counter Elbow Assault.

The combat looks pretty fluid so far and players can expect a combat system that gets deeper as you play and continue to hit the dojo to rank up. It’s just nice to actually see some real-time footage of the game, but I personally can’t wait to see how some of the larger scale battles will play out in the future.

Starting in the second video, we see kids practicing tai chi in a village as Ryo peacefully watches on. We then see Ryo making some purchases at a local shop and then he offers to help the shop owner split some wood.

Shortly after we see Ryo engaged in a mini-game chopping some wood for the shop keeper.

In the third and final video, we can see Ryo engaging with game vendors. He then proceeds to the play the famous mini-game from the original Shenmue titles called “Lucky Hit” which is kind of like the game Plinko from the television game show The Price Is Right.

After this Ryo moves on to another vendor who offers him to play a mini-game of Turtle Racing in which he bets on which turtle he thinks will win the race. The player still can interact here by pressing various button prompts during the race.

Ryo wins the bet on the turtle race and then proceeds to encounter a man who offers him for a game of “Roll it on Top” in which Ryo places a bet on what numbers he will get on a couple of dice rolls.

In order to play the various mini-games shown in the third video, Ryo must purchase tokens using in-game money which he proceeds to do in order to play another round of games.

At the end of the mini-games video, Ryo encounters a vending machine with various fishing lures. He proceeds to purchase a few and then the video ends.

For more about Shenmue III feel free to check out our latest coverage on the E3 trailer shown during the PC Gamer conference, our look at the PC only Collector’s Edition for the game, a look at some of the previous screenshots released, and click here for some other released details about the mini-games, combat, and economy.

Shenmue III was originally supposed to release on Aug. 27 of this year but has since been delayed to Nov. 19 of 2019.

Please check out the three new gameplay videos (courtesy of IGN Japan) of the game down below: