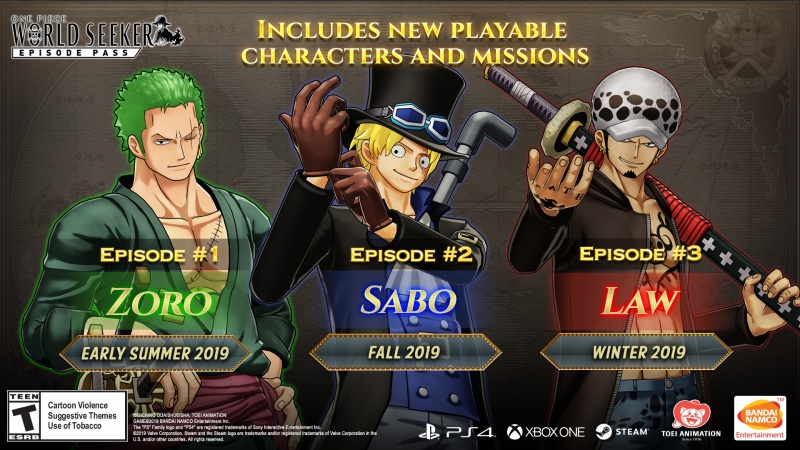 Both DLC will focus on a new playable character. The second will feature Sabo and will release in the fall.

The third will focus on Law and will launch in the winter.

We also get more information on the first DLC that will launch this summer, featuring Zoro and titled The Void Mirror Prototype.

“After sneaking into a robotics factory, Zoro finds KAGERO, a self-learning experimental weapon that can mimic opponents’ attacks. After discovering this dangerous weapon, it escapes and begins to wreak havoc on the citizens of Prison Island.

Zoro’s expertise with his blades give him unique abilities including dealing more damage to locked-on opponents when using the “Relentless” ability.

Zoro also has an air-dash ability allowing him to move through the air. Additionally, true to Zoro’s personality in the ONE PIECE series, parts of the map and mini-map will be blurred out due to his poor sense of direction.”

If you’d like to see more of the upcoming first DLC, you can check out a trailer released a while ago and recent screenshots showing the first DLC.

If you want to learn more of One Piece: World Seeker, you can read our review, in which our own Keenan was quite enthusiastic about the game. If already you grabbed the game, you can also take a look at our wiki full of guides to help you out.