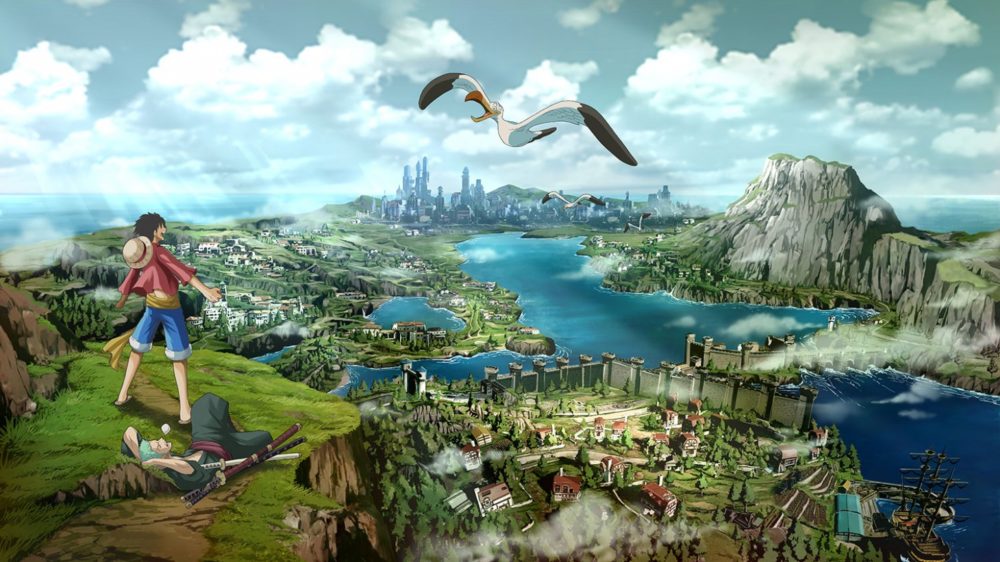 One Piece: World Seeker on PlayStation 4

Every once in a while, an anime game comes out that does right by its source material. One Piece: World Seeker is one such game, delivering engaging gameplay and a solid story that make up for almost all of its weaker design elements.

The title sees Luffy and the Straw Hat crew drawn to Prison Island by rumors of an invaluable treasure hidden within its namesake naval facility. Though they succeed in breaking in, Luffy is captured by the warden Isaac and thrown into the ocean.

He nearly drowns before being saved by Jeanne, the leader of the island’s original inhabitants and a peacekeeper between the island’s warring pro- and anti-navy factions.

In search of the cause between the tensions bubbling across the island, she hopes to speak with Isaac and broker a peaceful ceasefire. Eager to repay her and get even for his earlier defeat, Luffy agrees to help, setting off to aid her toward her goal.

It’s pretty by the books in terms of a One Piece narrative, but its original setting, characters, and presentation help it stand shoulder to shoulder with the anime and its feature films.

The introductory cuts of the Straw Hat crew conducting a heist, along with emotional exchanges between Jeanne and Isaac, establish a tone and mood that are right up there with those offered in fan-favorite films like Strong World or Film Z.

Likewise, Jeanne and Isaac feel right at home alongside mainstay One Piece characters.

Whether they’re interacting with the Straw Hats, butting heads with Navy Admirals or pulling the strings toward their own ambitions, they blend almost seamlessly into the world and lore, making it all the easier to lose yourself in the narrative.

This is made all the better by the game’s graphics. Jaw-droppingly gorgeous at times, they bring Eichiro Oda’s world to life in 3D like no other One Piece game has before it.

The world and its characters pop with color and energy that maintain its cartoonish personality, while small touches like reflections on water and metallic surfaces sell the effort put into making the world detailed.

This sense of immersion is bolstered by the title’s design and gameplay. Presented as an open world title, players are given free rein of Luffy’s Gum Gum abilities to stretch, launch and bounce their way across Prison Island.

They can slingshot across areas by grappling Luffy’s rubber limbs to ledges, careening through the air before finding another launching point or floating across gaps with his Gum Gum UFO flight ability.

This makes traversal a blast, and even after hours of play, it remains a novel and ideal translation of Luffy’s abilities into game form.

The same can be said of the combat. Dividing Luffy’s array of abilities between Observation and Armament Haki modes, players must consider which approach to use against any given enemy.

Some might require fast strikes and quick reflexes to dodge their attacks, making Observation Haki ideal. Others require strong, decisive blows and a rock-solid guard, both of which are only offered with Armament Haki.

This is illustrated by the combos and moves the player can utilize in combat. Observation Haki utilizes multi-hit combos with moves like Gum Gum Gatling, while also allowing players to slow down time with properly timed perfect dodges.

Armament Haki, meanwhile, features slower but harder hitting techniques and abilities. This includes the Gum Gum Bazooka and the Giant Whip, which can each level large groups of enemies when aimed properly.

Most all of these abilities, as well as the player’s stats and other gameplay elements, cane augmented with new skills purchased from the game’s branching skill trees.

Though easy to fully fill out in the late stages of the game, these branches help to cater to a given player’s style. One could focus on damage dealing skills, boosting their defenses or enhancing their options for movement as they see fit.

This is all topped off with the game’s crafting mechanics for making new equipment and costumes. While simple and a bit bare bones, they can drastically boost the player’s stats and lend some variety to Luffy’s usual wardrobe.

It’s still possible to muscle your way through without delving into this design depth, but putting in the effort rewards the player with a more immersive experience by making battles flow with the same fast-paced action of the source material.

It’s all very impressive, and developer Ganbarion deserves high praise for how well they’ve translated these elements to an interactive medium.

With that said, though, the game isn’t without its flaws.

While One Piece: World Seeker is a decent length when you factor in side content, the main story only lasts 10-12 hours. This would be OK but several points in the story feel padded-out, requiring the player to complete fetch quests before they can progress the story.

Likewise, much of the title’s optional content starts to feel repetitive in the game’s later quests and side content.

There are still standouts, most of them relating to character development for Jeanne and Isaac, but more often than not they devolve into item gathering requests and the “go there, fight these enemies, come back” variety.

The game’s music doesn’t help with this repetition either. Though pleasant enough at first, the limited soundtrack becomes more and more noticeable the longer you play, especially if players aim to complete all of World Seeker’s optional content.

And yet, even with these flaws, it remains entertaining. The gameplay and story continue to pull you in with each passing hour the same way the manga or anime would.

One Piece: World Seeker nails what makes the series as beloved as it is, and does justice to its source material in a way other One Piece games haven’t.

It may not be perfect, but it’s still well worth a look for both longtime fans of One Piece and newcomers who want to see what a proper game based on the series can be.