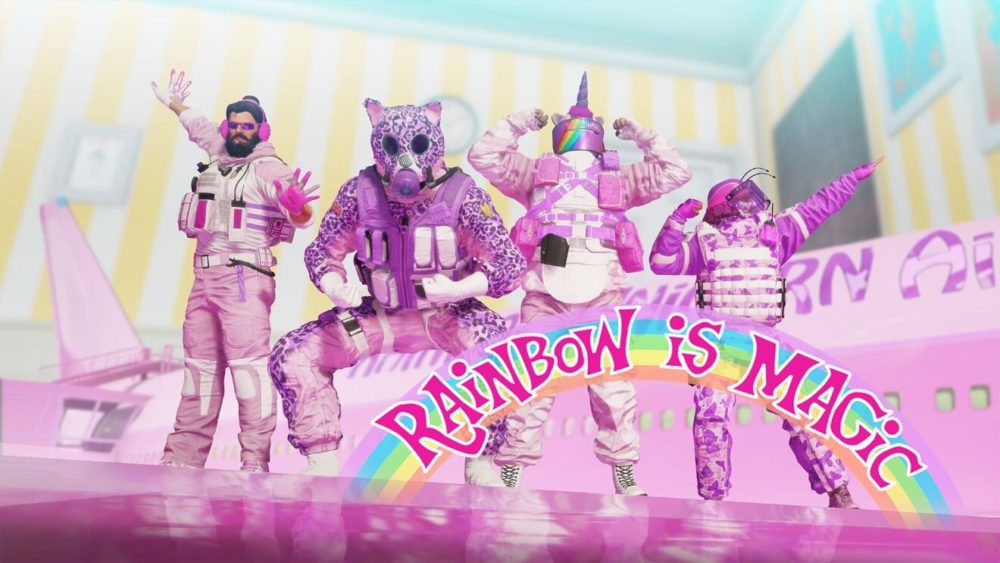 In honor of April Fools’ Day, Ubisoft has launched the new Rainbow is Magic Rainbow Six Siege event. From now until April 8 the game’s Plane map will be reskinned to look like a toy plane in a child’s bedroom, and the hostage is now a VIP teddy bear.

Ubisoft has also added a handful of new skins that are appropriately colorful for the toy-themed event. Players can even receive a free Rainbow is Magic Collection Pack if they log in before April 9.

Additionally, Ubisoft has even gone so far as to wholly redesigned the official Rainbow Six Siege website for the event. This new look is complete with heavy usage of a rainbow color palette and sparkly unicorn cursor.

The site is also where you can participate in the Rainbow is Magic GIF contest which is taking submissions until 12 PM EDT April 8. Ubisoft will choose the ten best GIFs, and the winners will be given the complete Rainbow is Magic Collection. You can learn more about the contest, prizing, and official rules here.

This event seems like the perfect way to celebrate April Fools’ Day as most “official reveals” that happen today are nothing more than a fun idea turned into a fake video. With Rainbow is Magic though, Ubisoft has gone the extra step of delivering on their joke and actually bringing a fun twist to their game for Siege players to enjoy.

You can watch the trailer for Rainbow is Magic below. For more on Rainbow Six Siege, check out our recent guides on How to Get Burnt Horizon Operators and How to Get Currency Packs & How Much They Cost. We also have a ranking of the Top 10 Best Operators to Use which is helpful if you are a new player.