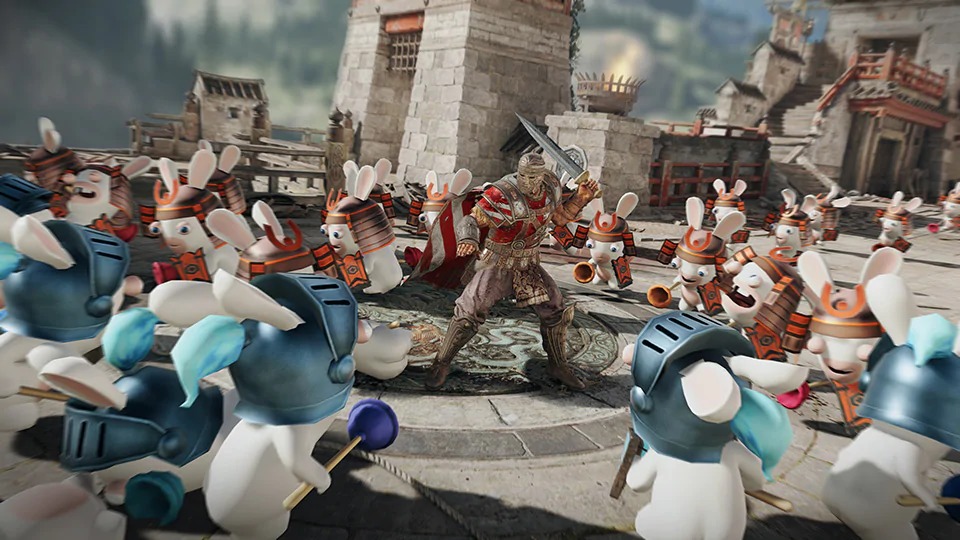 Additionally, players who play For Honor during this time will be gifted a melee pack for participating in the April Fools’ festivities. Ubisoft also provided the following statement in their news post about the event:

“This event comes as a part of For Honor’s Year 3 content, called Year of the Harbinger, which also recently saw the addition of The Black Prior to its roster of more than 20 Knights, Samurai, Vikings, and Wu-Lin. New content will continue to roll out throughout 2019, including additional seasonal events.”

Players will have to wait and learn more specifics about what is in store for the game during the next year, but for now, bringing the Rabbids to For Honor is a great way to celebrate April Fools’ Day.

Most “announcements” that are revealed today are nothing more than a fun concept turned into a fake video or photo. Here though the developer has gone the extra mile of actually delivering on their idea.

This event is part of a larger April Fools’ Day plan that Ubisoft has been rolling out throughout the day. Rainbow Six Siege also started their toy-themed Rainbow is Magic week that brings with it new skins and visual changes to the Plane map.

You can check out the trailer for the Rabbid invasion below. For more on For Honor, you can check out our guide wiki which covers topics like Multiplayer Tips for Success, All of the Differences Between For Honor’s Factions, and Character Stats Explained.