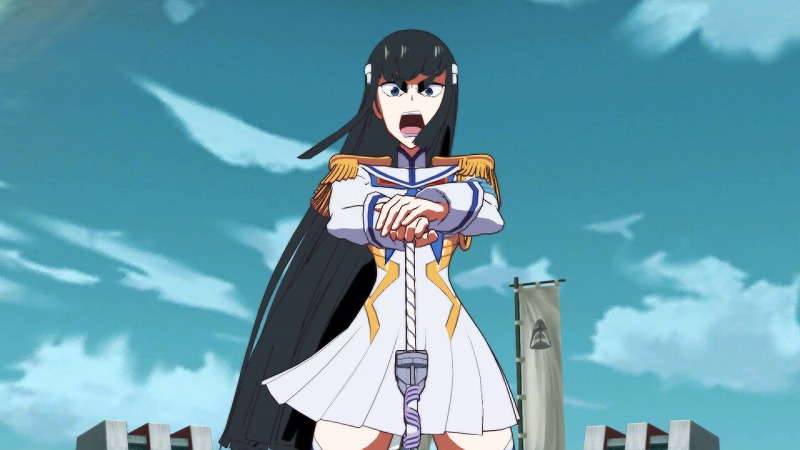 We get to take a look at the animation supervised by Studio Trigger, which originally created the anime series. On top of that, we get the first glimpse on the story mode, supervised by the anime’s original writer Kazuki Nakashima.

Kill la Kill the Game: IF’s story branches off from the original at the beginning. It isn’t Ryuko Matoi appearing in front of Satsuki Kiryuin, but Ragyo Kiryuin herself. The reasons behind that are still a mystery. The Story Mode alternates battles with animated storytelling.

We also get to see the Practice Mode that lets you learn the basics of the game under the guidance of Sewing Club leader Iori Shiro in the Tutorial. On the other hand the Training Mode lets you set the stage, characters, CPU behavior, and more. There are also additional settings like regeneration, blood level, and more.

Further gameplay modes include the Winning Challenge, that lets you fight random enemies while regenerating only part of your energy after each victory.

The Covers challenge lets you fight against the Covers that keep appearing on screen. Each time you defeat one, various items appear. It comes with three sub-modes.

The 1-Minute Challenge prompts you to defeat as many enemies as possible in one minute, with time extension items being dropped by some. The 100 Challenge has you fight against a hundred enemies. The Endless Battle does exactly what it says on the tin, providing you with an infinite supply of enemies to fight until your un out of juice.

You can check out the screenshots below. If you want to see more of Kill la Kill the Game: IF, you can also enjoy some recent gameplay and an older video.