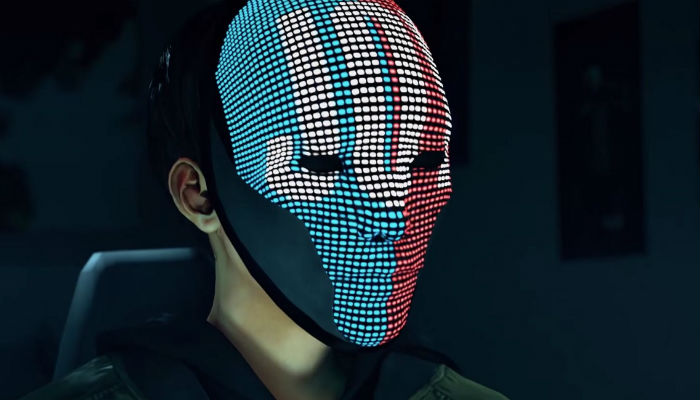 Announced as a timed exclusive for the Switch version of Payday 2 last week, hacker Joy is the star of the latest trailer for the cooperative heist game. Fans got their first glimpse of Joy as part of last week’s Nintendo Mini Direct, and the trailer gives her a little more personality.

Payday 2 is a cooperative first-person shooter that has players a gang member in a notorious crew as they work together to execute a variety of heists, including bank robberies and drug distribution alone or with up to three teammates. The Switch version of the game will allow for local multiplayer sessions with up to four players.

Joy joins an already expansive crew of criminals in Payday 2, and based on the trailer it looks like she’ll fit right in. Her LED mask (which lights up red and blue in the trailer, cleverly referencing the joycons) and hacking abilities will definitely add an interesting twist to the action.

Although Nintendo announced that she’ll have her own weapons and perks, it’s still unclear how long Joy will remain exclusive to the Switch. Payday 2 currently has over 30 different DLC packages, all of which was included as part of the Crimewave Edition that launched on PlayStation 4 and Xbox One in June 2015. Payday 2 breaks into the Switch on Feb. 27.