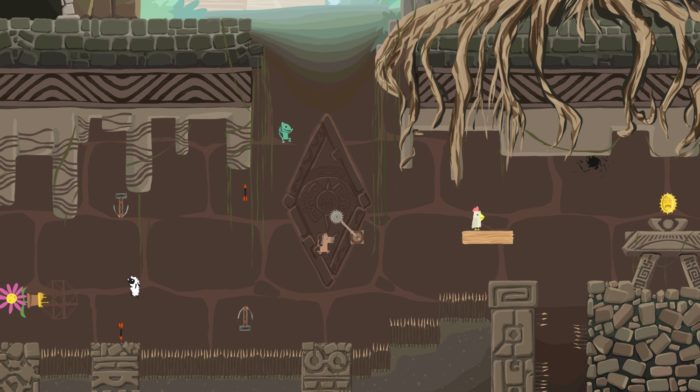 Multiplayer level builder Ultimate Chicken Horse is en route to the PS4 next week, bringing with it everything released so far from its PC edition along with a bunch of new content.

Launching the same day as its PS4 debut, the Elephantastic Update introduces a new elephant character and a host of new extras, including a temple level that features a unique coin that can be collected to unlock a dangerous obstacle for players to avoid. New blocks include a paper plane launcher that players can ride along, fan blowers to launch players into the air and pressure trigger spike traps.

For those unfamiliar, Ultimate Chicken Horse pits up to four players with and against each other to get from one point on a level to another, by using various blocks and platforms that can help or hinder the cause.

A range of levels and modes have already been revealed over the year on PC, including the ability for players to create their own levels for others to download and play. Those levels will also be available to PS4 users through a limited form of cross-play, allowing players on both platforms to play against each other. Developers Clever Endeavour are currently working on both Xbox One and Nintendo Switch ports for release in 2018, but for the time being cross-play doesn’t seem likely.

Ultimate Chicken Horse launches Dec. 12 on PS4, with the Elephantastic update available on the same day for PS4 and PC players.