Steam, the biggest gaming platform and storefront for PC users and possible across all of gaming, has reached a new peak concurrent user count today. Hot on the heels of the Steam Autumn Sale, which has pulled in users far and wide, 17 million users were logged in to Steam at the same time. No doubt, the sale has pulled in some crazy numbers, but this new peak is something entirely new and impressive to behold. 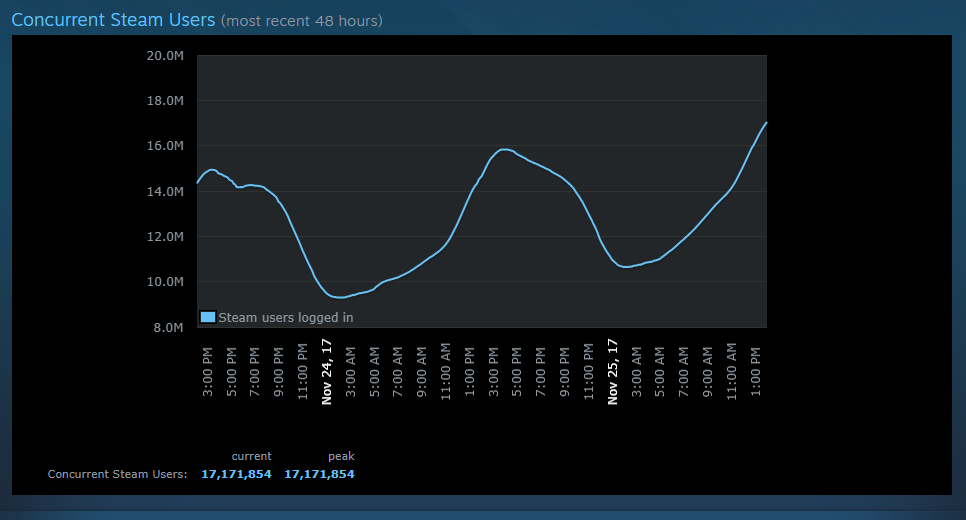 The last milestone of concurrent users, 16 million, was hit on October 1, taking only 2 weeks to climb to that number from 15 million. It seems Steam isn’t gonna slow down any time soon, and the storefront and users will just exponentially grow. An interesting thing to note is that PUBG, which is easily the platform’s most popular game right now, makes up almost 3 million of the 17 million milestone. The game was only released this March, and hasn’t even left early access yet – it’s truly taking over the world.

Steam’s Autumn Sale dropped a few days ago, and will be running up until Tuesday, Nov. 28, so make sure to pick up some deals if you have the chance. There’s every chance we could see a new record from Steam before the sale’s up, but don’t hold your breath.

Credit to Dex3108 on ResetEra for the stats.