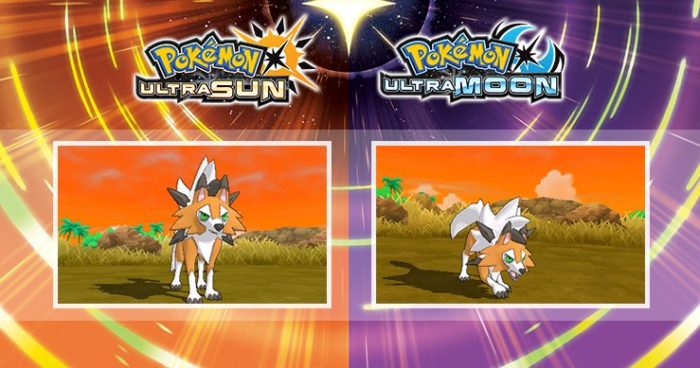 Attention Pokemon Trainers! A new Pokemon will be appearing in both Ultra Sun and Ultra Moon. Well, not a new Pokemon, but a new form. Meet Dusk Form Lycanroc.

The colors of Dusk Form Lycanroc’s fur and eyes differ from that of its Midday and Midnight forms, and unlike the similarly styled Pokemon, while one was exclusive to each version of Pokemon Sun or Moon, Dusk Lycanroc will be featured in both Ultra Sun and Ultra Moon.

However, in an official post from Pokemon.com, this little ‘Mon won’t be as easy to come across as its Midday and Midnight forms, “You can’t get Dusk Form Lycanroc on your team by ordinary methods, such as discovering the mysterious Pokémon in the wild.”

The posting also asks that trainers wait for more information to come out about Dusk Form Lycanroc, as well as new details on the upcoming titles.

Not sure about Pokemon Ultra Sun and Pokemon Ultra Moon? Well following the success of the titles Pokemon Sun and Pokemon Moon, the Ultra versions of the games are getting an alternate story arc that will take place in the tropical setting of Alola. Dusk Form Lycanroc is most likely the first in a lineup of Pokemon not available in the original release of Sun and Moon as it was announced back in June that there would be more new pocket monsters on the way.

Pokemon Ultra Sun and Ultra Moon are expected to launch Nov. 17, 2017, for the Nintendo 3DS family.