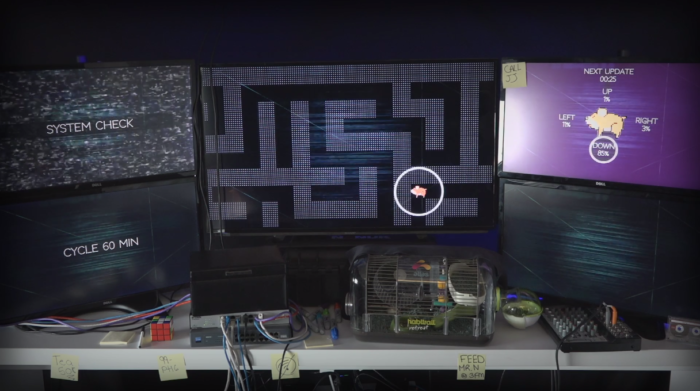 A No Man’s Sky alternate-reality game, Waking Titan, has been going on since June. Many fans think the ARG is a teaser for a large update that may be coming sometime this month, though Hello Games hasn’t revealed any plans for significant additions to the game. Things have gotten even weirder with a livestream that popped up yesterday on the Waking Titan Twitch account, which is still playing as of this writing.

The Waking Titan livestream shows a monitor sitting on a desk with a small habitat containing a hamster below it. A memo, released from a fictional character named Major Sophia Dubois states that the hamster is called Subject M-N00-dl35 and that it will not be harmed and is being taken care of by dedicated staff.

Since the appearance of the livestream yesterday, several puzzles have appeared on the computer monitor, and when solved by the community, have led to further memos written by in-universe Waking Titan characters. Whether or not this will tie into a new update for No Man’s Sky is anyone’s guess. Previously Hello Games released two large updates for the game. The Foundation Update added player-owned frigates and planetary bases, and the Pathfinder Update added land vehicles.

For now, we’ll just have to wait and see what Hello Games has in store for No Man’s Sky.