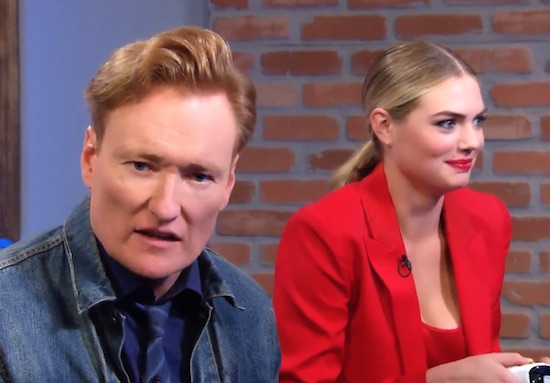 Cuphead was announced during E3 2016 and is an upcoming Xbox exclusive game that sees charming 1930’s animation brought to life through the power of video games. We got to see plenty more of the game at this year’s E3 and now it’s the latest game featured in comedian Conan O’Brien’s Clueless Gamer series. This week, he and Kate Upton tackle the game.

Upton herself is pretty familiar to video games as she starred in the adverts for the Game of War mobile game. Given that Cuphead is a multiplayer game, Conan and Upton work together to play through the game. Judging by the video, we can’t help but wonder if Conan had ulterior motives for inviting Upton to play Cuphead with him.

It seems the game is pretty tough as Conan dies a few times. Kate seems to be a natural gamer as she goes on to defeat the boss. Cuphead is set to be released on the Xbox One and Windows 10 on September 29. It was recently confirmed the game will not see a release on the PlayStation 4.