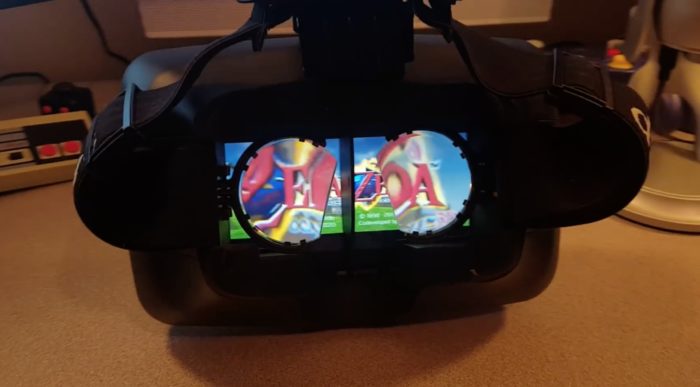 It may be possible that the Nintendo Switch could support VR functionality in the future, as not only did Nintendo patent a head-mount display, the company President Tatsumi Kimishima stated in an interview with Nikkei, “Nintendo is studying virtual reality functionality to the new console. If we are able to resolve the issues with playing [VR] comfortably for long hours, we will support it in one form or another.”

YouTuber Nintendrew, who as you could guess from his user name covers all things Nintendo, took matters into his own hands by using a Durovis Dive 7 VR headset meant for smart phones and tablets to try out VR on his own Switch console.

By hijacking the web browser using this tutorial, he is able to bring up a YouTube video featuring 3D footage of Ocarina of Time. The Durovis Dive 7 headset happens to fit the Switch perfectly, but Nintendrew states most tablet based headsets should work okay.

The test was successful, although with some issues. Since the screen is so close to the face, edges seem jagged with a screen-door effect on the display. As well, only what is centred on the screen is visible to the human eye, with the edges getting lost in ones peripheral vision.

Issues aside, this test does show promise to the Switch’s VR potential. A headset that allows the screen to be set further back than other models might help the aliasing and display issues, while also figuring out a way to expand the Switch’s breadth of its visual display so not so much of the screen is lost to the eye. We’ll have to wait and see how the Switch progresses, and if Nintendo feels VR would be a valid inclusion to its functionality.