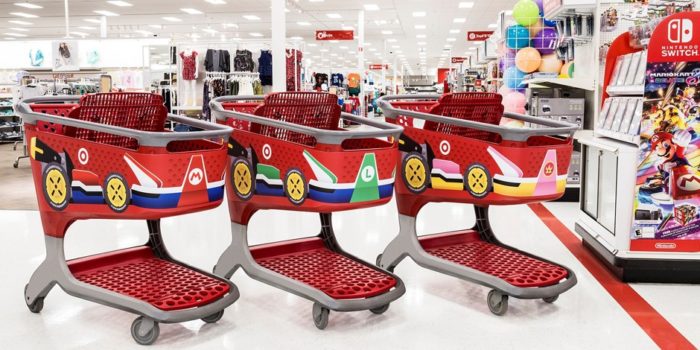 The release of Mario Kart 8 Deluxe on the Nintendo Switch is right around the corner, and Nintendo has partnered with Target stores around the nation to celebrate. Target announced the news themselves today, along with a preview of what you can expect to see in-store. It’s clear that Nintendo is really doubling down on both the Switch and Mario Kart 8, which was one of the best-selling titles on the Wii U. More than 650 stores will be participating in the promotion.

You’ll be able to spot participating Targets without even entering, as the giant concrete balls outside of each store will be dressed up as the faces of Mario and Luigi.

As you enter you’ll notice the doors adorned with starting line decorations from Mario Kart, and store carts adorned like the karts themselves. There’ll be three different types of carts inspired by the design of Mario, Luigi, and Peach’s karts respectively.

Mario Kart 8 Deluxe launches on April 28, exclusively for the Nintendo Switch. If you want to see everything new added to the updated title, you can see that here. While you’re at it make sure to check out the latest trailer detailing the game’s battle and circuit modes.

What do you think of Target’s Mario Kart 8 promotion? Would you like to see Nintendo do more things like this in the future? Leave a comment and let us know.