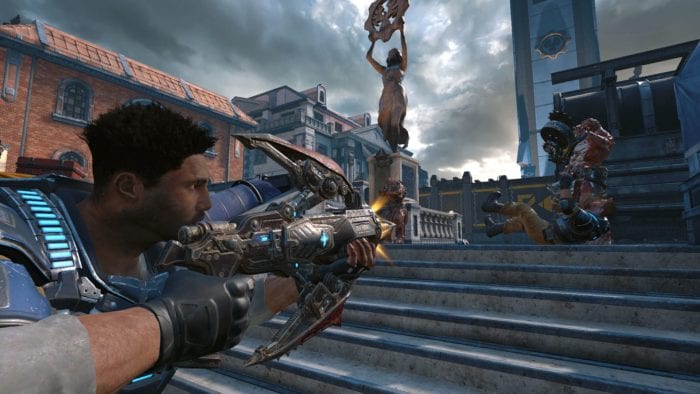 The March update for Gears of War 4 is out “later today” and adds two more maps, ranked lobbies, and previously announced changes to the Gnasher, The Coalition announced today.

The first map is Diner, a small building out in the middle of the desert, and features close range combat inside the neon-lit establishment. The studio noted the map was developed “over the course of the last 18 months,” which is long considering Gears of War 4 launched in October 2016.

The other map is Old Town, a re-imagining of the Gears of War 3 map, set in a snowy UIR Costal town. Both maps are available today for season pass holders in the Developer Playlist, which offers double XP and 20% more credits. All players can access the new maps in the multiplayer map rotation on March 14.

The update also brings ranked lobbies to Core and Competitive playlists, which was highly requested from the community, the developer said. Players will be matched in a pre-game lobby where players can vote on maps, equip bounties, and change customization options.

“If a player quits prior to the match beginning, the pre-game countdown will cancel and continue searching to keep matches balanced,” the studio said about the lobbies. “Once the match is over, you’ll be automatically returned into the Lobby search for your playlist without having to manually restart.”

Updates to tune Core and Competitive playlists are planned for “the next couple of weeks.” Also coming this month is a new Legacy character, teased in an image to be Locust, and more weapon skins.

In addition, The Coalition will be holding monthly weekend events for Versus and Horde playlists every third Friday after a new update. The first Versus event will begin March 24, while the Horde event starts on March 31. The game had its first Horde variant playlist last month, and offered special weapon skins for completing objectives.