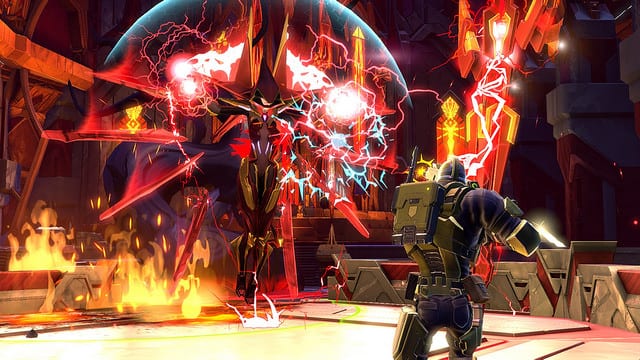 Today is a big day for any fans that have stuck with Battleborn. Along with a host of balance changes, new Halloween-themed “spooky skins,” and quality of life changes, the month of October sees a new, free PvP mode drop for the game, along with the first piece of Story DLC.

Rolling out today, the October update fixes many of the small issues fans had with the game such as allied character collision, for player characters and projectiles. Gearbox posted the exhaustive list of changes on the Battleborn forums.

Mush more exciting is the addition of the new PvP mode and Story DLC. The new competitive mode, Face-Off, sees two teams of players fight each other and a third force of increasingly difficult AI enemies. And if that didn’t make things interesting enough, the AI even gets their own boss waves.

Meanwhile, Attikus and the Thrall Rebellion is the first piece of campaign DLC for the game. “Join the Battleborn hero Attikus as he relives the third Thrall uprising that sparked a revolution within the Jennerit Empire. Play solo as any Battleborn hero or co-op with up to two buddies as you fight your way through the streets and rooftops of the Tempest slums,” 2K Community Manager Kit Lukinov explains on the PlayStation Blog.

Inspired by old detective noir fiction, the DLC is framed as Attikus looking back and telling the story of the rebellion like the old, grizzled veteran he is.

Attikus and the Thrall Rebellion is the first of five story missions releasing for the game. Gearbox promises even more content to come, along with two more characters, and another free PvP mode. The story mission, the new competitive mode and the balance changes are now all live.