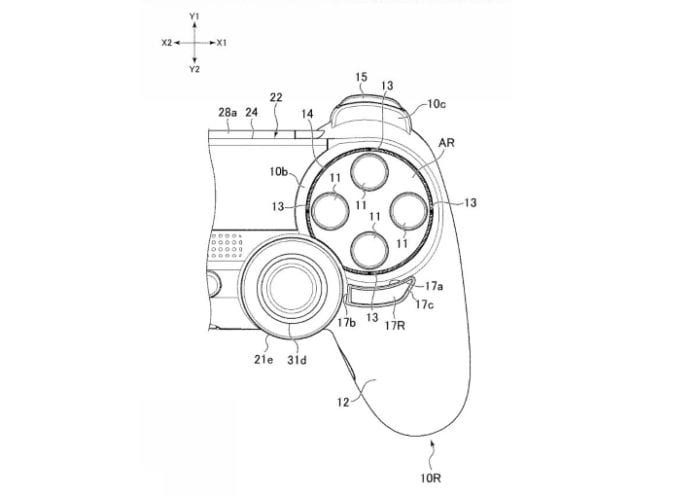 Sony is not the type of video game company to just sit back and watch another corporation take its place as the top seller in the industry. At all costs, Sony delivers. With the PlayStation VR coming this October, and an array of titles revealed at this past E3, there is plenty in the pipeline to ensure the company’s success, but that’s not enough. With a new sort of console, currently codenamed PlayStation Neo, on the way, it’s only natural that they continue to up their game, even down to their controllers. With this in mind, it makes perfect sense as to why Sony just patented a new DualShock 4 controller.

A NeoGAF user by the name of Kyoufu happened upon the patent for the new controller, and it’s pretty interesting, especially considering the recent release of the Xbox One’s Elite Controller, which brought four new buttons, an altered directional pad, and various customizable settings. Suffice to say, Microsoft has released their controller with professional gaming in mind, and Sony may be taking some pointers.

The newly patented DualShock 4 controller has two new buttons, both on the grips of the controller, not unlike the four new buttons on the Elite. What are likely to remain the Start and Share buttons have been moved to new spots below the d-pad on the left and the primary buttons on the right.

Here is said controller. Print it out now, and it’ll yours before anyone else gets one.

This decision could solve two problems: the common mistake of accidentally pausing the game in the heat of the moment and widening the touch panel for ease of use. While being one of the DualShock 4’s stranger ideas, the touch panel has found great uses for developers as simply being alternate buttons for more menu options. Increasing the size of the panel would make use easier, but it could also inspire more developers to use the actual touch functionality of the panel to a greater extent. Nevertheless, it seems to be a risk worth taking for Sony.

As for accidental pausing, the location of what is likely to still be the Start and Share buttons are interesting, to say the least, but it’s still too soon to see whether or not it will be a big help. If anything, it might actually make it more difficult to avoid.

Whether or not this controller sees the light of day is anyone’s guess, but it’s likely. It’s not too wild of a controller, and it has some nice additions that could change the game for how video game developers approach developing for the PlayStation 4. Still, this controller has not yet been announced or shown off by Sony themselves, so, if you like it, here’s hoping you’ll get to own one someday.