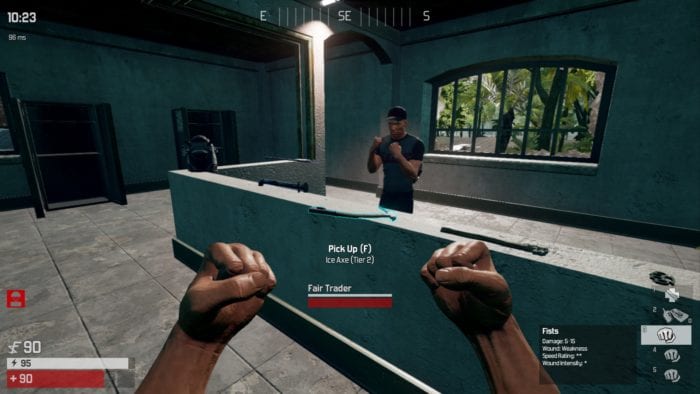 The Culling is called a virtual Hunger Games for a reason – you enter an arena to scavenge and murder until you’re the last contestant standing. In the face of inevitable death, though, some players have started taking up the role of shopkeeper, standing watch over a counter of collected goods and praying other players will hang up their homicide hats long enough to make peaceful trade.

The shop trend is sweeping The Culling community, with new shopkeepers emerging each day, each with their own stories of war and peace. Some even compose lovely fan fiction of their humble lives. Others just get killed a lot. It’s a lot less poetic.

But the life of a shopkeeper is one of duty. Waking each day to the sound of your own death. Watching your customers get slaughtered minutes after leaving your shop. Should the shopkeepers make it to the end of a round, it is their sworn duty to kill themselves with honor.

The story of Shopkeep Sammy is but one of many, filled with loss and bravery. And then there’s Ace Conklin, who rigs C4 in case his customers try any funny business. You can watch his day as a shopkeeper below.

The Culling is available now on Steam Early Access. Let us know if you’ll be joining the battle as a noble shopkeep or as a dirty shopkeep murderer.