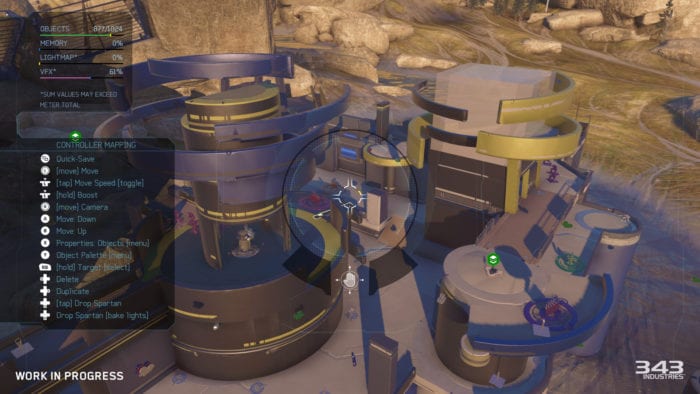 The next update for Halo 5, coming next week, promises to be a big one. On top of new weapon skins, armor types, and multiplayer maps, the update also introduces the newest incarnation of The Forge, a map editor that has been a staple of the series since Halo 3.

Key features of the new Forge system include its updated lighting system, including animated lights, its updated special effects, its welding features and its new magnet design, as well as a ‘scripting system’. The map editor seems to be eerily approaching the standards of an actual game design engine, as it allows for players to script in switches and program objects to respond to the interactions. While in the livestream this was only used to lift a gate, we can only imagine what will be done with this feature.

Nearly every variable of an objects seems customizable now, from making objects invisible to changing the color, as well as greater control over features such as teleporters and catapults. Lights come in a variety of colors, with overlaying texture masks allowing for things such as spinning galaxies and rotating fans.

The magnet snap feature has been redesigned and upgraded, allowing things to be built easier. This, in addition to the inclusion of simple shapes, means almost anything can be built fast and easily. Additionally you have texture variation on organic shapes, such as rocks, to prevent things from looking too repetitive.

And of course there will be toys.  Timmy the Whale played a big part in the presentation, with his friend, Olive the space pig.

The Cartographer’s Gift update will be released sometime next week.