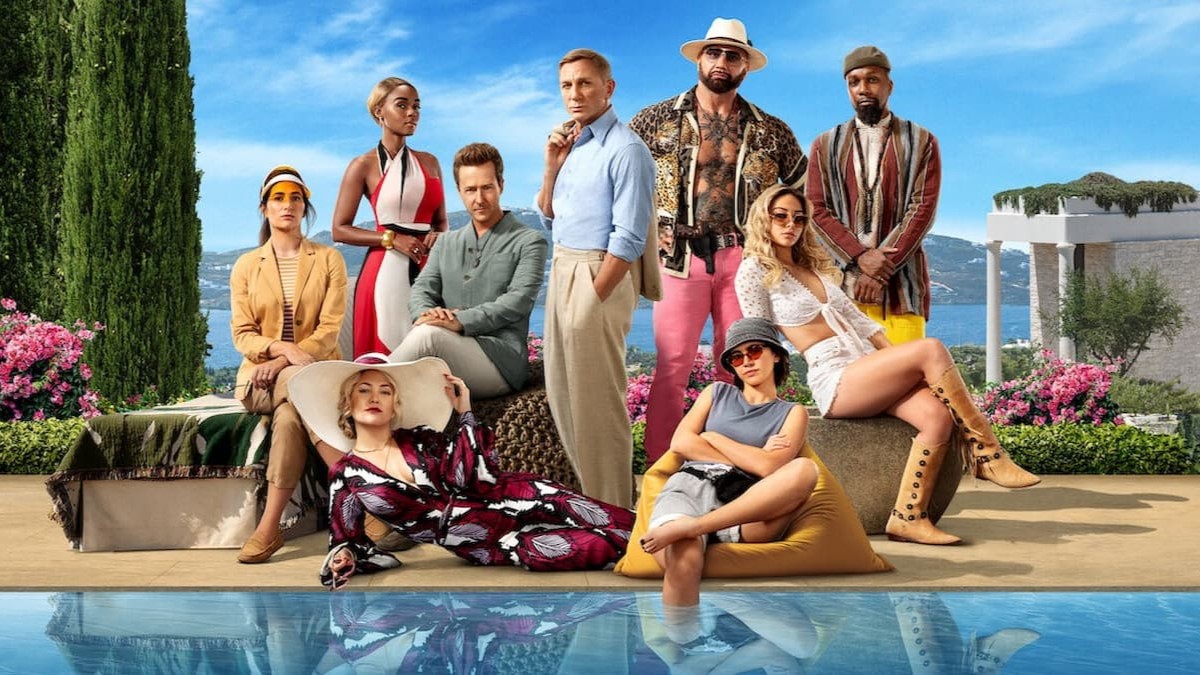 The highly anticipated sequel to Knives Out, Glass Onion, has finally arrived on Netflix with a new cast and a story that is to die for. Like any murder mystery, the primary aspect of the film is to reveal the killer’s identity by locating clues and using the evidence to form your own conclusions. But, if you want to cut right to chase, we’ll tell you who is the killer in Glass Onion: A Knives Out Mystery and which characters meet their unfortunate end.

**Major Spoiler for Glass Onion: A Knives Out Mystery**

Who Dies in Glass Onion? Answered

The two characters who die in Glass Onion are Duke Cody (Dave Bautista) and Andi Brand (Janelle Monae.) At the film’s start, there’s a subtle mention of Duke’s severe pineapple allergy, which ultimately kills him when he unknowingly drinks a cup of this particular juice. But, of course, since this is a whodunnit movie, this death does not happen by accident, and it is part of the killer’s plan.

Andi Brand’s murder is a bit more complicated because she dies before the events on the island occur. This reveal may come as a surprise since several Glass Onion trailers showcase Monae’s character alive and well. However, the person we see on the island isn’t Andi, but it is, in fact, her twin sister, Helen, who is trying to unravel the truth about her sister’s death.

On paper, Andi committed suicide by inhaling deadly gas inside her car after losing everything in a trial against her former partner, Miles Bron (Edward Norton.) In the past, these characters built a money-making empire called “Alpha” until Bron took over the company and kicked Andi out. Although it seems to be suicide, Brand was murdered in another ploy from the killer.

Who Is the Murderer in Glass Onion? Answered

The killer in Glass Onion: A Knives Out Mystery is none other than Miles Bron, who murdered both Duke and Andi. First, let’s take it back to the beginning of this Knives Out sequel, where the characters begin to form their squad at their favorite local bar, the Glass Onion. The original group includes Birdie Jay (Kate Hudson), Duke Cody, Claire Debella (Kathryn Hahn), Lionel Toussaint (Leslie Odom Jr.), and Andi Brand as the leader. During this time, each member didn’t have a name for themselves and struggled to make it in their respective industries.

Everything changes when Andi introduces Miles, a charismatic individual who helps everyone with their careers. For instance, he establishes Claire’s political job and assists Duke with his Twitch channel. At the same time, Andi becomes inspired by all of these advancements and writes up an idea on a napkin at the Glass Onion, resulting in the creation of Alpha. Eventually, Miles and Andi partner together on this project and end up millionaires once everything comes into place.

Unfortunately for Andi, Miles becomes greedy and finds a way to get her out of the company, despite it being her idea. To make matters worse, he even persuades the rest of the group to say that he was the one that wrote the proposal for Alpha and fabricates his own napkin to continue the lie.

After Andi loses the case, she finds the original napkin of the idea and sends an email to all her supposed friends to threaten them with the truth. It isn’t long until Miles races over to her house with his flashy, expensive car and kills her to prevent the secret from coming out. But, just as he drives out, Miles runs into Duke, who also goes to Andi’s home to talk to her.

Later in the story, Duke finds out about Andi’s death and concludes that it isn’t a suicide after he saw Bron at her house the day she was murdered. Unbeknownst to everyone else, Cody silently blackmails him with this knowledge to expand his career. In retaliation, Miles hands him a glass of alcohol mixed with pineapple juice (Duke’s one allergy) to keep his secret hidden.

Thanks to the detective work of Benoit Blanc and Helen Brand, Bron’s plans are foiled when they reveal the truth to the group. Yet, even if they don’t get any evidence to back this claim up, they still get their revenge by ruining his next project, which presumably will tarnish his name and company.

Now that you know who the killer is in Glass Onion: A Knives Out Mystery, you can try to spot subtle hints of Miles’ demise throughout the film. For more whodunit content, be sure to explore the relevant links below, including our feature of the top 10 best murder mystery and detective movies and the latest news about an anime thriller coming to Netflix.