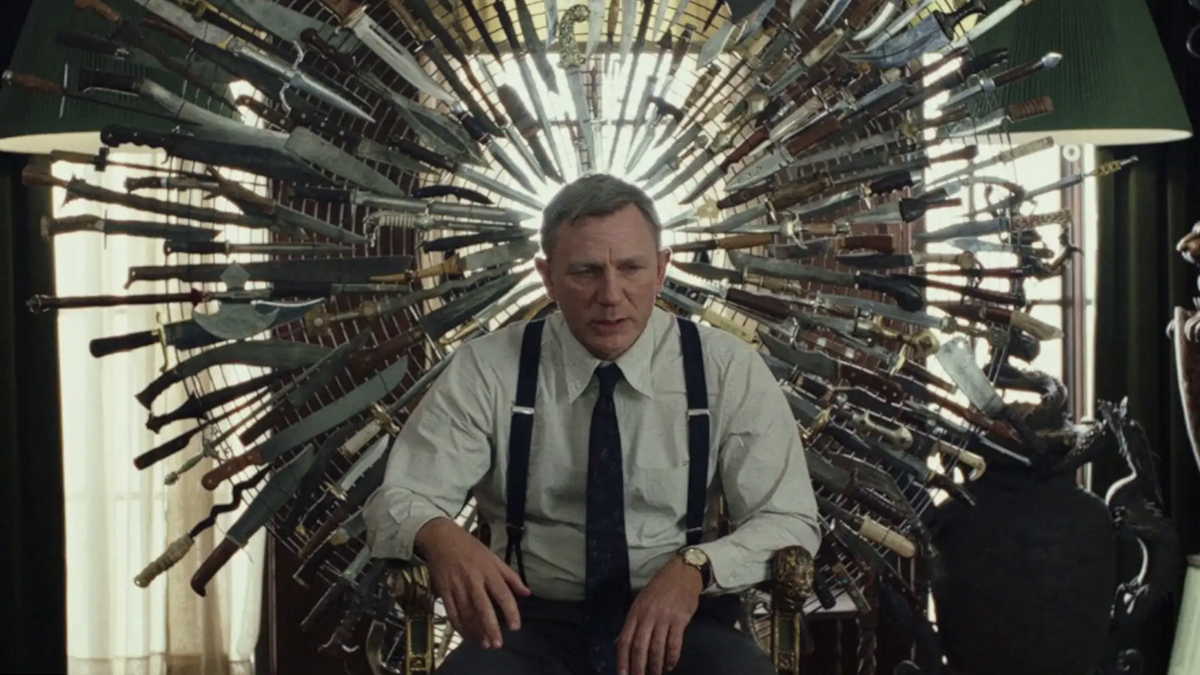 The world of murder mysteries and detectives has always worked wonders on movies as it has the perfect structure: you have a mystery at the start that must be resolved in two hours. The genre is one of the oldest and richest in cinema history, one that had its start in the 1920s and as Knives Out proved, still works. Here are the 10 best murder mysteries and detective movies, ranked.

Small-time crook Harry (Robert Downey Jr. before he became Iron Man) gets cast in a movie after entering an audition just to lose the police following him. Once he’s part of the Hollywood eco-system, he gets mixed in a murder that happens in the most sordid parts of the industry. With the help of old friend Harmony (Michelle Monaghan) and private investigator Gay Perry (Val Kilmer), Harry must solve the crime.

Written and directed by Shane Black (writer of Lethal Weapon and director of Iron Man 3), this film noir parody, full of funny quips and smart dialogue, is the perfect film for fans of the genre, as it makes fun of the usual trappings of detective movies.

Kiss Kiss Bang Bang was one of the first times since he got sober that Downey Jr. showed how magnetic, funny, and mischievous he could be, all abilities that helped him inhabit Tony Stark.

Detective Philip Marlowe gives his friend a lift to Mexico, then the friend’s wife turns up dead. Then so does the friend. A conspiracy is afoot, and Marlowe might be the only one able to solve it.

Based on the book of the same title written by Raymond Chandler, Robert Altman’s adaptation is more modern and puts the character in 70s Los Angeles. This Marlowe (Elliot Gould) is a different kind of detective, one more chill and less tortured, more fan of smoking a joint than having bourbon for breakfast, but he still has the same ideals as the original Marlowe.

Although Altman changes the setting and characterization, the mystery is pretty much the same as in the book, with two crucial changes to surprise both the reader and the viewer. “The Dude” in The Big Lebowski wouldn’t exist without this performance, as it might be its biggest inspiration.

Brendan (Joseph Gordon-Levitt) must find out what happened to his ex-girlfriend Emily (Emilie de Ravin), who appears dead inside a tunnel. A neo-noir film set in a high school, this movie uses all the archetypes of the genre but adapts them perfectly to its new setting, from the detective antihero to the patsy and the femme fatale.

Brick also uses the high school cliques (from the jocks to the drama kids, party girls, or burnouts) as if they were criminal gangs, and the vice-principal is the shouty policeman who knows the detective but doesn’t like his methods, making Brendan descent into the high-school underworld something fresh and unique for the fans of the genre.

This Chinatown with teenagers movie was Rian Johnson’s (Knives Out) first film and put him on the map as he proved that he knew how to mix genres and create impressive settings with a low budget. Spoiler alert, Johnson has another movie on this list.

Writer Holly Martins (Joseph Cotten) goes to visit his friend Harry Lime (Orson Welles) in Vienna. When he arrives, he discovers Lime has died in strange circumstances and decides to investigate while falling in love with his friend’s girlfriend, Anna (Alida Valli). The more he looks into Lime’s death, the more it looks like his friend had many dealings in the black markets of post-war Europe, and that might’ve killed him.

Often considered the best British film ever made, the black and white and mise-en-scene make The Third Man beautiful to look at, and Welles’s best role ever, after Citizen Kane. Director Carol Reed also has another secret weapon: the streets of Vienna, with its cobblestone boulevards, the post-war decline, and the shadows and paranoia from this city full of history.

6) The Silence of the Lambs

Although Anthony Hopkins steals the spotlight as Hannibal Lecter, at its core, this is a detective film, one in which F.B.I. cadet Clarice Sterling (Jodie Foster) has to find a serial killer on the loose, Buffalo Bill (Ted Levine).

Any great detective story needs a good villain, and there are not many better than Hannibal Lecter. He’s polished, smart, with expensive tastes, and he feels like he can manipulate this young woman and get out of prison. At the same time, Starling’s perceived vulnerability is one of her greatest assets, as she lives in a male-dominant world that underestimates her. In the end, it is her understanding of what it’s like to be a young woman that makes her find Buffalo Bill.

The Silence of the Lambs uses the detective story as an excuse for giving it a much more creepy, disgusting horror vibe while still using the genre as a base for everything that happens in the film. Does that make the cannibal psychiatrist Lecter the movie’s femme fatale? Yeah, it kind of does.

Famous crime author Harlan Thrombey (Christopher Plumber) dies of suicide to save his nurse Marta (Ana de Armas). Detective Benoit Blanc (Daniel Craig) investigates what happened and who in the family might’ve had motives to kill the patriarch.

The script is tight, and the resolution makes perfect sense, in this Agatha Christie homage proves Rian Johnson’s love for the genre of the whodunnit, using the murder mystery staples to create a modern, fun, surprising story.

This movie is the director’s second appearance on the list, as the murder mystery/detective genre is where he comes alive. Knives Out has an incredible cast: Chris Evans playing against type, Jamie Lee Curtis, Michael Shannon, LaKeith Stanfield, Ana de Armas in the role that made her a Hollywood star, and Daniel Craig having the time of his life. So much so that this is Craig’s new franchise, and you can watch the second movie in the saga, Glass Onion: A Knives Out Mystery, right now on Netflix.

Leonard (Guy Pearce) is a man who can’t make new memories after taking a blow to the head while witnessing the murder of his wife. Having no short-term memory makes his investigation to find his wife’s killer a lot harder, as he never remembers how his search is going or who is friend or foe is, so he decides to tattoo his body with all the clues.

Memento is a revenge story, a detective story, a story full of grief, rage, and confusion. Leonard is an unreliable narrator, as his knowledge is uncertain, and he might be tricking himself to have a purpose in life, while also being manipulated by other shady characters with their own agenda. How can a detective investigate if he doesn’t know what clues he’s already found out? That’s what makes this puzzle movie so effective.

Controversial opinion: other than The Dark Knight, this is Cristopher Nolan’s best film. Memento’s mostly remembered as “the movie that starts at the end and goes both forwards and backwards,” a story decision that makes the viewer feel as confused as the titular character, as every clue is new for both. The end/beginning will leave you as confused/satisfied as it leaves Leonard.

L.B. Jefferies (James Stewart) is a newspaper photographer with a broken leg, who passes the time during his recovery watching the neighbors through his window. One day, he witnesses what he believes is a murder and tries to solve it by himself. Only his fiancée Lisa (Grace Kelly) believes him, and his investigation might turn the killer into him.

Alfred Hitchcock’s Rear Window showed the director’s mastery of staging incredible sequences, as he created tension and drama from a small apartment with a convalescent lead character. Jefferies’ voyeurism and the continued breaking of privacy haven’t aged well in this pessimistic film, as most of the characters seen by Jefferies are sad, unhappy people with broken dreams.

The greatness of this movie is how the character and the audience experience and discover things at the same time. Hitchcock knows audiences are smart, so he shows everything needed to piece the clues together, making them participants in the detective story.

Rear Window is a masterclass on suspense; the viewer knows bad things might happen to the lead character the more he investigates and is getting closer to the truth. That angsty feeling follows the audience in each scene, creating an emotional reaction at the film’s end.

A pair of detectives, Mills (Brad Pitt) and Somerset (Morgan Freeman), must find a serial killer who, inspired by the Bible, has started a seven deadly sins-themed murder spree. As they go into the depths of hell to find the criminal, they also find some things about themselves. The film aesthetic is depressing, dark, mysterious, intense, and rainy, warning the viewer that what they’re seeing is not going to end with sun and rainbows.

Se7en also uses the detective structure against itself for maximum impact, giving every scene and clue its most creepy and disgusting outcome. It also proves how to put the genre upside down when (SPOILER for a 27-year-old movie) the killer walks into a police station covered in blood and turns himself in without the detectives’ involvement when there are still 20 minutes to go before the film’s end.

Kevin Andrew Walker’s script is as dark as they come, and director David Fincher fell in love with it so much that he fight the studio for every change they wanted to make, especially the ending, as they thought it was too dark. Although he was already known as a great, innovative musical director, Se7en cemented Fincher’s place in Hollywood as one of the most promising directors out there.

Based on the iconic board game, this comedy follows six blackmail victims invited to an isolated mansion by a man who knows their secrets. Once they arrive, each one is handed a pseudonym and a weapon. After the lights are switched off, the blackmailer is killed. Whodunnit? That’s the question.

Clue is clearly one of the inspirations for Knives Out and might be the best adaptation of a board game ever. The film works as a good Agatha Christie adaptation, with great direction by Jonathan Lynn (My Cousin Vinnie) and written by John Landis (The Blues Brothers), and an all-in-on-the-joke cast: Eileen Brennan (Murder by Death), Tim Curry (The Rocky Horror Picture Show), Madeline Kahn (Young Frankenstein), Christopher Lloyd (Back to the Future) and many more.