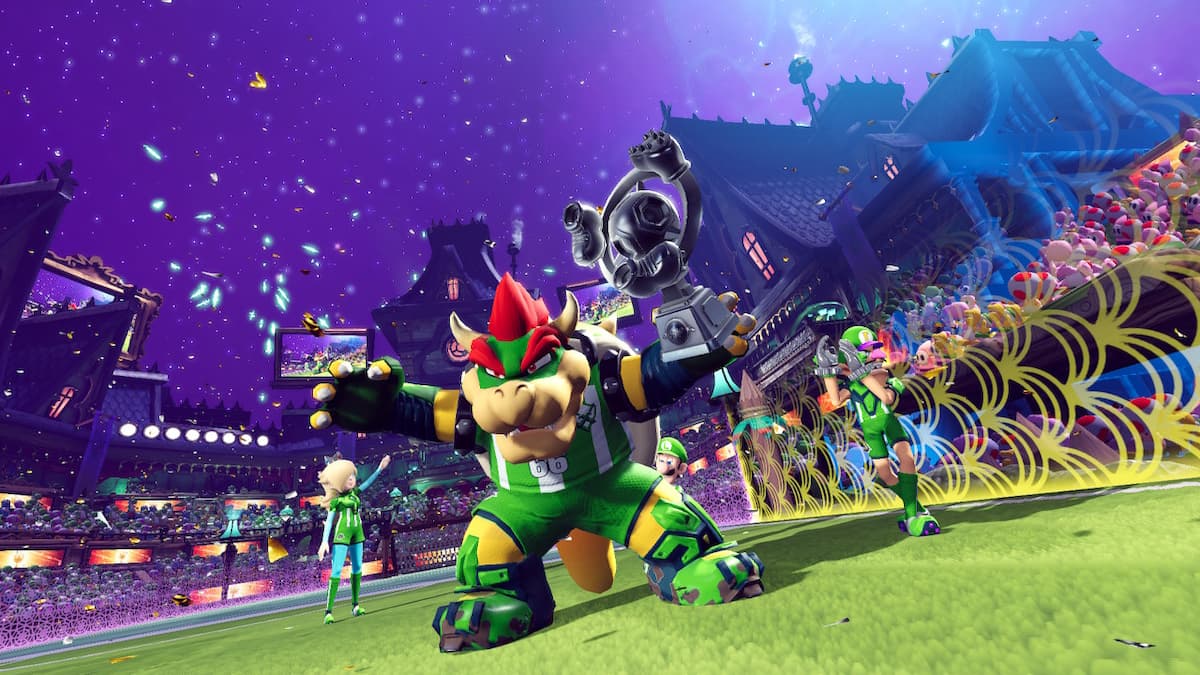 Winning in Mario Strikers: Battle League means having the team that scores the most. But you can’t do that if you don’t have forwards good enough or even skilled enough to make that happen. With a dozen playable characters to play, only a few are suited to play forwards. Here are the best characters for left and right forward positions in Mario Strikers: Battle League.

If you’re aiming to rack up as many points as possible, put Rosalina on your team in Mario Strikers: Battle League. It’s thanks to a combination of her innate speed, shooting, and Orbital Burst – her Hyper Strike. Try equipping Rosalina with a Trick Helmet, Cannon Gloves, Cannon Plate, and Cannon Boots, improving her strong stats further and raising the weaker ones.

While her passing and technique aren’t as strong, they’re serviceable. As it turns out, Rosalina doesn’t have to worry about passing when everyone she comes into contact with freezes.

Peach is in a similar boat as Rosalina. She too excels at being a fantastic forward, but with a slightly different approach. Rather than focus on strength, Peach is better at dodging. And with how fast Peach is, you can easily swipe the ball. In fact, speed and shooting are her two greatest stats.

Similar in use as Rosalina’s Orbital Burst, Peach’s Hyper Strike – Dance of hearts – stuns players she comes in contact with. It effectively doubles the effectiveness of her speed and goal potential. We suggest using a Bushido Helmet, Chain Gauntlets, Trick Pad, and Chain Boots.

Compared to Peach and Rosalina, you probably won’t score as often with Yoshi as you would the former. Yoshi is indeed good at shooting, but he earns a spot here due to his passing abilities. Combined with his speed, Yoshi is an excellent ally for making plays alongside another strong forward, like Peach or Rosalina.

If you bring along Yoshi, improve his strengths by equipping a Cannon Visor, Turbo Gloves, Cannon Plate, and Bushido Sandals. These will give Yoshi a boost of speed and better passing in Mario Strikers: Battle League

Every now and then, you need a jack-of-all-trades and Mario fits the bill. As far as stats are concerned, Mario is well-rounded across the board. None of his stats drop below 10, though most of his strengths lie in shooting and technique, which is good to have in a forward.

More importantly, Mario is perfect for beginners and can be easily molded to fit any team composition. That also means it’s entirely up to you as to what gear Mario will wear. If having a bit of a wild card is necessary, throw Mario into the mix.