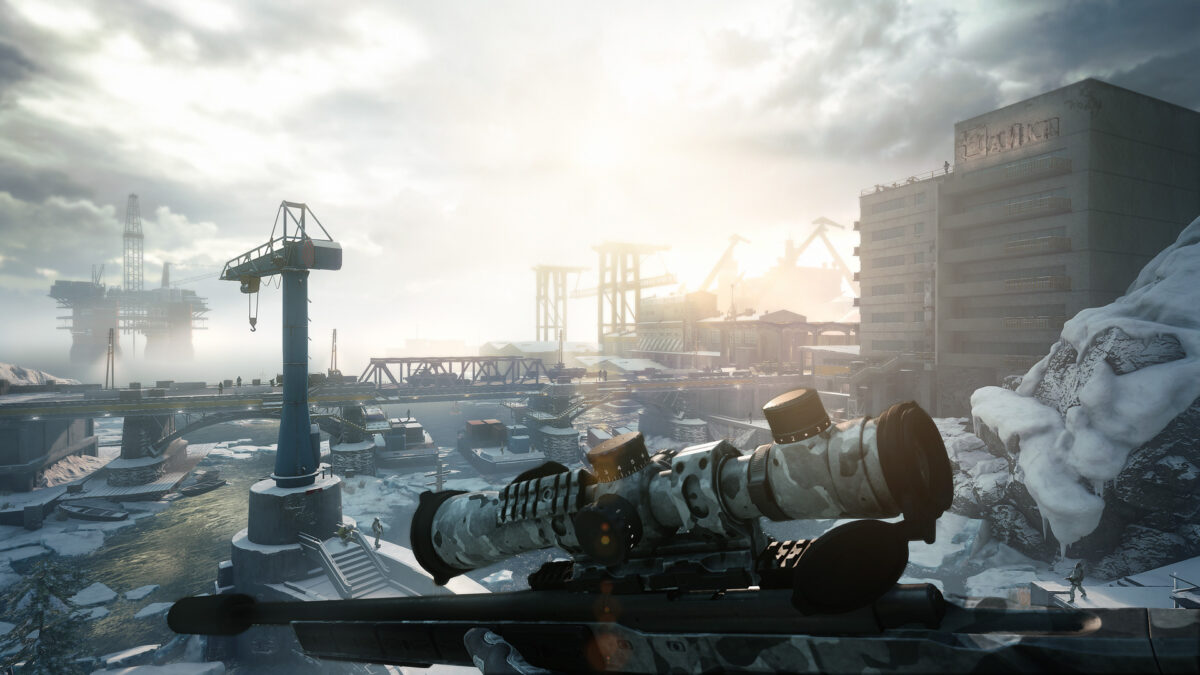 One of the more underrated and unsung gaming evolutions has been taking place in the sniping genre. Fans of these games have gone from shooting in a straight line to focusing on their breathing, taking in to account bullet drop and all the other subtle techniques for fast becoming the world’s best sharpshooter. Good sniper games are very hard to come by, but we complied a list for you so you wouldn’t have to go searching through your scope for them. Here are the top 10 best sniper video games.

It’s really hard to pick just one entry out of the many Sniper Elite titles, but Sniper Elite 4 is the best iteration to date showcasing how sniping and semi open-world level design can perfectly blend together.

Following the story of Karl Fairburne, you are a sniper sent to disrupt Nazi operations in Italy. As you slink around the semi open-world levels, you are given targets to eliminate however you see fit. Assuming you use the sniper, as the name of the game implies, sniping is as realistic as it gets tasking players to account for bullet drop, adjust their heart rate for perfect breathing and time sniper shots with environmental noise in order to maintain secrecy. It sounds simple until you’re knee deep in enemy territory with one false shot alerting every foe, but nothing beats the satisfying “X-ray killcam” that comes from the perfect shot.

The draw of the Sniper Elite series has always been the sniping, but Sniper Elite 4 saw a lot of improvements in the open-world design with tons of side quests and environmental kills to encourage players to replay levels. Not to mention, co-op was brought back allowing two players to dismantle Nazi operations together.

The Ghost Warrior series takes inspiration from Sniper Elite and applies it to a modern day setting which is a nice change of pace since modern sniping experiences are hard to come by.

If we’re being honest, the Sniper: Ghost Warrior series hasn’t received the best of reception mostly due to a lack of polish. That being said, developer CI Games has done their best to up the ante in each entry offering a bevy of improvements in the gameplay department. Whether it be increasing the sniping distance, with the newest entry boasting “extreme long-range sniping”, or improving the overall AI and stealth engagements, City Interactive have been hard at work crafting the perfect modern sniping experience.

If you’re up for the challenge of a punishing sniper experience, ARMA 3 will give you a run for your money.

ARMA 3 is one of PC’s premier military sims tasking you with doing anything you want with plenty of community mods pitting you in team based modes. As you load up a mode and choose a sniper, you discover how punishing of an experience the sniping is as it requires you to use a rangefinder, zero your scope and steady your breathing. Missing a shot can be the difference between life and death. Priding itself on realism, you can partner up with a teammate who will function as your spotter. Hopefully, your spotter’s eyes are as good as yours!

Although ARMA 3 is an older title, launching back in 2013, it still has a very active community and plenty of content for newcomers to experience. Don’t miss your chance to partake in this challenging experience.

PlayerUknown’s Battlegrounds is a good battle royale game giving 100 players a chance to duke it out for a chance to be crowned the best in the lobby.

That being said, PUBG features some of the best sniping mechanics around. When you pick up a sniper and find your first target, you have to account for common factors such as muzzle velocity, bullet drop, and travel time. It’s not easy, as sniping makes you an easy target for the rest of the opposition, but it’s quite a satisfying feeling when you knock down your target en route to that chicken dinner.

Despite the overall reception of Call of Duty and the yearly release cycle, Call of Duty has given gamers some of the most iconic sniping gameplay in modern gaming.

Whether it be “All Ghillied Up”, Call of Duty: Modern Warfare’s behind enemy lines sniper mission set in Pripyat, Ukraine, or Call of Duty: World at War’s “Vendetta” mission tasking players to assassinate a German officer, the story mode has always delivered very memorable single-player sequences focused on sniping. The multiplayer portion speaks for itself as sniping montages were all the rage when these games started growing in popularity. Nothing beats a 360 no-scope for the final kill of the game!

Since those early days, however, Call of Duty’s sniping formula has changed significantly with more customization options that impact how your sniper operates. Putting a silencer on will suppress your weapon’s noise but will reduce its effective range or slapping on that extended magazine will slow down your movement speed. This change arrived just in time for Call of Duty: Warzone forever shifting the arcade style of sniping to a more realistic approach.

The Battlefield series has been known for changing the scope of the FPS scene: for better and for worse.

Looking back at the early days of the Call of Duty and Battlefield rivalry for dominance of the FPS market, CoD focused on the more arcade style of play, while Battlefield went the complete opposite route with one of those differences being the approach to sniping. Battlefield introduced many gamers to the concept of bullet drop and leading targets, and while it was very tricky to master, nothing beats the feeling of defeating an enemy sniper from across the battlefield.

Outside of sniping, on the multiplayer front, your character was part of the Recon class giving you the ability to function as a spotter and a sniper in order to help your team turn the tide in your favor.

The Hitman series has always been about player choice and freedom. Choose how you want to complete your mission, minimize the casualties and escape cleanly have been the core pillars of this series for the past 22 years, and it’s worked exceptionally well. While the concept of getting up close and personal with your target is a fun game of cat and mouse, nothing matches the satisfaction of eliminating your target without them ever knowing you were there from the comfort of long range.

The Hitman series features a number of missions where sniping is an option, and while it’s not as complex as your ARMA 3 or PUBG, it matches the satisfying results when the job is done due to the high stakes of messing up. Make sure you hit your shots or the entire world will be alerted to the impostor.

If you find yourself thoroughly enjoying the sniping experience, in the newer Hitman games, there is a dedicated mode to partake in. Sniper Assassin sees players participate in unique scenarios equipped with only a sniper rifle and challenges you to complete the mission while throwing a few puzzles at you. Easy enough, Agent 47?

Home to one of the most well-known sniper rifles in gaming history, the AWP was made for those who don’t crumble under pressure. The AWP can one shot anybody in the server, but in the time it takes for you to line up your shot, your foe can wipe you in a blink of an eye. It takes a lot of time to master the timings and fundamentals to become a good AWP’er especially in the ultra competitive CS:GO environment. However, if you can master the AWP, there’s no better feeling in the game itself than wreaking havoc on the opposition with it.

In a much similar manner to the Hitman games, Tom Clancy’s Ghost Recon Wildlands gives players the opportunity to tackle their objectives in a multitude of different ways. Nothing was more satisfying than completing objectives with a sniper rifle in this tactical third-person shooter.

Wildlands took a different approach to sniping that really hasn’t been replicated in other Ubisoft titles. Snipers have normal bullet drop but also have other stat changing factors such as penetration for when you find yourself facing off against vehicles or advanced machinery. While the AI left a bit to be desired, if issues like that don’t bother you, get a couple of friends to tag along in co-op and snipe all the opposition away.

Arguably one of the harder first-person experiences to release in the past few years, Escape from Tarkov has managed to hook players due in large part to that “Souls-like” gameplay.

Load into an area with barebones gear with your only objectives being to survive in a PvPvE setting and find better gear. Tarkov is extremely tactical, to the point where it feels like a camper’s paradise, as players look to set traps for the unsuspecting to take their loot. The game empowers players with a variety of ammo calibers, attachments and stats to turn the average player into the optimal sniper to avoid the trappings of evil players. Be careful though; if you die in a raid, you lose all of that equipment you spent hours customizing.