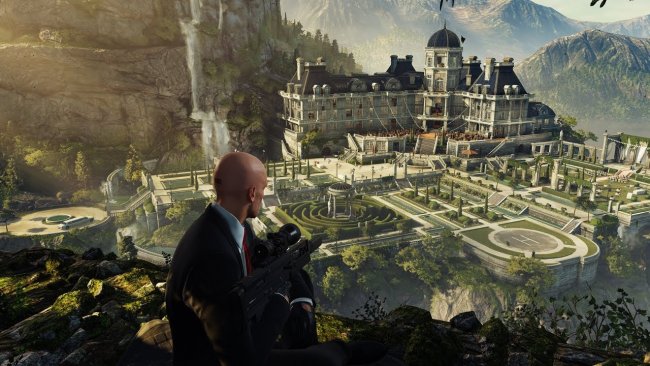 Following yesterday’s Hitman 2 announcement, I got the chance to play around with the new Sniper Assassin mode that was released as a pre-order bonus from the game. Similar to the sniper challenge mode from Hitman Absolution, Sniper Assassin tasks players with taking out their targets with nothing but a sniper rifle. Except this time, you get to take on the challenge with a friend, if you so choose.

This new mode comes with only one mission at the moment, and it takes place at a beautiful chateau in Austria. The mission here is to take out the remaining members of a notorious gang of thieves so that your contractor can inherit a massive fortune that they’d left behind. The mission presents you with three main targets, but the catch is that you’re also going to have to take out the 12 other bodyguards stationed around the house. You have a 15-minute time window to work with. If you run out of time, or if the targets are alerted to your presence and manage to flee the area, you fail the mission.

Look, I’m not exactly the biggest Hitman fan around, but give me a fun stealth sniper challenge to dive into, complete with precise shooting mechanics, and I’m all aboard the hype train. The shooting feels weighty and powerful in Sniper Assassin. Holding down the L2 button aims the weapon, and gently squeezing R2 to enters the game’s precision mode before you press down on the button to shoot. There’s a sense of exhilaration to be had from landing a headshot on a moving target and watching your score multiplier go up, and it only gets more enjoyable if you’re able to chain kill after kill during the mission.

Aside from the satisfying sniper rifle shooting, I was actually impressed by how IO Interactive managed to cram all the classic Hitman elements into this one short mission. As has been the case with almost every Hitman assassination mission, Sniper Assassin offers players a whole variety of ways to complete their task. One target can be taken down even before she gets off her chopper (though this will likely raise some alarm bells), or you could let her wander around the chateau for a while, and then shoot a fuse box to get an explosive kill on her. There are so many moving parts in this mission that you can take advantage of, such as shooting a board propping up a statue to cause it to collapse on a guard, or distracting a target by shooting at the water to change their patrol route. While my first playthrough of the mission consisted of me just silently sniping every target that wandered into my crosshairs (which is still very fun in its own right), there was far more satisfaction to be had from discovering new and creative ways to complete the mission.

Once you’ve played through the mission, you might consider diving into the co-op aspect as well. Unfortunately, the multiplayer portion is only available online, and there’s no matchmaking to speak of. But if you do find someone to play with, Sniper Assassin becomes a test of coordination between you and your partner. It becomes much easier to take out two different targets at once, and containing critical situations should be much easier with two guns. Of course, this can also lead to even more chaotic situations as killing too many people within a short span of time means that there are just more bodies for wandering civilians to discover. And we all know that killing civilians is a big no-no in Hitman games, lest you want your score to take a dip.

Despite there only being one mission so far, Sniper Assassin offers quite a bit of replayability due to the rifle upgrades you can unlock as you achieve higher scores, along with various optional objectives you can pursue during the mission. These include managing to hide a body by shooting it into the water, or sniping down all the birds you can find in the sky.

From what I’ve seen so far, Sniper Assassin is a very engaging mode that offers a nice break from the traditional stealth gameplay offered in the Hitman games. The online co-op aspect adds a new layer of depth and fun to the challenge, and I’m certainly looking forward to the rest of what IO Interactive has to add to this mode.