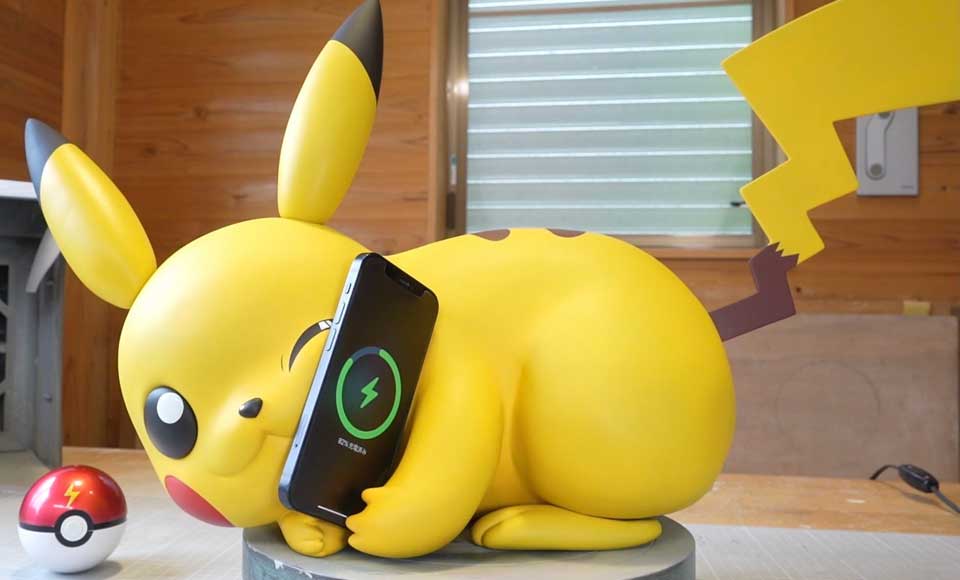 If you’ve ever thought about how great it would be to have a Pokemon help out with real-world tasks, this fan-made Pikachu statue is probably the closest thing we’ll ever see.

A Pokemon fan on Twitter, Clay Yoshirin, not only sculpted a life-sized Pikachu statue from scratch, but he also installed a working wireless charging pad inside of it.

Clay Yoshirin’s Twitter and YouTube channels are dedicated to sculpting Pokemon statues by hand. It only makes sense that Pikachu, the electric-type mascot of the franchise, would be picked as the Pokemon to pair with a wireless charging device.

The Pikachu statue is incredibly adorable on its own; the mouse Pokemon is curled up in a position laying down with its front paw sticking out in a way that will hold a phone against its cheek. Of course, its left cheek is the spot where the wireless charging pad is.

When a phone is placed on that spot, it actually charges it, and it even looks like Pikachu is talking on the phone.

Just take a look at some photos from Clay Yoshirin’s Twitter account of his brilliant creation in action:

This isn’t the first phone-charging statue that Clay Yoshirin created; last year, he sculpted a similar Pichu statue that also doubles as a charger for electronic devices.

If you’re interested in seeing exactly how Clay Yoshirin makes these unique sculptures, you can watch the video he created on the entire process of crafting the Pikachu phone charger from start to finish below. The talent is ridiculously impressive; you’ll have to watch it yourself to see why.

Unfortunately, these statues are all one-of-a-kind, so you won’t see them for sale anytime soon. While it might not be a very convenient charger to carry around, there’s no doubt that it’s the cutest phone charging device we’ve ever seen.

What other Pokemon would you like to see Clay Yoshirin turn into a charging device next?