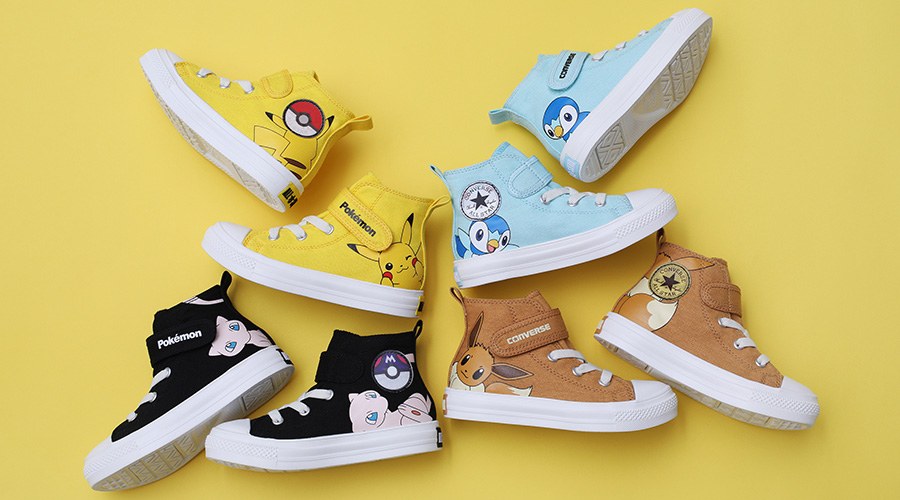 Pokemon products can get pretty creative in Japan, as we’ve seen a lot of lately. Now, Converse is teaming up with Pokemon (as reported by Soranews24) to release a limited edition line of shoes called the “All-Star Light” series for both adults and children in Japan, and we absolutely adore each of the designs.

The company has created unique designs for both adult-sized shoes and for child-sized shoes. On the adult-sized high-top shoes, a Pokemon is featured on the tongue; Pikachu, Eevee, Charizard, and Mewtwo are each represented. On the children-sized high-top shoes, there is a Pokemon design on the side near the heel; the choices here are between Pikachu, Eevee, Piplup, and Mew. There are also two sneaker-styled neon Pikachu designs with velcro straps in this line of shoes.

Each shoe also features a holographic ankle patch that changes from the All-Star logo to a type of Poke Ball design depending on the perspective from which it is seen.

The adult-sized Pokemon Converse shoes will be available for sale on the company’s Japanese website later this month and will be sold for 9,900 yen (approximately $75).

The children-sized Pokemon Converse shoes and sneakers are already available for sale for 6,600 yen (approximately $50).

As a bonus, the box the shoes come in is red and white in order to represent the visual of a Poke Ball.

While this specific line of shoes isn’t currently available outside of Japan, Converse’s American website has a few officially licensed Pokemon products, including two shoe designs featuring Jigglypuff and Meowth.

The special line of Pokemon converse for both adults and children will be able to be purchased on the official Converse Japan online store or at participating retailers in Japan.

Would you wear Pokemon-branded shoes? Let us know what Pokemon you’d most want to rep as you walk around each day.