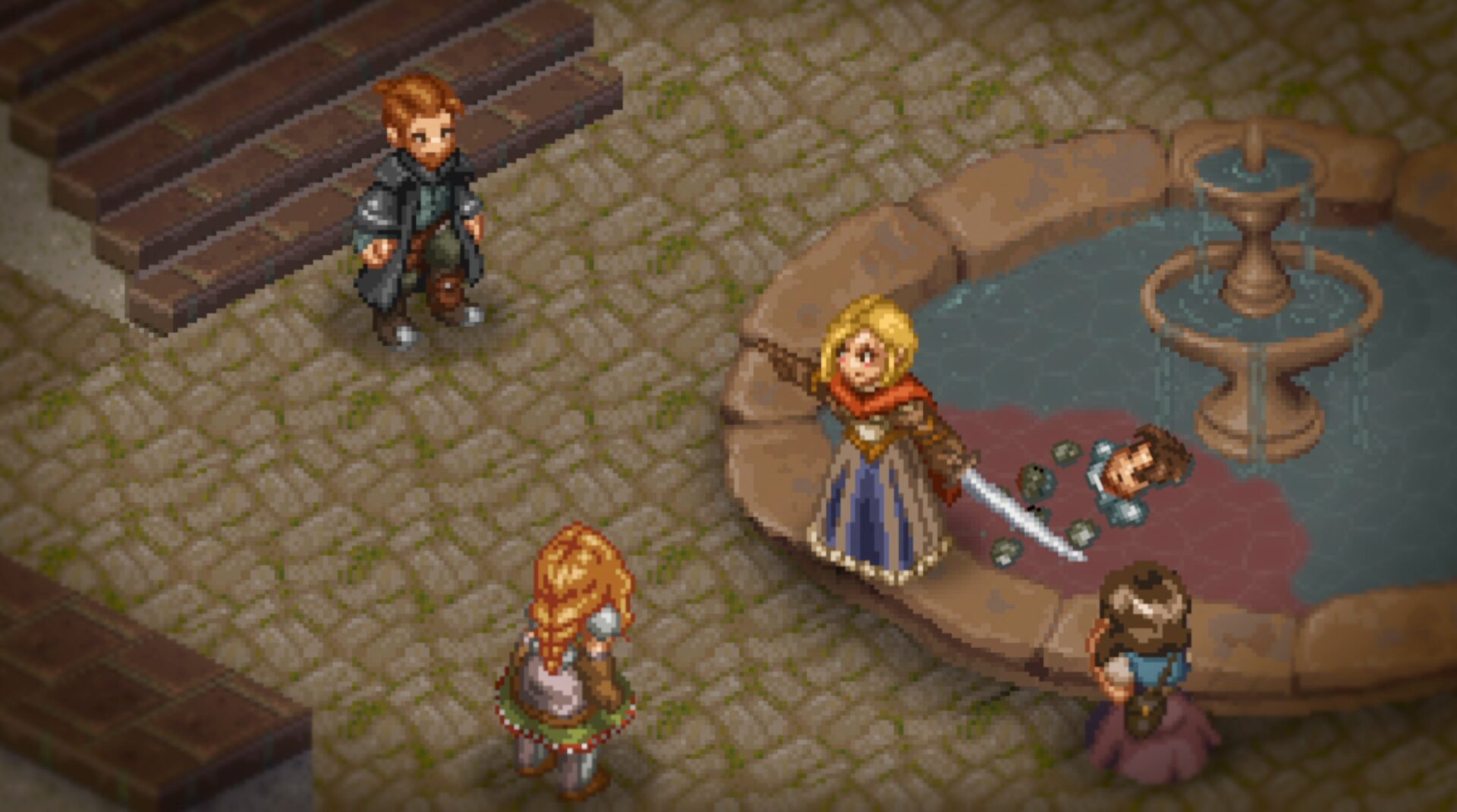 Arcadian Atlas has to be on the radar of any tactical-RPG fan from the late 90s and early 2000s. Inspired by classics such as Tactics Orge and Final Fantasy Tactics, Arcadian Atlas has always looked good on paper since its Kickstarter a few years ago, but as we know, on-paper doesn’t always translate to actual success, especially in the TRPG world. Fortunately, Arcadian Atlas appears to be delivering on its promises and has continued to look impressive as more content is released. At the Awesome Indies showcase at Gamescom 2021, Arcadian Atlas released a new trailer (watch here) that stepped up the intrigue on two of the critical portions of any good TRPG: the classes and the story.

We got a taste of Arcadian Atlas’ mature story. As you can see in the picture above, the game isn’t going to pull any punches when it comes to murder and political drama. There was also a look at eight of the twelve+ classes that are planned for Arcadian Atlas and they all look wonderful and distinct from each other. It should be a blast putting together a strategic force comprised of very different combat styles.

The only sad part is that we’ll need to wait until 2022 for the full release, and as of right now, it’s only planned to release on PC.

Terrorbane, on the surface without seeing really anything else, appears like a traditional RPG that has uses a retro visual style, very common in this day and age, especially on PC as many AAA developers have moved on from the genre. However, as yesterday’s new trailer showed, there’s a lot more going on here.

In Terrorbane, the hero will be going up against not only monsters in-game but a developer that constantly wants to try and change and improve the game. This disrupts the world around the hero, and they will be forced to contend with bugs and glitches to survive and make it to the end of the story.

Terrorbane is obviously very meta, and will feature references to iconic games in the genre, lots of fourth wall breaking, and irreverant game developer humor.

Sadly, you’ll need to wait until 2022 to start fighting bugs for the mysterious developer of Terrorbane

Between Terrorbane, Dice Legacy, and others as well, I have to give the Awesome Indies showcase credit, they put together a sizzle reel of some really unique and creative games.

Dice Legacy aims to mash roguelike and city builder genres along with elements of tabletop dice games all together into a unique management experience. You’ll need to build up your city as best you can while contending not only with evil forces lurking on the outskirts of your border, but also the roll of the dice. If things don’t go your way, you’ll need to find a way to adapt and adjust on the fly.

Dice-based games have started to pick up some steam recently and I’m all for it, especially when they’re being injected into something unexpected like a city management game. Combined with roguelike elements, you’ll hopefully be getting a unique experience every time you give the game a go.

Unlike some of the games show yesterday, Dice Legacy isn’t too far off either which is a nice surprise. It’ll be out on Sept. 9 for Switch and PC. Check out its trailer here to get a peek at how this unique combination will play out.

There Is No Light

As you can probably tell from the picture above, or the Awesome Indies trailer if you already gave it a look, There Is No Light is not a game for the feint of heart. In fact, it aims to be a very dark and gory action game set in a world with horrific beasts that need slaying.

Human civilization has collapsed and has been replaced by a religious society that worships some pretty questionable gods after being forced to live underground for some time. The main character’s child was taken away to be given to this seemingly malevolent god, and their father is pissed about that.

While I haven’t played it myself yet (a demo is available) the vibe I get is a mix of the original God of War’s trilogy story where you have a very angry main character looking to open a can of whoop ass on anyone getting in his way with fast-paced precision action reminiscent of Hades (minus the roguelike elements).

While we’ve gone heavy with the retro-feeling games on this list, that of course wasn’t all of the content at the Awesome Indies of course. Any one that’s a fan of action games, especially those in the vein of Devil May Cry should definitely have their ears perked by Soulstice.

It follows a pretty wicked premise where “Wraiths” torment the common people of the world of Soulstice, and certain people are reborn as Chimera. In this case, one sister, Lute, sacrificed her physical form to give her other sister, Briar, superhuman combat skills to fight the Wraiths. However, Lute is still around in the form of a ghost that can follow Briar wherever she may go.

Soulstice appears to be heavily story-driven around this dark plot, and should be filled with brutal combat and imagery as you blast through the game and perfect its fast-paced 3D action.

Those were some of our staff’s favorites from the Awesome Indies show yesterday, but what were yours? Let us know in the comments below.