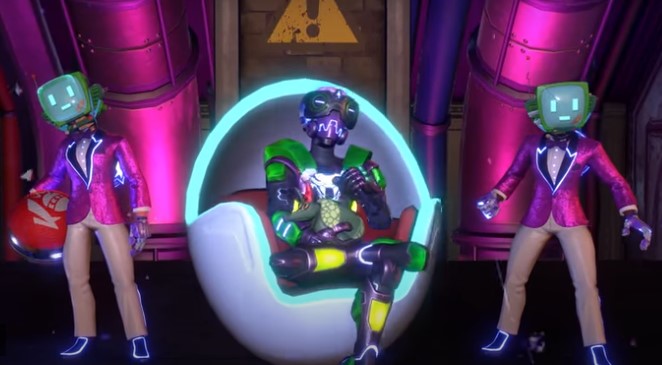 Earlier today during the EA Play Live stream, the team at Velan Studios dropped a brand-new trailer for Season 2 of their hit game, Knockout City. The theme for the trailer was “Fight at the Movies” and featured a number of film-inspired locations in a single map and new gear.

At the start of the trailer, there’s a character stomping around a miniature city in a robot costume, almost like a giant monster terrorizing the town.

The trailer also shows off an area with a large pyramid, a bridge that looks like it straight out of a fairytale, a bell being held up by energy streaming from two giant gargoyle-covered towers, a full castle, and a giant child’s bed like you’d see in Toy Story.

It appears that this map will cycle through these different layouts mid-match. As is shown in the trailer, a player is running across the roof of a building one second and then the next a castle just pops up around them.

A new type of ball was shown off that may force players to change up their strategies a bit. The new Soda Ball has a massive area of effect explosion that looks like it’ll be tough to dodge if your opponent’s throw is anywhere close to you.

At the end of the trailer, there’s a brief look at everything else new coming in Knockout City Season 2 besides the gear, Soda Ball, and the new map with shifting terrain. On top of all that, there will also be new playlists and new rewards. As of right now, there’s no indication of what all of the new playlists or rewards will be. Season 2 of Knockout City starts on July 27.

The official announcement trailer for Knockout City Season 2 can be found below.

And if you just can’t get enough reveals from EA, then you’ll want to check out the full EA Play Live stream down below.