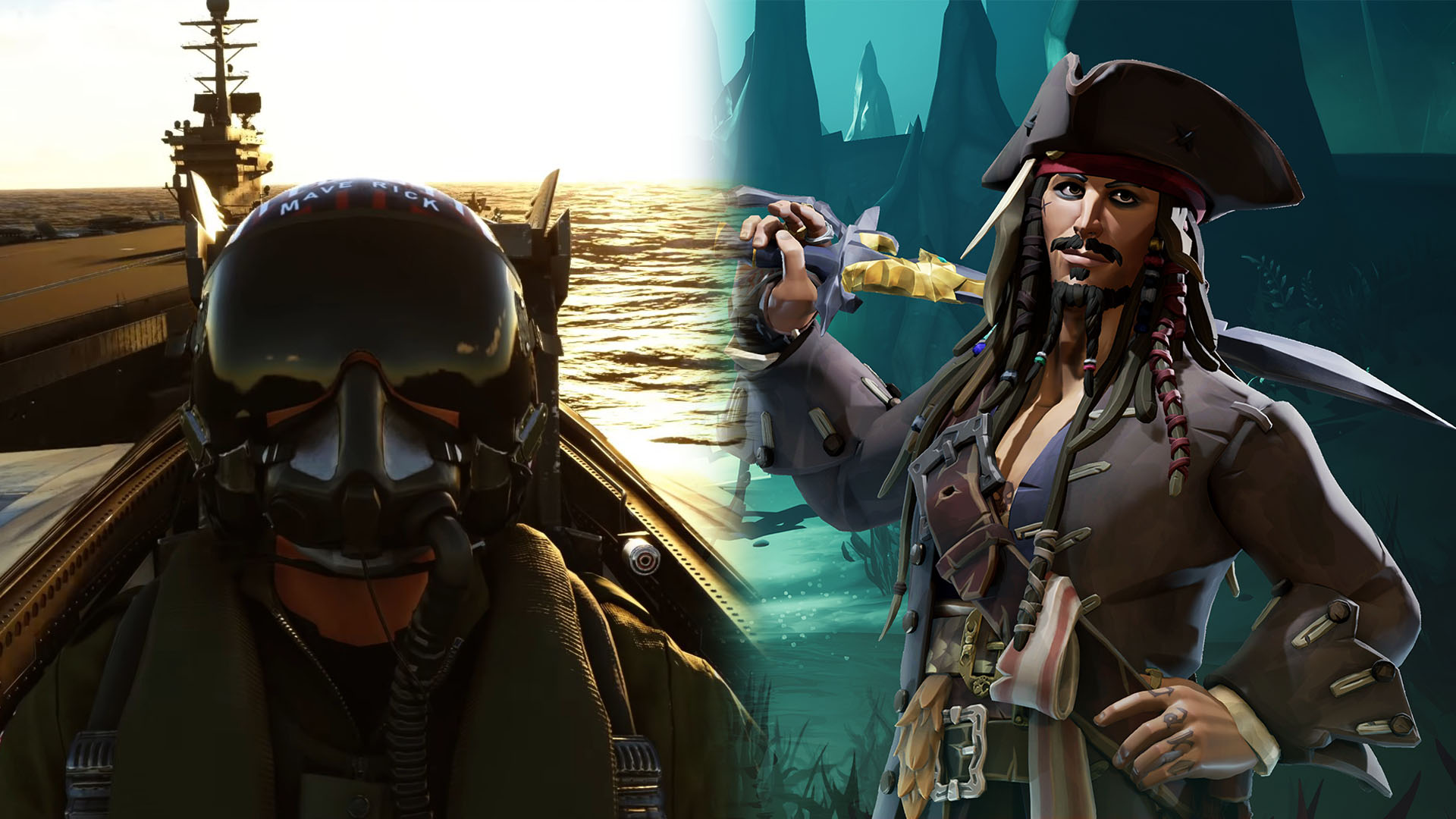 During its E3 2021 showcase, Microsoft announced Pirates of the Caribbean for Sea of Thieves and Top Gun: Maverick content for Microsoft Flight Simulator, and it’s potentially a very big deal.

Sea of Thieves: A Pirate’s Life has just been released yesterday, starring Jack Sparrow and his gang in a rather sizable expansion, propelling the game to top of the best-sellers list on Steam, where it still sits at the moment of this writing.

The Top Gun: Maverick expansion for Microsoft Flight Simulator will come in November, following the release of the game on Xbox Series X|S (on July 27) by a few months and matching the debut of the film.

Of course, the fact that both expansions are completely free for players of both games certainly adds to their value. Collaborations with popular IPs aren’t exactly an innovation, but they’re usually most widespread in mobile games, which use them often to achieve a steady stream of popularity spikes and grab the attention of potential new users.

Looking at A Pirate’s Life, Microsoft seems to strongly believe in this kind of tactic for its own games-as-a-service. It’s a lot of fully-voiced bespoke content, which means that the budget for its creation must have been considerable.

Yet, it’s undeniable that it’s a match made of heaven for Sea of Thieves. The game shares Pirates of the Caribbeans’ comedic atmosphere, and the possible overlap between the two fanbases is obvious, as it allows fans to live out their dream of creating their own Jack Sparrow and Black Pearl.

It’s rather safe to assume that a sizable percentage of Pirates of the Caribbean fans will be charmed by the Sea of Thieves’ atmosphere, which is so similar to something they already enjoy, and may continue playing it in the future.

The Top Gun-themed expansion for Microsoft Flight Simulator is a bit more mysterious in nature. We know that there will be a flyable F/A-18E Super Hornet, a carrier, and possibly another aircraft.

Given the nature of the simulator, I certainly wouldn’t expect weaponry and dogfights, but the addition of a military aircraft to the already rich lineup is certainly a big attractive, as much as being able to fly it low and fast through the sim’s many canyons.

It’s certainly not the first batch of content coming to the simulator at no additional cost. Microsoft has been expanding it with bi-monthly World Updates that have already embellished several regions and that’s going to continue in August and for the foreseeable future.

Those are already quite attractive for the audience interested in those regions, but a tie-in with a beloved Hollywood franchise like Top Gun will likely attract a much broader crowd (military aircraft tend to have a wider appeal than civilian ones), and it’s perfectly timed with when the initial popularity surge for the Xbox launch is likely to start slowing down, bringing many right back into the fold on top of attracting plenty of new potential pilots.

Enthusiast simmers who are likely to be already hooked and to be potentially less sensitive to the glitz of a Hollywood tie-in will still have something to look forward to: the addition of the F-18 will pave the way to a proper implementation of afterburners and supersonic flight, which at the moment Microsoft Flight Simulator lacks.

Ultimately, I see these collaborations as one of the best ways to do Hollywood tie-ins. We often see the launch bespoke games, but they normally become irrelevant shortly after launch and tend to be light on quality because they focus exclusively on taking advantage of the IP without really providing compelling gameplay experiences.

In this case, the tie-in content is provided within games that are already great on their own. There is also an obvious overlap between the fanbase of the games and that of the movies, which means that not only existing players are going to appreciate the content, but new ones that came for the tie-in expansion may likely stay for the original game as well.

Of course, the good folks at Microsoft aren’t doing it out of the goodness of their hearts. Both Sea of Thieves and Microsoft Flight Simulator are full-fledged games-as-a-service with extensive monetization schemes. This means that attracting many new users and retaining existing ones is going to likely deliver a very healthy increase in consumer spending within the related marketplaces. Many may even subscribe to Game Pass in order to gain access to the games inexpensively, which certainly doesn’t hurt.

This is certainly a potential slam dunk for Xbox. While the gaming audience has grown to the point that it may even eclipse Hollywood, movies remain an extremely strong entertainment medium.

Drawing their fanbase to games where it makes sense (and the two tie-ins announced at E3 certainly do make sense) and where they’re welcomed by pre-existing quality that can encourage them to stay is likely a solid move, and I wouldn’t be surprised if we saw more of this going forward.