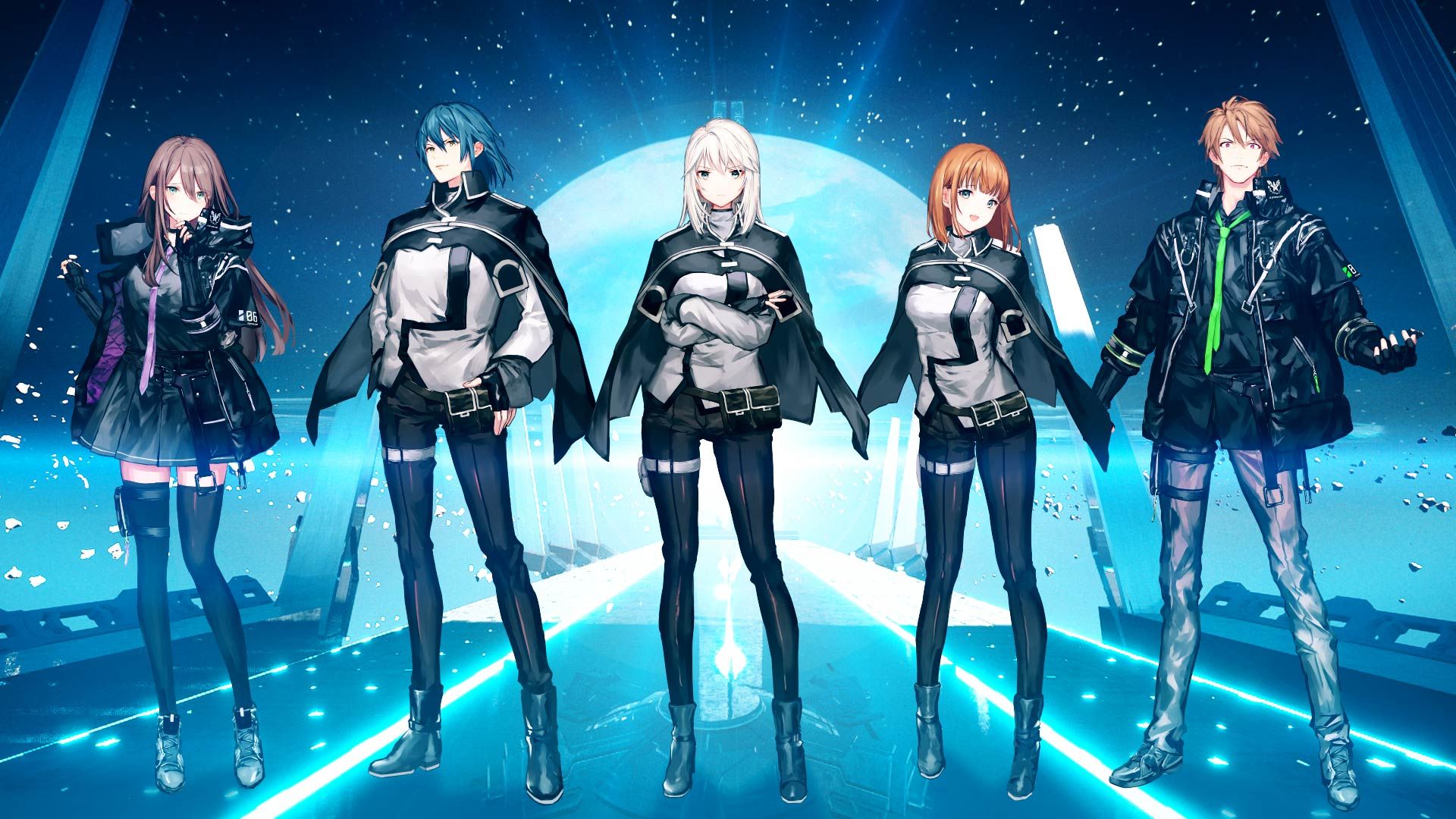 This time around we learn about some of the enemies (named Relayer) and members of other human organization who may be friends or allies of our heroes.

Ouji Hoshino is voiced by Jun Osuka and is a sergeant at the United Earth Government Army’s Moon Base. He survived the attack to the Lunar habitation colony by Luna and the Relayer and met Observer, who informed him of the Relayer threat.

Secretary of State Greyson is voiced by Hiroyuki Takanaka and he leads the United Earth Government Army. He’s known as a hardliner hawk in the military and his policy is “defending Earth with the power of Mankind alone.” He also has the 404th Satellite Force under his direct command, which includes Satellites (artificial Star Child).

Observer is voiced by Yuuki Fujiwara. He’s an inspector dispatched by the government to the hypergravity test starship Asterism. He wears a mask at all times to cover a disfiguring wound from his past. He is a mysterious man who has ties not just with the army, but also with the Star Child and even the Relayer.

Eight is voiced by Nanaka Suwa and is a member of the 404th Special Satellite Task Force of the United Earth Government Army. She is an enhanced human being (Satellite) who has been found to have an affinity with the GY particles and has been given powers similar to the Star Child. Before being assigned to her current post, she was Sun’s subordinate.

Nile is voiced by Ayumi Takeishi and she is also a member of the Satellite force and Himiko’s childhood friend. After the aptitude test that determined her suitability to become a Satellite, she was recruited to take over Himiko’s fate.

Azure is voiced by Moa Tsukino and she is a new member of the Satellite force tasked with fighting the Relayer. She is a junior to Nile and Eight, and her cute appearance and hard-working personality make the other members love her.

The Chairman of ATLAS is voiced by Seiji Kato and he’s an older gentleman at the top of the large corporation based in Belgium. He also owns the paramilitary unit led by Mintaka, with the goal of acquiring GT Labo’s hypergravity technology. Due to his age, he’s looking for his successor among his many children.

Mintaka is voiced by Ayano Yamamoto and is a Star Child carrying the will of the star Mintaka. She is the captain of the Star Force, the pirate-like arm of ATLAS Space Pirate Star Force, and a candidate for the succession to the role of the chairman being the daughter of his mistress.

Alnilam is voiced by Akane Kohinata and is a Star Child carrying the will of the star Alnilam. She is also the vice-captain of Mintaka’s unit. She loves her more than anything else and she’s always there to support her, not only on the field but also in life.

Alnitak is voiced by Genki Okawa and is a Star Child carrying the will of the star Alnitak. He is the secretary, treasurer, general affairs officer, and public relations officer of Mintaka’s unit. He has a crush on her and is working hard on his housekeeping skills in order to win her over.

The Chairman of Xoth is voiced by Ellen Taira and leads a giant corporation that has grown rapidly in recent years. She has a lot of ambition and aims to acquire GT Labo’s hypergravity technology by force, if required. She is rumored ton be cooperating with the Relayer, but whether this is actually true or not is unknown.

Dark Knight is voiced by Shunpei Fukuma and is a Master-rank Relayer serving the God Relayers faithfully. His manners are polite, but he’s cold-hearted and will not hesitate to deal ruthlessly with anyone who disobeys orders. He doesn’t seem to care all that much about the extinction of the stars, but he seems to have a soft spot for Mars.

Dark Walker is voiced by Arisa Noto and is a Master-rank Relayer working to revive a God Relayer. She may look like a young girl, but she’s 100 million years old. She has a different set of values compared to the other Master Relayers, and appreciates the beauty of the stars.

Dark Lord is voiced by Sakura Nagaki and is another Master Relayer on top of the head of the Elysium Cult, an apocalyptic religion popular on Mars. To lead humanity to the ideal world of Elysium, she is plotting to cause other GravityLoss catastrophes both on Earth and on Mars.

Venera is another member of the 404th Special Satellite Task Force voiced by Erika Yoshizumi. She has a strong personality and often mocks Ouji Hoshino by calling him “newbie commander.” Due to her personality, she gets along well with Eight.

The Chief Engineer is voiced by Yoshihisa Hosokawa and works for the government under Grayson’s orders. He’s responsible with the research and development of the “Mercurius” anti-Relayer weapon. He’s also involved with House of Stars, a human resources development organization for pilots. Lastly, he’s acquainted with Luna.

Mizuno is voiced by Haruka Okaki is a pilot of the United Earth Government Army and a former classmate of Ouji Hoshino. She was assigned to the team handling the R&D of new weapons, but she was lost in an explosion.

The “Voice Log” is voiced by Mika Okamoto and belongs to the pilot of the Original One stella gear mecha. She’s a warrior from an ancient galactic civilization who escaped the Relayer through warp space to keep hope alive in the future.

Black Commander is voiced by Yohei Otomo and is an officer of the Relayer Army, one rank below the Master Relayers in charge of the raids against Asterism and the defense of important bases, covering a divers range of roles.

You can see all the characters mentioned today in the gallery below.

Do keep in mind that while today we got the introduction of the Japanese voice cast, the game will also come with an optional English voice track. The English cast has not been announced yet.

Relayer will be released simultaneously worldwide for PS4 and PS5 in 2021. If you’d like to learn more, you can check out the original reveal and the first trailer with additional details.