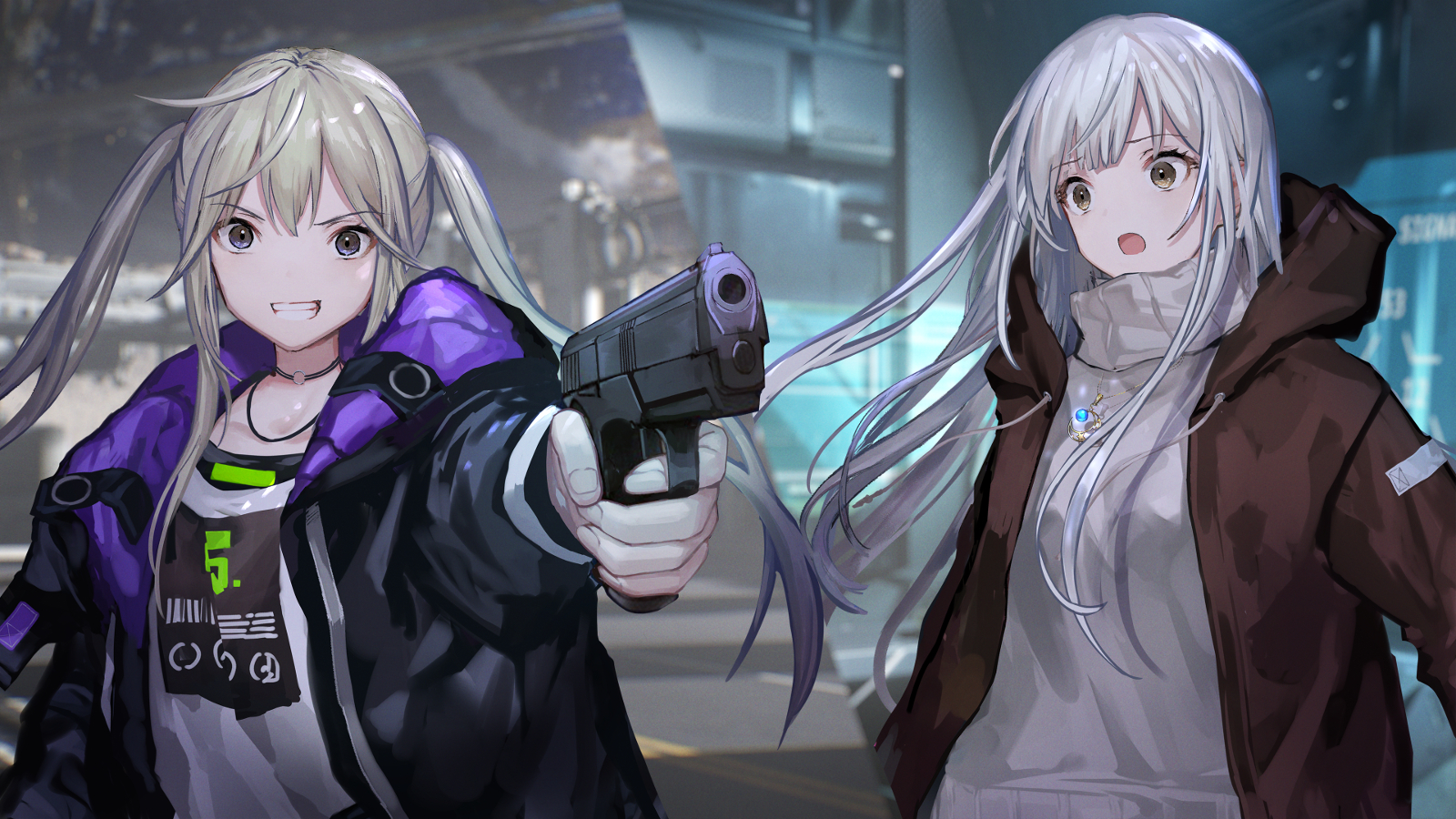 Today’s assets focus on the crew of the hypergravity starship Asterism and the staff of the organization named GT Labo that supports the ship.

As we already know, the story is focused on people with special abilities called “Star Child,” who have been awakened by the Will of the Stars. The protagonist is named Terra, who personifies the will of the Earth. The story revolves around her including her separation from her sister Luna and her first encounter with the Star Child Himiko.

Below you can find all the new assets and read a description for each character below.

Terra is voiced by Satomi Akesaka and she is associated with the Will of Earth. She is the protagonist of the game and she has lost her memories after being involved in a disaster called “GravityLoss.” One of the few memories she has left is letting go of the hand of her sister Luna, letting her die. She travels aimlessly with her AI partner Yodaka.

Yodaka is voiced by Taiten Kusunoki and is an assistant drone built by Terra from junk parts. Due to its advanced AI it doesn’t just support Terra, but also acts as a conversation partner. While it calls Terra “master” their relationship is more akin to equals.

Himiko is voiced by Miku Itou and is a special Star Child carrying the will of the celestial body Himiko. She is the one who is destined to unite the Star Child and to fight the Relayers over the fate of the universe. Originally, she was a normal girl and an astronomy nerd who loved the stars.

Luna is voiced by Moe Toyota and carries the will of the Moon. While she is a Star Child, she works with the Relayer to take revenge on humanity and steal the Stella Gear mecha called “Original One.”

Sun is voiced by Mie Sonozaki and carries the will of the Sun. She used to be an ace pilot of the United Earth Government Army. Due to her background and rank, she is a reliable squad leader in the battle against the Relayer.

Mercury is voiced by Mariko Honda and I think I can stop telling you who carries the will of which celestial body, at this point. She doesn’t show her emotions often, and she has the typical personality of the serious girl wearing glasses. Those around her often misunderstand her as antisocial, but she is a hard-working girl who often trains in secret to replace her older sister, who was her predecessor as Mercury’s Star Child.

Uranus is voiced by Kumi Sakuma. In order to pay her debts, she became the Asterism’s doctor lured by the high salary. While she has a weak spot for money and has a very relaxed personality, she is actually a very skilled doctor. However, she’s actually unlicensed.

Amanogawa is voiced by Hitomi Yoshida and carries the will of the Milky Way (Amanogawa means “Milky Way” in Japanese). She is the heir of Amanogawa Shipyards, the world-leading shipbuilding company. She is an elegant young lady who adheres to “Noblesse Oblige” but deep inside, she’s a subculture geek.

Halley is voiced by Ryo Kikuchi and carries the will of the Halley’s Comet. He is a member of GT Labo’s Intelligence Division and the right-hand man of director Neil. He works on the field with Jupiter and Saturn and is responsible for backing Asterism and protecting GT Labo’s headquarters. He can use the power of Halley’s Comet for fortune telling.

Jupiter is voiced by Yuuto Suzuki and is a test pilot as well as a Star Child. His job is testing a new weapon for the Engineering Division of GT Labo. He’s also the older brother of Saturn and a former mercenary for the Xoth corporation. He has the ability to discern the true identity of others thanks to his keen intellect. On the other hand, he’s also affected by a severe sister complex.

Saturn is voiced by Moa Tsukino and also works as a test pilot with her brother. Shy and reserved, she is the typical homebody whose hobbies include games, manga, and the internet.

Pluto (voiced by Asami Sanada) is actually an AI, and a Star Child at the same time. Since the will of the stars usually awakens in living being, her awakening proves that Artificial Intelligences have a life and a mind of their own.

Mars is voiced by Hina Kino and she is a world-famous eSports player who was trained by her father. As a result, her piloting skills are impressive.

Captain Gillian is voiced by Youji Ueda and is the commanding officer of the Asterism and a fierce war veteran who used to work for the United Earth Government Army. His leadership abilities are backed up by extensive battlefield experience and have earned him respect not only from the bridge crew, but also from pilots and mechanics.

Media is voiced by Ayano Yamamoto and she is a communication officer on the Asterism. She is simply an ordinary person, neither a Star Child nor a Soldier.

Genjiro Akeboshi is voiced by Hideki Kojima and is the head of the maintenance crew of the Asterism. He’s Venus’ grandfather and an experienced mechanic who is basically the living embodiment of the craftsmanship of the Showa Era [1926–1989]. He’s stern and unsociable but his skills are top-notch, earning him the trust of the other mechanics and pilots.

Venus is voiced by Arisa Noto and despite being a Star Child, she works on the Asterism as a mechanic, supporting the pilots with her maintenance skills rather than in actual combat.

Isaac is voiced by Takehiro Hasu and is the director of GT Labo’s Defense Division. He’s a reliable man in charge of the overall management of the company. He’s also a workaholic who often sleeps in the office, which some times draws heat from Neil. He’s popular among the female staff, but he pays no attention at all to them.

Neil is voiced by Kyosuke Mano and is the director of GT Labo’s Intelligence Division. He oversees information gathering including details about the military and various organizations and personal investigations. He’s in good terms with Isaac and Halley is his subordinate.

While this is quite the star-level cast, with many veterans of the Japanese voice acting industry, do keep in mind that the game will also come with an optional English voice track. The English cast has not been announced yet.

Relayer will be released simultaneously worldwide for PS4 and PS5 in 2021. If you’d like to learn more, you can check out the original reveal and the first trailer with additional details.