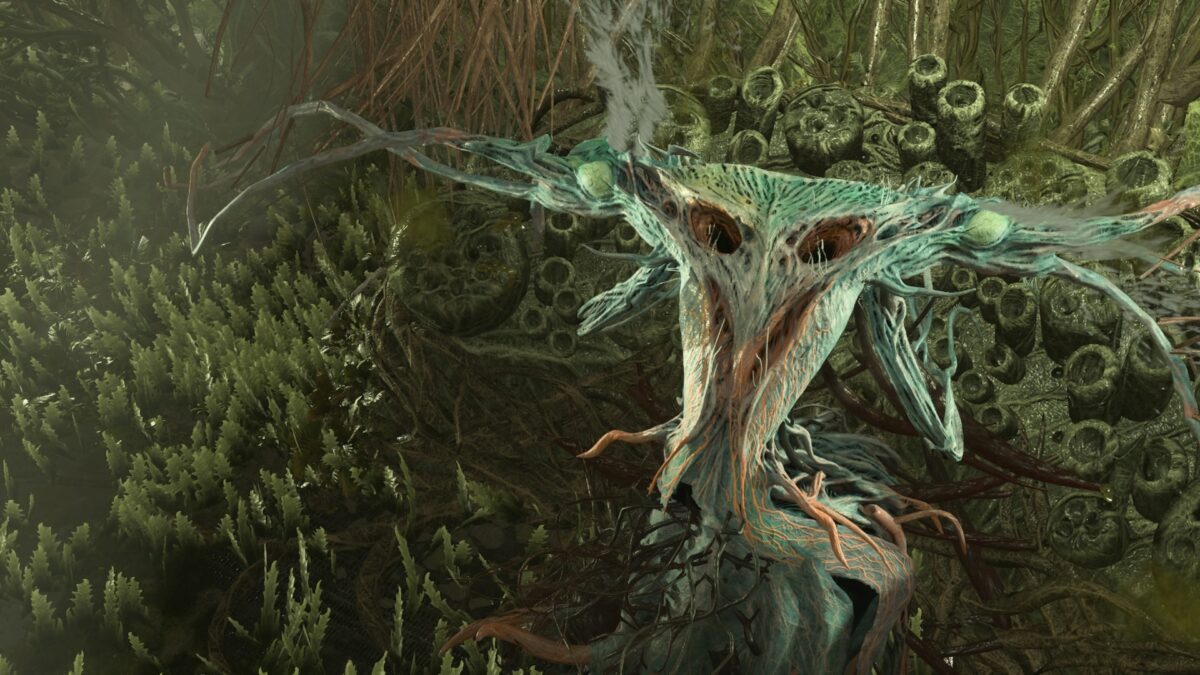 Returnal is full of enemies that can end your run at any moment, but none are more fearsome than the bosses. After getting past Nemesis, Hyperion may seem a bit tamer by comparison. But if you need some pointers, read on. Here’s how to beat the Hyperion boss battle in Returnal’s Echoing Ruins.

How to Beat Echoing Ruins Hyperion Boss in Returnal

You can actually use one of the close-range weapons for this fight if you like them. I’d still advise against it just so that you have more room to maneuver, but still.

I would, however, highly recommend using the Electropylon Driver with Pylon Web, the Hollowseeker with Serrated Projectiles and Split Stream, the Tachyomatic Carbine with Leech Rounds and Hardened, or the Modified Sidearm with Homing Missile and Shrapnel. Alt-fire modes like Blast Shell, Killsight, or Vertical Barrage work well here since the boss doesn’t move around too much.

In Hyperion’s first phase, it doesn’t even bother to look at you. It’ll stay stationary as it plays a plant-like organ that showers the area with energy orbs, pellets, and waves. Never stay in one spot for too long. There’s plenty of space to move here, so use it to strafe, jump, dash, and even sprint around whenever necessary.

First off, blue pellets will home in on you quickly. Pick a direction (left or right) and strafe, then dodge at the last second in the opposite direction to avoid them as they begin to hit the ground. You can also go into an all-out sprint in one direction as they get close to get away from them, but that means you’ll have to stop firing, which isn’t ideal.

Hyperion’s orange and green energy orbs that rain down are slow-moving and don’t track you, meaning they can be avoided with constant strafing and carefully timed dodges. Another easily avoidable attack is a ring of energy that covers the ground. Simply dash through it or jump over it.

As the phase progresses, Hyperion will also use a purple laser that sweeps across the area. Jump over it to stay safe while saving your dodge for projectiles that’ll be coming at the same time.

Hyperion finally gets up from the organ in this phase and you’ll wish it hadn’t. This phase will bring many more projectiles to dodge, but this time, they’re coming from Hyperion instead of the organ.

The good news is that the blue pellets and energy orbs will act the same way as they do in the first phase in terms of speed. The bad news is that there are now red and blue orbs being fired as well. They’re both fired in waves that can be jumped over if timed correctly. The worst thing you can do here is dodge constantly, even if things look crazy on-screen. Save dodges for when you absolutely can’t avoid an attack with regular movement.

As if you didn’t have enough to worry about, tendrils will also periodically pop up from beneath you. Whenever you see the ground glowing red like in the image above, you need to dodge or sprint out of there as soon as possible.

This is when Hyperion goes absolutely nuts. All of the previous energy orb attacks continue here, but they’re fired off one after the other in quick succession, or even all at once. Remember to pick a direction and never stop strafing left or right. Don’t get stuck doing a little circular dance in one spot for too long.

The one new attack that may catch you off-guard is one where Hyperion traps you in a corridor made of thorny plants. You can’t escape, but don’t panic. Just focus on moving left or right as the energy orbs slowly come toward you. This little trap isn’t as bad as it seems, but don’t dodge too much here because you don’t want to hit the thorns.

Keep these facts in mind: blue pellets will always track you, the purple laser sweeps across the field, blue and orange orbs come in waves in your direction from Hyperion or from the sky, red orbs cover certain areas, green orbs go out in all directions, and tendrils come from underground when the grass turns red.

The colors aren’t just cool to look at, they’re important indicators of patterns that don’t change. Do your very best to memorize them as you move, and never let go of the trigger as you evade it all to whittle down Hyperion’s health.

That’s everything you need to know about how to beat the Hyperion boss battle in Returnal’s Echoing Ruins. Memorizing the specific patterns for each colored attack is the key here, but you can do it. If you need any other tips and tricks for getting through Returnal, check out our guide wiki.