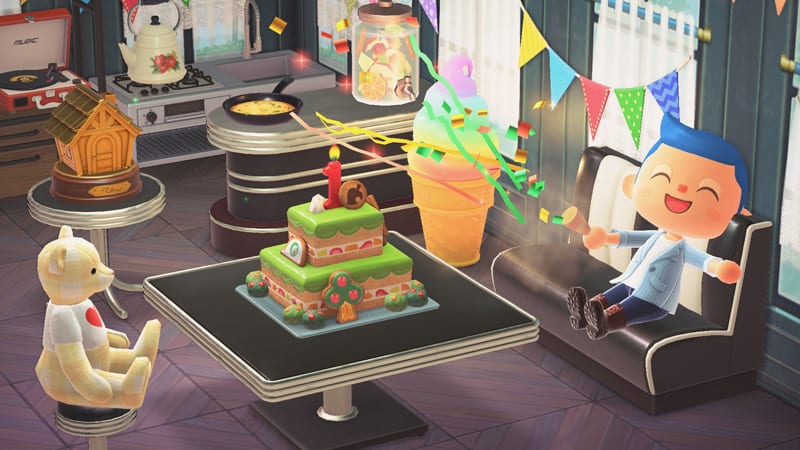 It’s been about one full year since Animal Crossing: New Horizons was released. Updates to the game have been coming in waves every few months, and now we have information about some changes coming for the one year anniversary.

Particularly, some of these changes are quality of life updates and some modifications to the infamous Bunny Day event that fans weren’t so fond of last year.

The Nintendo website shared that over 12 million custom designs in the game have been created since the game’s launch, so the first part of the update is that 50 additional custom design slots will be added to both the Normal and Pro Custom Design modes.

A Custom Design Pro Editor + feature will also be sold at Nook Stops for Nook Miles, which will allow you to customize umbrellas, small flags, uchiwa, and photo stands.

A custom design portal app will also be added to Nook Phones, meaning you’ll be able to browse online for new designs 24/7 without needing to visit the kiosk in the Able Sisters store.

Next, Sanrio Collaboration Pack amiibo cards will be sold at Target stores across the US, and using these will allow you to invite six Sanrio-inspired villagers to live on your island and buy special Sanrio-themed furniture items.

A limited-time service is starting on March 23 that will allow you to use your screenshots and videos to create a custom poster and trailer for your island. This will be called the Island Tour Creator, and it will allow you to showcase your favorite areas of your island to show off what makes it so special.

New seasonal items will be added to the game. A 1st anniversary cake will be sent to all players’ mailboxes. For April Fool’s Day, a whoopee cushion can be ordered from the in-game Nook Shopping service store between March 26 and April 1.

Prom season fashion items can be purchased at the Able Sisters store throughout April, and prom-themed items will also be available.

There are also some additions to the Bunny Day event, which is back this year on April 4. There’s still the same collecting and crafting of eggs as last year, but this year you can visit Nook’s Cranny from March 28 to April 4 to get a brand new Bunny Day themed item each day.

Finally, in late March, the Nook Link within the Nintendo Switch Online app will receive an update. You can collect a new currency called Nook Points each day by visiting the app, and those points can be exchanged for prizes in the game.

You can read all about the one year anniversary update and see some screenshots on the official website right here.

In other Animal Crossing: New Horizons news, Super Mario Bros. themed items are also now available in the game, and a collaboration with Build-A-Bear workshop is in the works.