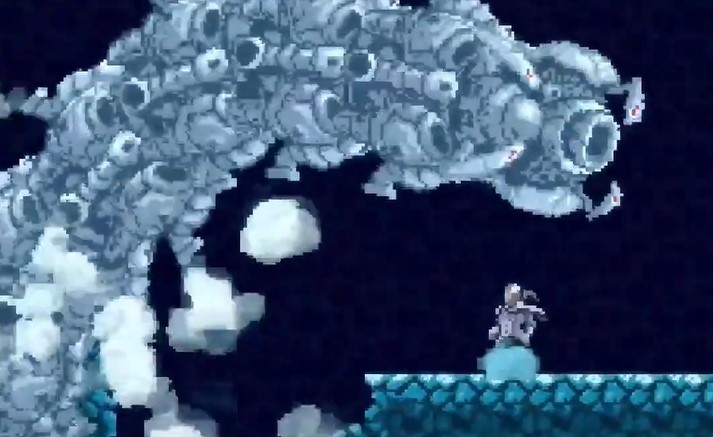 Earlier today during the Epic Games Store Spring Showcase, it was revealed that the indie Metroidvania title Axiom Verge 2 will be releasing “soon” on Epic Games’ PC storefront this year.

The trailer featured a number of new features to the series like climbing, the boomerang, and the remote drone. At the end of the trailer, we get to see that drone enter a mysterious portal.

On top of that, there are all kinds of new abilities that are as stunning to look at as they are useful. In the trailer we see the player character turn into a bunch of scattered pixels and create an explosion that opens a brand-new path.

But even more impressive is the enemy art. The giant flying ox-like monster strapped with cannons and a gatling gun makes another appearance. The trailer also features an enemy that looks like a giant mechanical worm with steam or smoke exhausting from pipes all over its body.

Both are a wild sight to behold and will undoubtedly require a massive amount of skill and power to take down.

Before this event, the only confirmed platform for Axiom Verge 2 was the Nintendo Switch in 2020 before being delayed to 2021. Now the franchise will make its return to PC. There’s currently no indication if the game will be releasing on other consoles, Steam, or GOG.