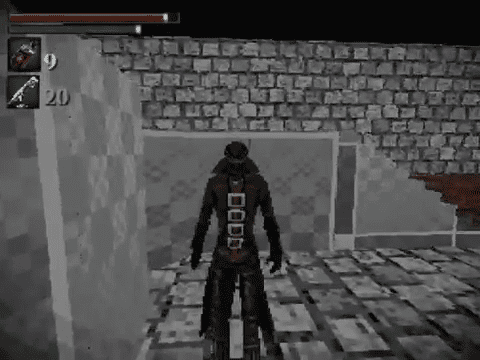 Bloodborne is perhaps the most beloved of all Souls games, lauded in particular for the eerie ambiance of its dreary gothic streets and the terrifying design of the creatures who lurk them.

Personally, it’s always reminded me of childhood days half hiding under my blanket playing Kalisto Entertainment’s creepy 1997 PSOne hack-and-slash Nightmare Creatures. So, imagine my delight today in seeing the efforts of one talented developer who’s been slowly putting together a demake of Bloodborne!

This Bloodborne PSX dev thread starts with loading and a proper loading screen! Now that we’re hopping between levels I need to write a save and load system that passes data around for proper navigation 🧵 pic.twitter.com/MHhMC1ouUE

Lilith Walther is a UE4 Tech artist/engineer currently working on the indie JRPG Witch from Heartstrings Studios, but in her spare time, she’s been forging the amazing demake showcased on her Twitter today.

If you actually click into the Tweet above you’ll find a whole thread recapping her progress so far, which has been ongoing since 2017. Recent milestones include a character customization mechanic and save system.

By the sounds of it, the plan is to make something that’s actually playable, as opposed to it simply being a tech showcase.

If that’s the case, let’s hope it’s easier than I remember Nightmare Creatures being back in the day! Speaking of which, Walther’s seems to have introduced a number of features not present in the original game in the interest of balancing the difficulty. There’s now a healing mechanic, and some enemies that would typically insta-kill you have been toned down.

Finally, here’s an awesome demake version of the Hunter’s Dream cutscene Walther’s made, which I found on her YouTube channel: